Subscribe
6 Locked down…. but not knocked out ‘ I t f e e l s l i k e b e i n g i n a b a d m o v i e ’ The coronavirus crisis has affect- ed the lives and businesses of many in the global recycling scene. How are recyclers, t...
Read the entire page 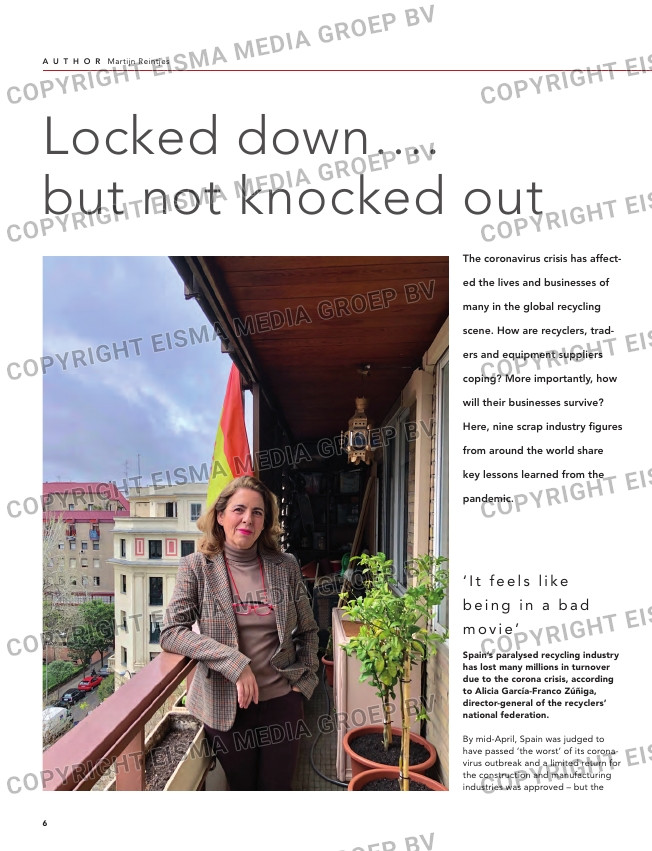 Locked down….
but not knocked out

The coronavirus crisis has affect-

ed the lives and businesses of

many in the global recycling

scene. How are recyclers, trad-

will their businesses survive?

key lessons learned from the

Spain’s paralysed recycling industry
has lost many millions in turnover
due to the corona crisis, according
to Alicia García-Franco Zúñiga,
director-general of the recyclers’
national federation.

By mid-April, Spain was judged to
have passed ‘the worst’ of its corona-
virus outbreak and a limited return for
the construction and manufacturing
industries was approved – but the

general population still had to remain
at home. The good news was that the
‘fire’ was coming under control.
‘Slowly but surely we begin to see
some kind of light at the end of this
dark tunnel,’ says Alicia García-Franco
Zúñiga on the phone from the balcony
of her apartment in the centre of
Madrid.
With almost everyone else in the
Spanish capital, García-Franco Zúñiga
has been locked down in her home for
weeks, together with her husband and
12-year-old son. ‘It feels like being in
a bad movie,’ she says. ‘The many
deaths, the empty streets, you cannot
go anywhere. It is all so surreal.’
Working from home, García-Franco
Zúñiga was doing the best she could
to help recyclers survive this difficult
time. ‘Businesses are losing millions
and millions due to the crisis. A lot of
facilities temporarily closed their