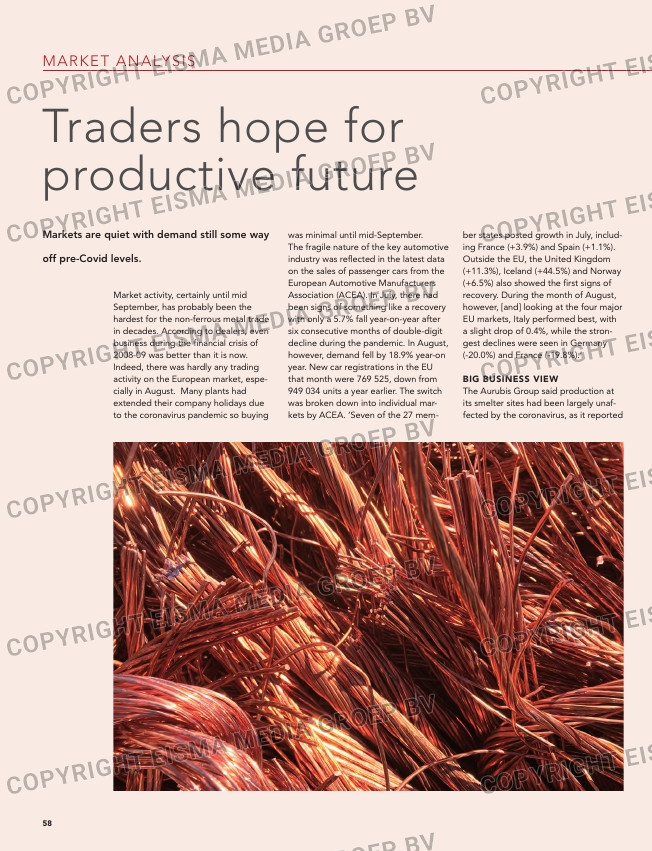 operating earnings before taxes of EUR
133 million in the first three quarters of
the current fiscal year, fractionally above
EUR 125 million for the same period the
previous year. The recycling business
was reported to have made a positive
contribution due to higher refining
charges for copper scrap and higher
throughput. ‘Aurubis has therefore
been able to compensate well for the
impacts of the coronavirus pandemic so
far during the fiscal year.’
Novelis acknowledged the effect of the
virus in its Q1 fiscal year report, also in
August. ‘While the company’s financial
results were impacted by the Covid-19
pandemic, the resiliency of the bever-
age can market provided stability and
demand trends in the automotive and
specialty markets recovered significantly
towards the end of the quarter.’

Meanwhile, Rio Tinto is preparing to
launch a new scrap take-back solution
and production of high-quality alloys
made with recycled content in the
North American market. It is partnering
with Shawinigan Aluminium for recy-
cling at a US$ 7 million (EUR 6 million)
melting facility next to Shawinigan’s
existing billet plant in Quebec. The
facility will have the capacity to recycle
30 000 tonnes of aluminium per year.
This ‘closed loop service’, which will be
available from next year, complements
the company’s commitment to low car-
bon footprint aluminium and addresses
demand for sustainable products. ‘We
have developed this after requests from
customers who want options to repro-
cess their extrusion scrap. It’s an offer-
ing that combines responsibly produced
primary aluminium and recycled metal,
demonstrating our commitment to a
more sustainable, circular economy,’
said Tolga Egrilmezer, Rio Tinto
Aluminium vice-president, sales and
marketing.
Prices on the London Metal Exchange,
perhaps perversely, rose and in some
cases the highest prices for many
months were reached. This was not
because of fundamental factors such as
supply or demand but rather specula-
tion. In times of crisis, raw materials,
especially metals, have always been
preferred as investment objects.

Market activity, certainly until mid
September, has probably been the
hardest for the non-ferrous metal trade
in decades. According to dealers, even
business during the financial crisis of
2008-09 was better than it is now.
Indeed, there was hardly any trading
activity on the European market, espe-
cially in August. Many plants had
extended their company holidays due
to the coronavirus pandemic so buying

was minimal until mid-September.
The fragile nature of the key automotive
industry was reflected in the latest data
on the sales of passenger cars from the
European Automotive Manufacturers
Association (ACEA). In July, there had
been signs of something like a recovery
with only a 5.7% fall year-on-year after
six consecutive months of double-digit
decline during the pandemic. In August,
however, demand fell by 18.9% year-on
year. New car registrations in the EU
that month were 769 525, down from
949 034 units a year earlier. The switch
was broken down into individual mar-
kets by ACEA. ‘Seven of the 27 mem-

BIG BUSINESS VIEW
The Aurubis Group said production at
its smelter sites had been largely unaf-
fected by the coronavirus, as it reported