Subscribe
ferrous 57recyclinginternational.com | November/December | 2019 month to 99.36 million tonnes. That was up from 94.85 million tonnes in August, a 4.8% increase month-on- month and a 20-month high due to solid demand and consistent ...
Read the entire page 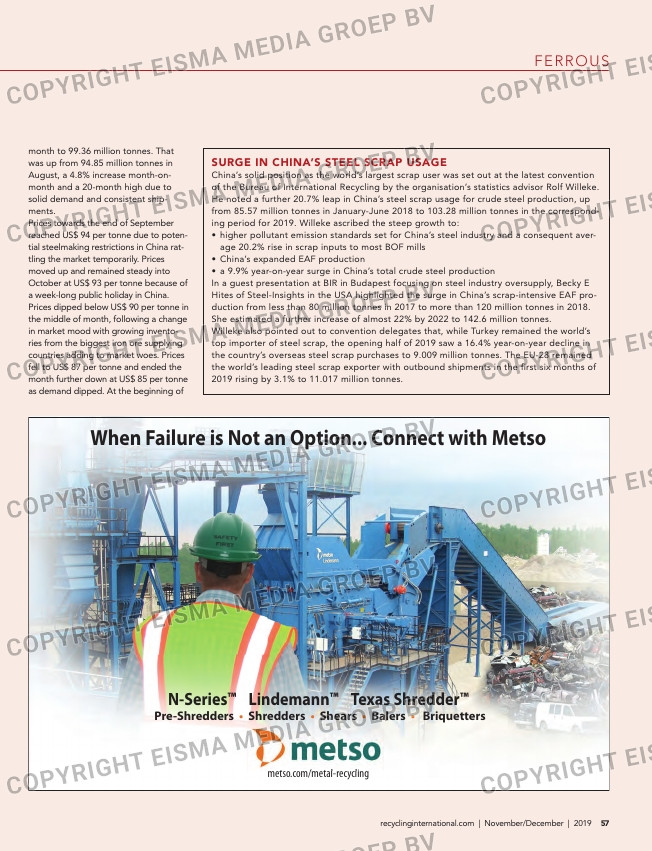 month to 99.36 million tonnes. That
was up from 94.85 million tonnes in
August, a 4.8% increase month-on-
month and a 20-month high due to
solid demand and consistent ship-
ments.
Prices towards the end of September
reached US$ 94 per tonne due to poten-
tial steelmaking restrictions in China rat-
tling the market temporarily. Prices
moved up and remained steady into
October at US$ 93 per tonne because of
a week-long public holiday in China.
Prices dipped below US$ 90 per tonne in
the middle of month, following a change
in market mood with growing invento-
ries from the biggest iron ore supplying
countries adding to market woes. Prices
fell to US$ 87 per tonne and ended the
month further down at US$ 85 per tonne
as demand dipped. At the beginning of

SurGE IN ChINA’S STEEl SCrAP uSAGE
China’s solid position as the world’s largest scrap user was set out at the latest convention
of the Bureau of International Recycling by the organisation’s statistics advisor Rolf Willeke.
He noted a further 20.7% leap in China’s steel scrap usage for crude steel production, up
from 85.57 million tonnes in January-June 2018 to 103.28 million tonnes in the correspond-
ing period for 2019. Willeke ascribed the steep growth to:
• higher pollutant emission standards set for China’s steel industry and a consequent aver-

age 20.2% rise in scrap inputs to most BOF mills
• China’s expanded EAF production
• a 9.9% year-on-year surge in China’s total crude steel production
In a guest presentation at BIR in Budapest focusing on steel industry oversupply, Becky E
Hites of Steel-Insights in the USA highlighted the surge in China’s scrap-intensive EAF pro-
duction from less than 80 million tonnes in 2017 to more than 120 million tonnes in 2018.
She estimated a further increase of almost 22% by 2022 to 142.6 million tonnes.
Willeke also pointed out to convention delegates that, while Turkey remained the world’s
top importer of steel scrap, the opening half of 2019 saw a 16.4% year-on-year decline in
the country’s overseas steel scrap purchases to 9.009 million tonnes. The EU-28 remained
the world’s leading steel scrap exporter with outbound shipments in the first six months of
2019 rising by 3.1% to 11.017 million tonnes.

When Failure is Not an Option… Connect with Metso