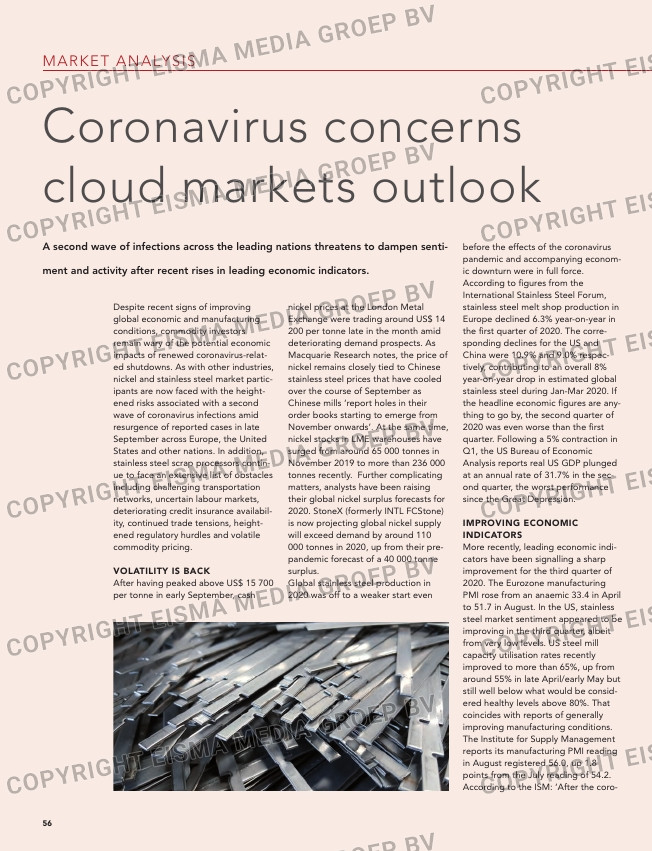 ment and activity after recent rises in leading economic indicators.

navirus (Covid-19) brought manufactur-
ing activity to historic lows, the sector
continued its recovery in August, the
first full month of operations after sup-
ply chains restarted and adjustments
were made for employees to return to
work’.

EXTREMELY POOR EXPORTS
Stainless steel and scrap prices had
been following the upward trend in
nickel prices. In the US, the Davis Index
reports prices for 330 solids increased
to around US$ 4 520 per tonne in
September, up from US$ 3 300 in May.
Rising US steel and carbon steel scrap
prices also contributed to firmer stain-
less scrap prices and improved scrap
flows in early September. But the
export market for stainless scrap has
been extremely poor this year. US
stainless scrap exports during Jan-Jul
2020 were down 28% as compared to
the corresponding period last year on
weaker demand from Taiwan, India,

before the effects of the coronavirus
pandemic and accompanying econom-
ic downturn were in full force.
According to figures from the
International Stainless Steel Forum,
stainless steel melt shop production in
Europe declined 6.3% year-on-year in
the first quarter of 2020. The corre-
sponding declines for the US and
China were 10.9% and 9.0% respec-
tively, contributing to an overall 8%
year-on-year drop in estimated global
stainless steel during Jan-Mar 2020. If
the headline economic figures are any-
thing to go by, the second quarter of
2020 was even worse than the first
quarter. Following a 5% contraction in
Q1, the US Bureau of Economic
Analysis reports real US GDP plunged
at an annual rate of 31.7% in the sec-
ond quarter, the worst performance
since the Great Depression.

IMPROVING ECONOMIC
INDICATORS
More recently, leading economic indi-
cators have been signalling a sharp
improvement for the third quarter of
2020. The Eurozone manufacturing
PMI rose from an anaemic 33.4 in April
to 51.7 in August. In the US, stainless
steel market sentiment appeared to be
improving in the third quarter, albeit
from very low levels. US steel mill
capacity utilisation rates recently
improved to more than 65%, up from
around 55% in late April/early May but
still well below what would be consid-
ered healthy levels above 80%. That
coincides with reports of generally
improving manufacturing conditions.
The Institute for Supply Management
reports its manufacturing PMI reading
in August registered 56.0, up 1.8
points from the July reading of 54.2.
According to the ISM: ‘After the coro-

VOLATILITY IS BACK
After having peaked above US$ 15 700
per tonne in early September, cash

nickel prices at the London Metal
Exchange were trading around US$ 14
200 per tonne late in the month amid
deteriorating demand prospects. As
Macquarie Research notes, the price of
nickel remains closely tied to Chinese
stainless steel prices that have cooled
over the course of September as
Chinese mills ‘report holes in their
order books starting to emerge from
November onwards’. At the same time,
nickel stocks in LME warehouses have
surged from around 65 000 tonnes in
November 2019 to more than 236 000
tonnes recently. Further complicating
matters, analysts have been raising
their global nickel surplus forecasts for
2020. StoneX (formerly INTL FCStone)
is now projecting global nickel supply
will exceed demand by around 110
000 tonnes in 2020, up from their pre-
pandemic forecast of a 40 000 tonne
surplus.
Global stainless steel production in
2020 was off to a weaker start even

Musk moving Nickel
Nickel fell in September by almost 1,000 USD/t or 6%.
The peak at 15,700 USD/t at the beginning was the reac-
tion to an Elon Musk comment, that he will need a lot of ‘clean Ni’ in the
future for TESLA batteries. After his last comments on the ‘Battery Day’ on
September 22nd, Ni fell sharply as it became clear that the shift to the new
Ni intensive batteries will take longer than expected.