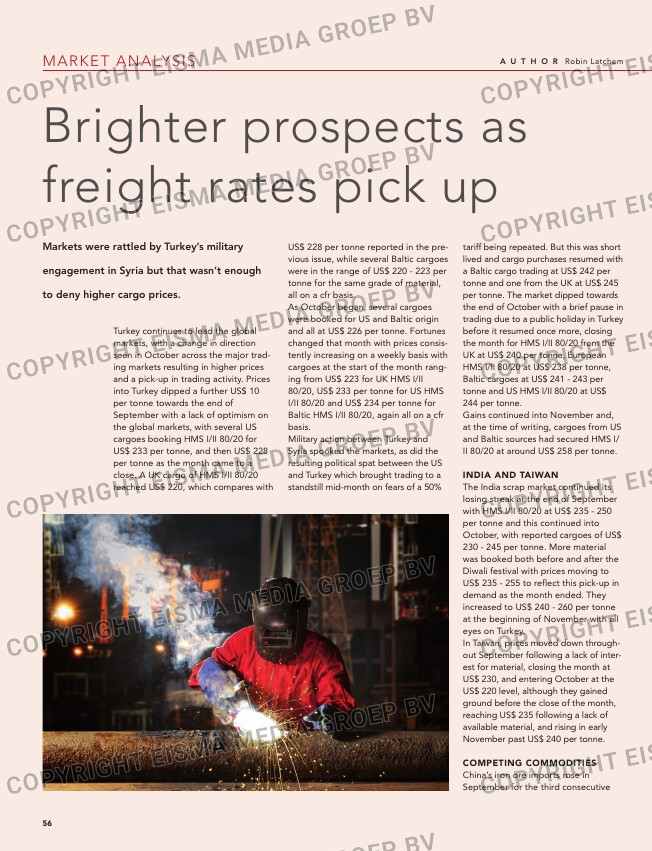 engagement in Syria but that wasn’t enough

Turkey continues to lead the global
markets, with a change in direction
seen in October across the major trad-
ing markets resulting in higher prices
and a pick-up in trading activity. Prices
into Turkey dipped a further US$ 10
per tonne towards the end of
September with a lack of optimism on
the global markets, with several US
cargoes booking HMS I/II 80/20 for
US$ 233 per tonne, and then US$ 228
per tonne as the month came to a
close. A UK cargo of HMS I/II 80/20
reached US$ 220, which compares with

US$ 228 per tonne reported in the pre-
vious issue, while several Baltic cargoes
were in the range of US$ 220 – 223 per
tonne for the same grade of material,
all on a cfr basis.
As October began, several cargoes
were booked for US and Baltic origin
and all at US$ 226 per tonne. Fortunes
changed that month with prices consis-
tently increasing on a weekly basis with
cargoes at the start of the month rang-
ing from US$ 223 for UK HMS I/II
80/20, US$ 233 per tonne for US HMS
I/II 80/20 and US$ 234 per tonne for
Baltic HMS I/II 80/20, again all on a cfr
basis.
Military action between Turkey and
Syria spooked the markets, as did the
resulting political spat between the US
and Turkey which brought trading to a
standstill mid-month on fears of a 50%

INDIA AND TAIWAN
The India scrap market continued its
losing streak at the end of September
with HMS I/II 80/20 at US$ 235 – 250
per tonne and this continued into
October, with reported cargoes of US$
230 – 245 per tonne. More material
was booked both before and after the
Diwali festival with prices moving to
US$ 235 – 255 to reflect this pick-up in
demand as the month ended. They
increased to US$ 240 – 260 per tonne
at the beginning of November with all
eyes on Turkey.
In Taiwan, prices moved down through-
out September following a lack of inter-
est for material, closing the month at
US$ 230, and entering October at the
US$ 220 level, although they gained
ground before the close of the month,
reaching US$ 235 following a lack of
available material, and rising in early
November past US$ 240 per tonne.

When Failure is Not an Option… Connect with Metso