Subscribe
ferrous 53recyclinginternational.com | September/October | 2020 the likely increased costs and opera- tional overheads. He thought they were also able to diversify, especially in volatile future. ‘If you are only feeding one mill...
Read the entire page 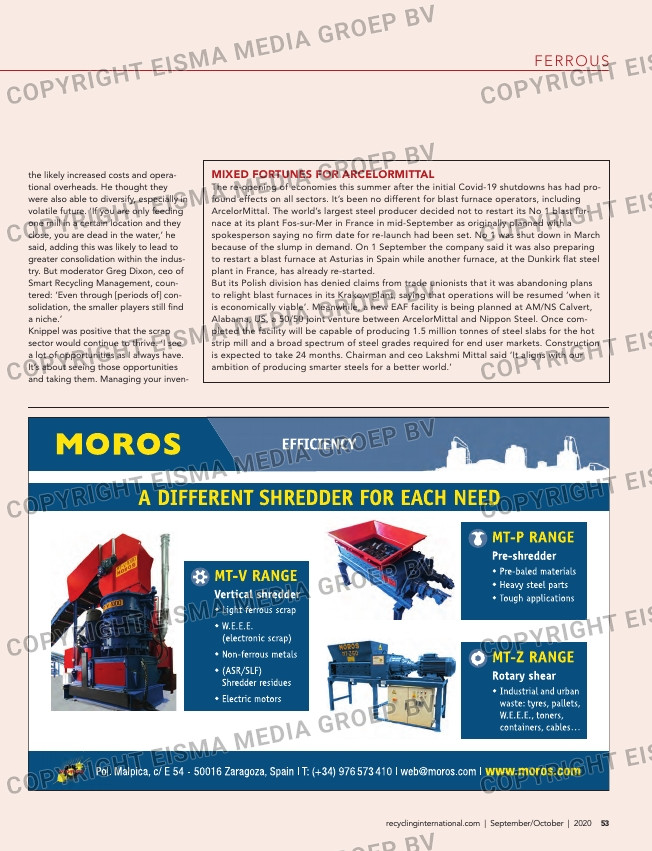 the likely increased costs and opera-
tional overheads. He thought they
were also able to diversify, especially in
volatile future. ‘If you are only feeding
one mill in a certain location and they
close, you are dead in the water,’ he
said, adding this was likely to lead to
greater consolidation within the indus-
try. But moderator Greg Dixon, ceo of
Smart Recycling Management, coun-
tered: ‘Even through [periods of] con-
solidation, the smaller players still find
a niche.’
Knippel was positive that the scrap
sector would continue to thrive. ‘I see
a lot of opportunities as I always have.
It’s about seeing those opportunities
and taking them. Managing your inven-

MIxEd foRTUNES foR ARCEloRMITTAl
The re-opening of economies this summer after the initial Covid-19 shutdowns has had pro-
found effects on all sectors. It’s been no different for blast furnace operators, including
ArcelorMittal. The world’s largest steel producer decided not to restart its No 1 blast fur-
nace at its plant Fos-sur-Mer in France in mid-September as originally planned with a
spokesperson saying no firm date for re-launch had been set. No 1 was shut down in March
because of the slump in demand. On 1 September the company said it was also preparing
to restart a blast furnace at Asturias in Spain while another furnace, at the Dunkirk flat steel
plant in France, has already re-started.
But its Polish division has denied claims from trade unionists that it was abandoning plans
to relight blast furnaces in its Krakow plant, saying that operations will be resumed ‘when it
is economically viable’. Meanwhile, a new EAF facility is being planned at AM/NS Calvert,
Alabama, US, a 50/50 joint venture between ArcelorMittal and Nippon Steel. Once com-
pleted the facility will be capable of producing 1.5 million tonnes of steel slabs for the hot
strip mill and a broad spectrum of steel grades required for end user markets. Construction
is expected to take 24 months. Chairman and ceo Lakshmi Mittal said ‘It aligns with our
ambition of producing smarter steels for a better world.’