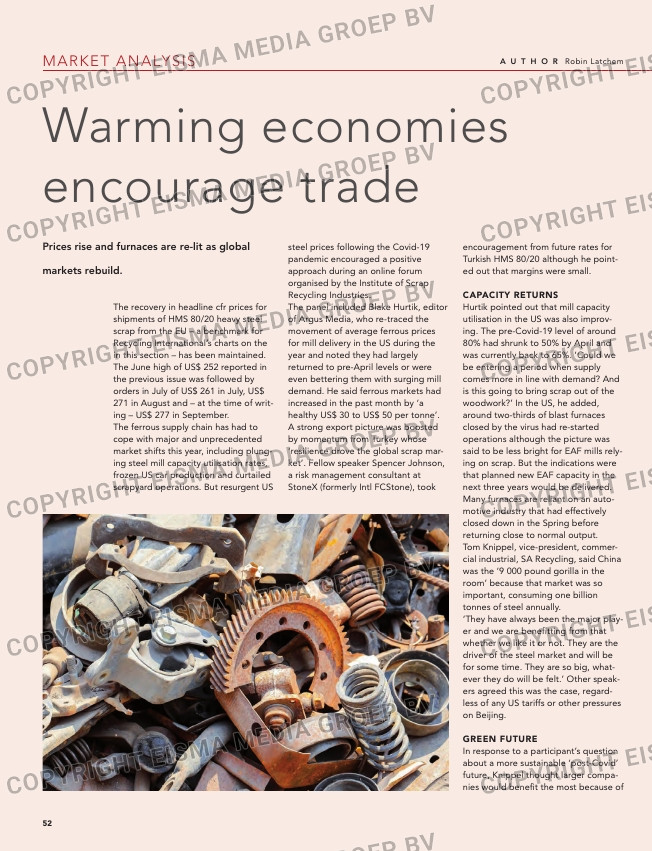 The recovery in headline cfr prices for
shipments of HMS 80/20 heavy steel
scrap from the EU – a benchmark for
Recycling International’s charts on the
in this section – has been maintained.
The June high of US$ 252 reported in
the previous issue was followed by
orders in July of US$ 261 in July, US$
271 in August and – at the time of writ-
ing – US$ 277 in September.
The ferrous supply chain has had to
cope with major and unprecedented
market shifts this year, including plung-
ing steel mill capacity utilisation rates,
frozen US car production and curtailed
scrapyard operations. But resurgent US

steel prices following the Covid-19
pandemic encouraged a positive
approach during an online forum
organised by the Institute of Scrap
Recycling Industries.
The panel included Blake Hurtik, editor
of Argus Media, who re-traced the
movement of average ferrous prices
for mill delivery in the US during the
year and noted they had largely
returned to pre-April levels or were
even bettering them with surging mill
demand. He said ferrous markets had
increased in the past month by ‘a
healthy US$ 30 to US$ 50 per tonne’.
A strong export picture was boosted
by momentum from Turkey whose
‘resilience drove the global scrap mar-
ket’. Fellow speaker Spencer Johnson,
a risk management consultant at
StoneX (formerly Intl FCStone), took

encouragement from future rates for
Turkish HMS 80/20 although he point-
ed out that margins were small.

CAPACITY RETURNS
Hurtik pointed out that mill capacity
utilisation in the US was also improv-
ing. The pre-Covid-19 level of around
80% had shrunk to 50% by April and
was currently back to 65%. ‘Could we
be entering a period when supply
comes more in line with demand? And
is this going to bring scrap out of the
woodwork?’ In the US, he added,
around two-thirds of blast furnaces
closed by the virus had re-started
operations although the picture was
said to be less bright for EAF mills rely-
ing on scrap. But the indications were
that planned new EAF capacity in the
next three years would be delivered.
Many furnaces are reliant on an auto-
motive industry that had effectively
closed down in the Spring before
returning close to normal output.
Tom Knippel, vice-president, commer-
cial industrial, SA Recycling, said China
was the ‘9 000 pound gorilla in the
room’ because that market was so
important, consuming one billion
tonnes of steel annually.
‘They have always been the major play-
er and we are benefitting from that
whether we like it or not. They are the
driver of the steel market and will be
for some time. They are so big, what-
ever they do will be felt.’ Other speak-
ers agreed this was the case, regard-
less of any US tariffs or other pressures
on Beijing.

GREEN fUTURE
In response to a participant’s question
about a more sustainable ‘post-Covid’
future, Knippel thought larger compa-
nies would benefit the most because of