Subscribe
TECHNOLOGY EXPERTS Plug-and-play for higher purity Separating transformers, electric motors, but also small fractions of copper wire from ferrous scrap streams is a piece of cake for the TA-PO 1000, a solution developed by Dutchm...
Read the entire page 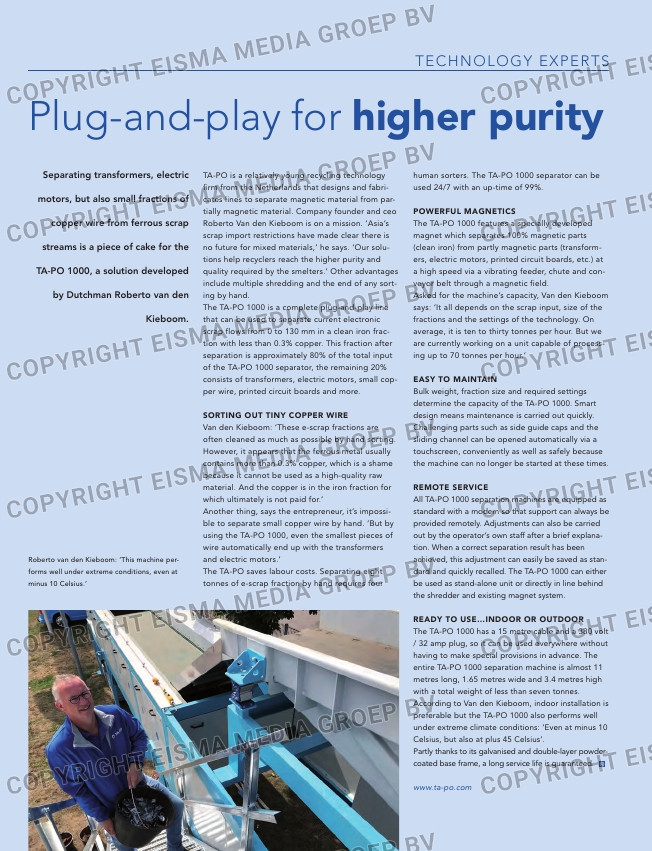 motors, but also small fractions of

streams is a piece of cake for the

firm from the Netherlands that designs and fabri-

Roberto Van den Kieboom is on a mission. ‘Asia’s

scrap import restrictions have made clear there is

no future for mixed materials,’ he says. ‘Our solu-

quality required by the smelters.’ Other advantages

include multiple shredding and the end of any sort-

The TA-PO 1000 is a complete plug-and-play line

that can be used to separate current electronic

tion with less than 0.3% copper. This fraction after

separation is approximately 80% of the total input

often cleaned as much as possible by hand sorting.

However, it appears that the ferrous metal usually

contains more than 0.3% copper, which is a shame

because it cannot be used as a high-quality raw

material. And the copper is in the iron fraction for

which ultimately is not paid for.’

ble to separate small copper wire by hand. ‘But by

using the TA-PO 1000, even the smallest pieces of

wire automatically end up with the transformers

human sorters. The TA-PO 1000 separator can be

a high speed via a vibrating feeder, chute and con-

veyor belt through a magnetic field.

says: ‘It all depends on the scrap input, size of the

fractions and the settings of the technology. On

average, it is ten to thirty tonnes per hour. But we

are currently working on a unit capable of process-

determine the capacity of the TA-PO 1000. Smart

Challenging parts such as side guide caps and the

sliding channel can be opened automatically via a

touchscreen, conveniently as well as safely because

the machine can no longer be started at these times.

remote Service
All TA-PO 1000 separation machines are equipped as

standard with a modem so that support can always be

out by the operator’s own staff after a brief explana-

tion. When a correct separation result has been

achieved, this adjustment can easily be saved as stan-

dard and quickly recalled. The TA-PO 1000 can either

be used as stand-alone unit or directly in line behind

the shredder and existing magnet system.

/ 32 amp plug, so it can be used everywhere without

having to make special provisions in advance. The

with a total weight of less than seven tonnes.

According to Van den Kieboom, indoor installation is

under extreme climate conditions: ‘Even at minus 10

Celsius, but also at plus 45 Celsius’.

Partly thanks to its galvanised and double-layer powder-

coated base frame, a long service life is guaranteed.

forms well under extreme conditions, even at