Subscribe
PLASTICS Advanced line to handle half of Denmark’s PET bottles Recycling technology provider Stadler has completed the commissioning of a beverage packaging sorting plant it designed and built for Dansk Retursystem in Taastru...
Read the entire page 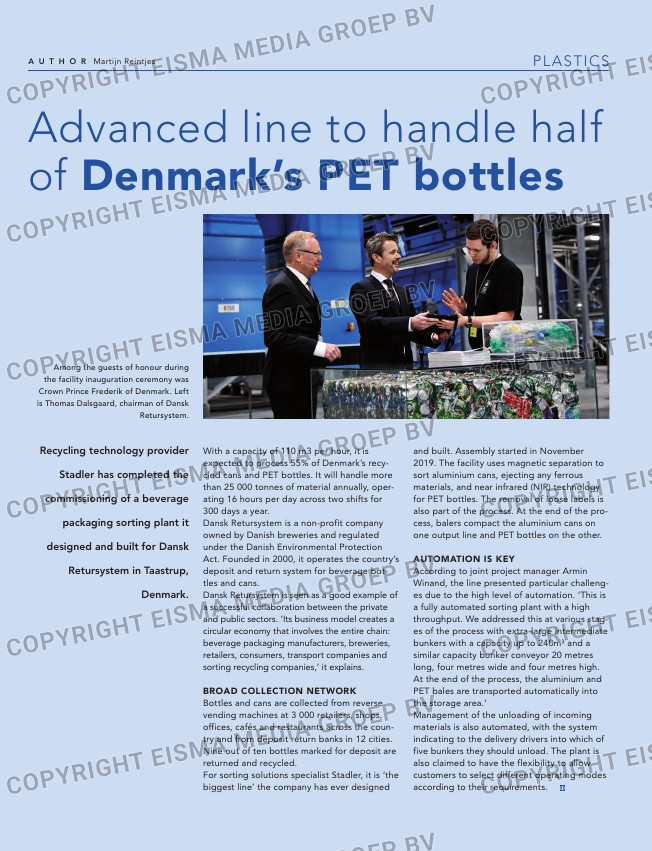 Advanced line to handle half
of Denmark’s PET bottles

Stadler has completed the

commissioning of a beverage

designed and built for Dansk

With a capacity of 110 m3 per hour, it is
expected to process 55% of Denmark’s recy-
cled cans and PET bottles. It will handle more
than 25 000 tonnes of material annually, oper-
ating 16 hours per day across two shifts for
300 days a year.
Dansk Retursystem is a non-profit company
owned by Danish breweries and regulated
under the Danish Environmental Protection
Act. Founded in 2000, it operates the country’s
deposit and return system for beverage bot-
tles and cans.
Dansk Retursystem is seen as a good example of
a successful collaboration between the private
and public sectors. ‘Its business model creates a
circular economy that involves the entire chain:
beverage packaging manufacturers, breweries,
retailers, consumers, transport companies and
sorting recycling companies,’ it explains.

BROAD COLLECTION NETWORK
Bottles and cans are collected from reverse
vending machines at 3 000 retailers, shops,
offices, cafés and restaurants across the coun-
try and from deposit return banks in 12 cities.
Nine out of ten bottles marked for deposit are
returned and recycled.
For sorting solutions specialist Stadler, it is ‘the
biggest line’ the company has ever designed

and built. Assembly started in November
2019. The facility uses magnetic separation to
sort aluminium cans, ejecting any ferrous
materials, and near infrared (NIR) technology
for PET bottles. The removal of loose labels is
also part of the process. At the end of the pro-
cess, balers compact the aluminium cans on
one output line and PET bottles on the other.

AUTOMATION IS KEY
According to joint project manager Armin
Winand, the line presented particular challeng-
es due to the high level of automation. ‘This is
a fully automated sorting plant with a high
throughput. We addressed this at various stag-
es of the process with extra-large intermediate
bunkers with a capacity up to 240m³ and a
similar capacity bunker conveyor 20 metres
long, four metres wide and four metres high.
At the end of the process, the aluminium and
PET bales are transported automatically into
the storage area.’
Management of the unloading of incoming
materials is also automated, with the system
indicating to the delivery drivers into which of
five bunkers they should unload. The plant is
also claimed to have the flexibility to allow
customers to select different operating modes
according to their requirements.

Among the guests of honour during
the facility inauguration ceremony was