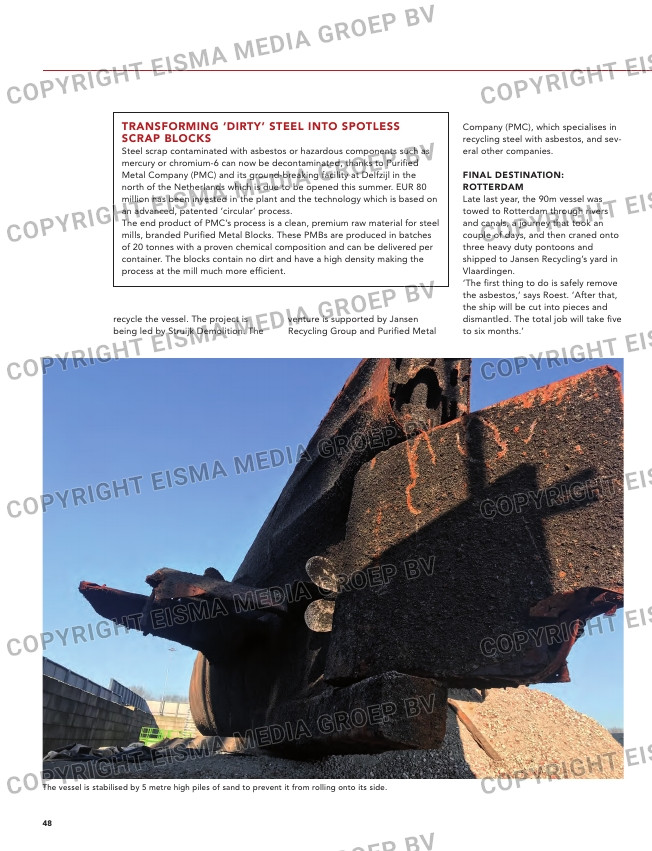 traNSformiNG ‘dirty’ Steel iNto SpotleSS
Scrap BlocKS
Steel scrap contaminated with asbestos or hazardous components such as
mercury or chromium-6 can now be decontaminated, thanks to Purified
Metal Company (PMC) and its ground-breaking facility at Delfzijl in the
north of the Netherlands which is due to be opened this summer. EUR 80
million has been invested in the plant and the technology which is based on
an advanced, patented ‘circular’ process.
The end product of PMC’s process is a clean, premium raw material for steel
mills, branded Purified Metal Blocks. These PMBs are produced in batches
of 20 tonnes with a proven chemical composition and can be delivered per
container. The blocks contain no dirt and have a high density making the
process at the mill much more efficient.

The vessel is stabilised by 5 metre high piles of sand to prevent it from rolling onto its side.

recycle the vessel. The project is
being led by Struijk Demolition. The

An electronic engineer by education,
the operational director has been
inside the submarine a couple of
times. ‘For me it’s like entering a
candy store. Especially the torpedo
room with the wiring, control buttons
and panels.’ What surprised him were
the narrow spaces in the vessel.
‘Imagine what living and working on
board must have been for the 70 crew
members stuck in the vessel, some-
times for weeks or even months deep
under the ocean surface. You’d get
claustrophobic.’

from old to NeW Scrap
Chromium-6 and asbestos-containing
steel removed from the Foxtrot is pre-
pared for transport to PMC in Delfzijl
in the north of the Netherlands, where
it will be cleaned in the company’s
specialised facility. During this process
(see box), the asbestos disintegrates
into harmless components, while the
chromium-6 is removed. As Roest
explains, ‘The steel is then sent to
steel mills so that the cleaned scrap
can be used again in steel production.
That means that a piece of ferrous
from Foxtrot may soon find a second
life as, for example, a traffic sign.’
Foxtrot B-80 is the first major demoli-
tion project in which contaminated
scrap will be processed in PMC’s own
facility. Claimed to be the first of its
kind worldwide, the facility is expect-
ed to be operational by July or
August.

venture is supported by Jansen
Recycling Group and Purified Metal

Company (PMC), which specialises in
recycling steel with asbestos, and sev-
eral other companies.

fiNal deStiNatioN:
rotterdam
Late last year, the 90m vessel was
towed to Rotterdam through rivers
and canals, a journey that took an
couple of days, and then craned onto
three heavy duty pontoons and
shipped to Jansen Recycling’s yard in
Vlaardingen.
‘The first thing to do is safely remove
the asbestos,’ says Roest. ‘After that,
the ship will be cut into pieces and
dismantled. The total job will take five
to six months.’