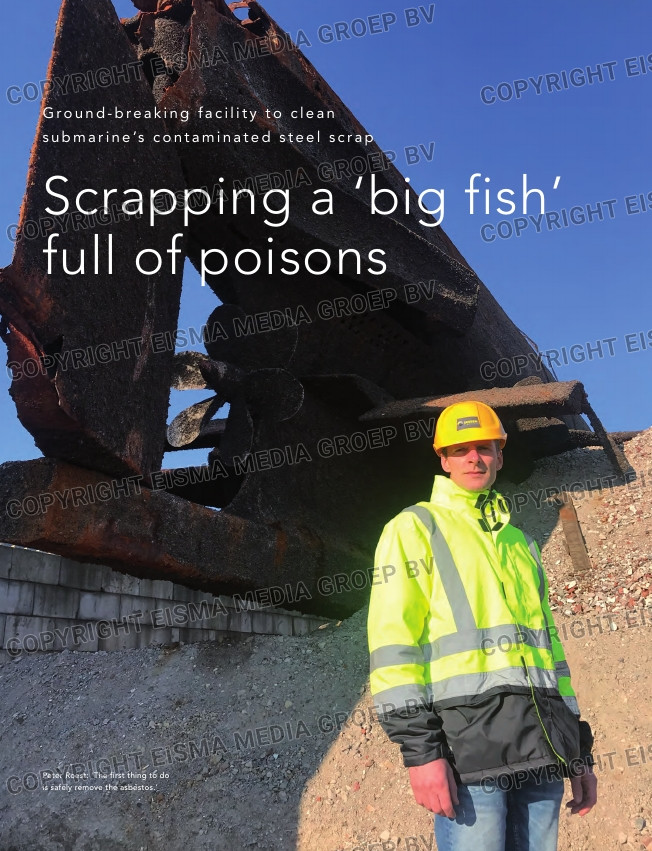 is now being dismantled at Jansen Recycling Group’s yard in the Port of Rotterdam. Not

an easy task, as the 90m vessel contains asbestos and chromium-6, a cancer-causing

chemical. Contaminated steel scrap will be cleaned at a new EUR 80 million specialised

smelter in the north of the country which is expected to be operational this summer.

‘Trust me, that’s a lot of scrap laying
there,’ says Jansen Recycling’s direc-
tor of operations Peter Roest with
pride as he points at the rusty colos-
sus parked at the far end of a wide
quayside platform at Vlaardingen in
Rotterdam. ‘This submarine weighs
1 800 tonnes of which 300 is just the
batteries. The rest is mainly steel but
there’s also copper, nickel – you name
it.’
Stabilised by 5 metre high piles of
sand to prevent it from rolling onto its
side, the vessel is surrounded by a
secured fence: visitors to Jansen
Recycling’s ship and offshore installa-
tions dismantling facility get only a
glimpse from the outside of the

Well-equipped for heavy duty
Foxtrot B-80 is certainly not the Jansen Recycling Group’s first mega-job.
Thanks to its location alongside the Port of Rotterdam, the company has
wide experience in dismantling off-shore and on-shore structures such as oil
platforms and ships as well as windmills and railway bridges.
In 2013, the company caught a ‘big fish’ when it was commissioned to dis-
mantle and scrap the 140m Baltic Ace, a vessel that had leapt to interna-
tional prominence the year before when it sank in the North Sea en route
from Zeebrugge in Belgium to Kotka in Finland while carrying a load of 1
400 new cars.
Dismantling structures of this type requires a special approach in terms of
both logistics and equipment, such as cranes for unloading ships. Jansen’s
36 500 m2 Vlaardingen facility has it all: the yard boasts a 200m quay with
an open connection to the North Sea as well as a scrap shear with 1 000
tonnes of cutting force. The facility also specialises in the dismantling and
demolition of large items such as sea containers.
Becoming a specialist scrap recycler was a strategic decision made by
Jansen Recycling some years ago. The company wanted to step away from
an industry where everybody is chasing scrap. ‘More and more, we have
developed into a solutions provider rather a straightforward scrap mover,’
explains Jansen Recycling’s operational director Peter Roest.

Peter Roest: ‘The first thing to do
is safely remove the asbestos.’