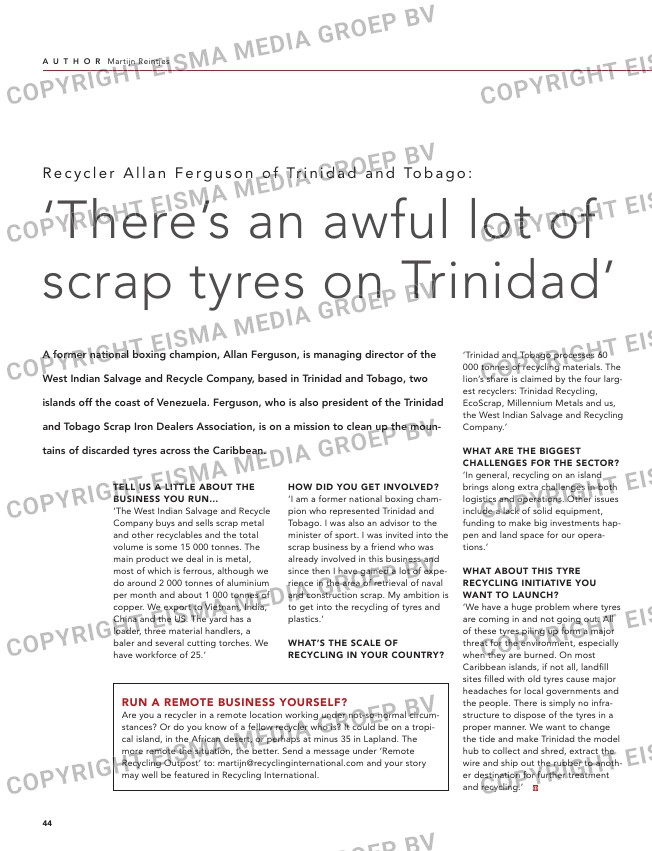 ‘There’s an awful lot of
scrap tyres on Trinidad’

A former national boxing champion, Allan Ferguson, is managing director of the

West Indian Salvage and Recycle Company, based in Trinidad and Tobago, two

islands off the coast of Venezuela. Ferguson, who is also president of the Trinidad

and Tobago Scrap Iron Dealers Association, is on a mission to clean up the moun-

tains of discarded tyres across the Caribbean.

Tell us a liTTle abouT The
business you run…
‘The West Indian Salvage and Recycle
Company buys and sells scrap metal
and other recyclables and the total
volume is some 15 000 tonnes. The
main product we deal in is metal,
most of which is ferrous, although we
do around 2 000 tonnes of aluminium
per month and about 1 000 tonnes of
copper. We export to Vietnam, India,
China and the US. The yard has a
loader, three material handlers, a
baler and several cutting torches. We
have workforce of 25.’

how did you geT involved?
‘I am a former national boxing cham-
pion who represented Trinidad and
Tobago. I was also an advisor to the
minister of sport. I was invited into the
scrap business by a friend who was
already involved in this business and
since then I have gained a lot of expe-
rience in the area of retrieval of naval
and construction scrap. My ambition is
to get into the recycling of tyres and
plastics.’

whaT’s The scale of
recycling in your counTry?

‘Trinidad and Tobago processes 60
000 tonnes of recycling materials. The
lion’s share is claimed by the four larg-
est recyclers: Trinidad Recycling,
EcoScrap, Millennium Metals and us,
the West Indian Salvage and Recycling
Company.’

whaT are The biggesT
challenges for The secTor?
‘In general, recycling on an island
brings along extra challenges in both
logistics and operations. Other issues
include a lack of solid equipment,
funding to make big investments hap-
pen and land space for our opera-
tions.’

whaT abouT This Tyre
recycling iniTiaTive you
wanT To launch?
‘We have a huge problem where tyres
are coming in and not going out. All
of these tyres piling up form a major
threat for the environment, especially
when they are burned. On most
Caribbean islands, if not all, landfill
sites filled with old tyres cause major
headaches for local governments and
the people. There is simply no infra-
structure to dispose of the tyres in a
proper manner. We want to change
the tide and make Trinidad the model
hub to collect and shred, extract the
wire and ship out the rubber to anoth-
er destination for further treatment
and recycling.’

run a remoTe business yourself?
Are you a recycler in a remote location working under not-so-normal circum-
stances? Or do you know of a fellow recycler who is? It could be on a tropi-
cal island, in the African desert, or perhaps at minus 35 in Lapland. The
more remote the situation, the better. Send a message under ‘Remote
Recycling Outpost’ to: [email protected] and your story
may well be featured in Recycling International.