Subscribe
44 Recycling. What else? At first glance, the purple bicycle on the grass next to a young woman looks per- fectly ordinary. In fact, the lightweight vehicle frame is made from 100% recycled aluminium coffee capsules. What’s the story ...
Read the entire page 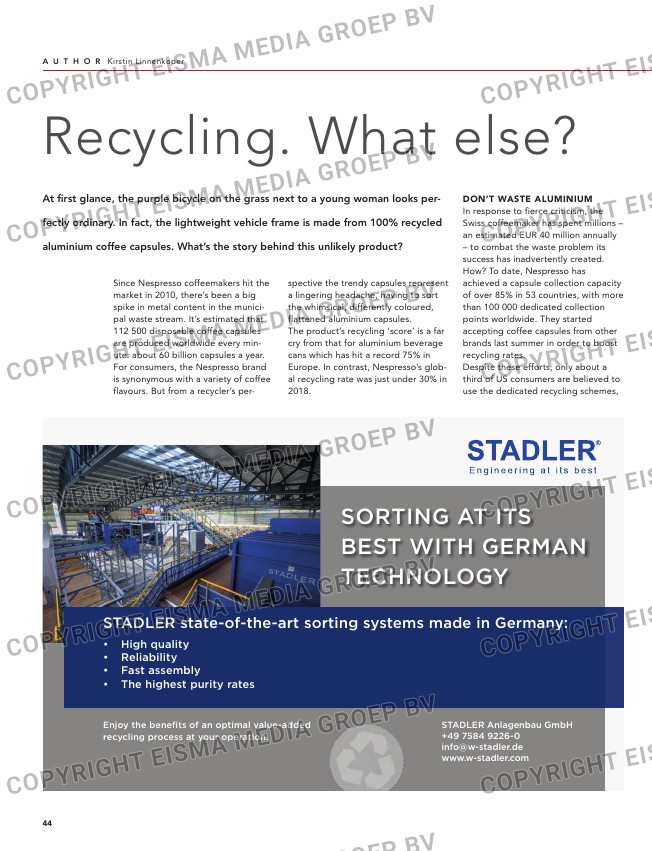 Recycling. What else?
At first glance, the purple bicycle on the grass next to a young woman looks per-

fectly ordinary. In fact, the lightweight vehicle frame is made from 100% recycled

aluminium coffee capsules. What’s the story behind this unlikely product?

laments Guillaume Le Cunff, ceo of
Nespresso USA. At the close of 2019,
he invested EUR 1 million in enhanc-
ing New York City’s recycling infra-
structure, including kerbside collec-
tion services at hotspots. This new
partnership with the city authorities
and Sims Municipal Recycling ‘has the
potential to reduce the 40 000 tonnes
of mixed metals – on top of our coffee
capsules – that currently end up in
local landfills each year’.
The recovered aluminium goes to
smelters to enable the production of
automotive parts, pens, knives or bev-
erage cans. And the list is still growing.

Riding a Re:CyCle
Eager to showcase creative possibili-
ties for recycled coffee capsules,
Nespresso came up with a new ‘state-
ment piece’, the limited edition city
bike. ‘It takes exactly 300 coffee cap-
sules to create the frame of the

Since Nespresso coffeemakers hit the
market in 2010, there’s been a big
spike in metal content in the munici-
pal waste stream. It’s estimated that
112 500 disposable coffee capsules
are produced worldwide every min-
ute: about 60 billion capsules a year.
For consumers, the Nespresso brand
is synonymous with a variety of coffee
flavours. But from a recycler’s per-

spective the trendy capsules represent
a lingering headache, having to sort
the whimsical, differently coloured,
flattened aluminium capsules.
The product’s recycling ‘score’ is a far
cry from that for aluminium beverage
cans which has hit a record 75% in
Europe. In contrast, Nespresso’s glob-
al recycling rate was just under 30% in
2018.

don’t waste aluminium
In response to fierce criticism, the
Swiss coffeemaker has spent millions –
an estimated EUR 40 million annually
– to combat the waste problem its
success has inadvertently created.
How? To date, Nespresso has
achieved a capsule collection capacity
of over 85% in 53 countries, with more
than 100 000 dedicated collection
points worldwide. They started
accepting coffee capsules from other
brands last summer in order to boost
recycling rates.
Despite these efforts, only about a
third of US consumers are believed to
use the dedicated recycling schemes,

Enjoy the benefits of an optimal value-added
recycling process at your operation.

SORTING AT ITS
BEST WITH GERMAN
TECHNOLOGY