Subscribe
BUSINESS 39recyclinginternational.com | November/December | 2019 reviewed a total of 5 904 insurance claims for metal theft between 1 January 2017 and 31 December 2018. They point out that 95% involved cop- per theft. Top 5 ThefT ...
Read the entire page 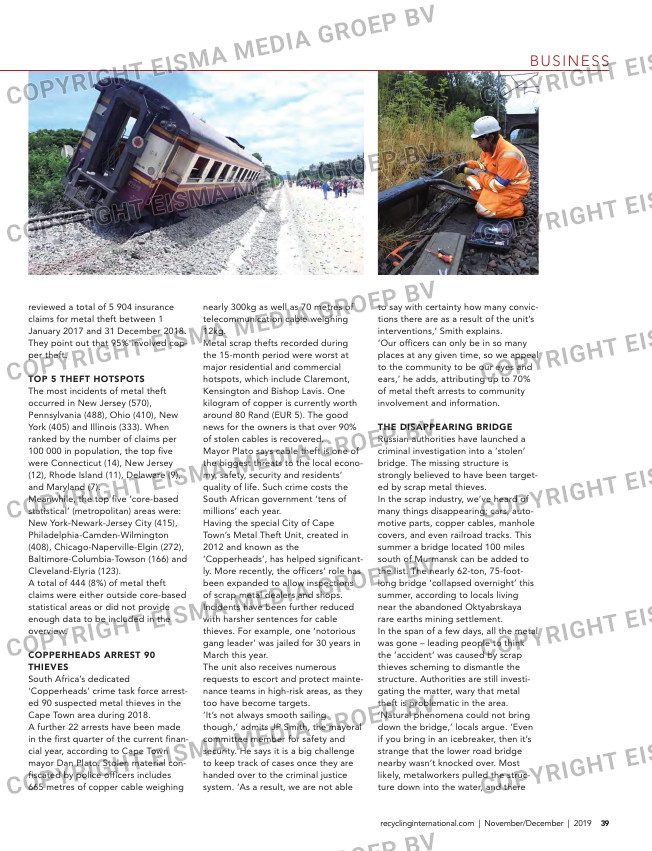 nearly 300kg as well as 70 metres of
telecommunication cable weighing
12kg.
Metal scrap thefts recorded during
the 15-month period were worst at
major residential and commercial
hotspots, which include Claremont,
Kensington and Bishop Lavis. One
kilogram of copper is currently worth
around 80 Rand (EUR 5). The good
news for the owners is that over 90%
of stolen cables is recovered.
Mayor Plato says cable theft is one of
the biggest threats to the local econo-
my, safety, security and residents’
quality of life. Such crime costs the
South African government ‘tens of
millions’ each year.
Having the special City of Cape
Town’s Metal Theft Unit, created in
2012 and known as the
‘Copperheads’, has helped significant-
ly. More recently, the officers’ role has
been expanded to allow inspections
of scrap metal dealers and shops.
Incidents have been further reduced
with harsher sentences for cable
thieves. For example, one ‘notorious
gang leader’ was jailed for 30 years in
March this year.
The unit also receives numerous
requests to escort and protect mainte-
nance teams in high-risk areas, as they
too have become targets.
‘It’s not always smooth sailing
though,’ admits JP Smith, the mayoral
committee member for safety and
security. He says it is a big challenge
to keep track of cases once they are
handed over to the criminal justice
system. ‘As a result, we are not able

to say with certainty how many convic-
tions there are as a result of the unit’s
interventions,’ Smith explains.
‘Our officers can only be in so many
places at any given time, so we appeal
to the community to be our eyes and
ears,’ he adds, attributing up to 70%
of metal theft arrests to community
involvement and information.

The disappearing bridge
Russian authorities have launched a
criminal investigation into a ‘stolen’
bridge. The missing structure is
strongly believed to have been target-
ed by scrap metal thieves.
In the scrap industry, we’ve heard of
many things disappearing; cars, auto-
motive parts, copper cables, manhole
covers, and even railroad tracks. This
summer a bridge located 100 miles
south of Murmansk can be added to
the list. The nearly 62-ton, 75-foot-
long bridge ‘collapsed overnight’ this
summer, according to locals living
near the abandoned Oktyabrskaya
rare earths mining settlement.
In the span of a few days, all the metal
was gone – leading people to think
the ‘accident’ was caused by scrap
thieves scheming to dismantle the
structure. Authorities are still investi-
gating the matter, wary that metal
theft is problematic in the area.
‘Natural phenomena could not bring
down the bridge,’ locals argue. ‘Even
if you bring in an icebreaker, then it’s
strange that the lower road bridge
nearby wasn’t knocked over. Most
likely, metalworkers pulled the struc-
ture down into the water, and there