Subscribe
PLASTICS 37recyclinginternational.com | November/December | 2019 When Slat’s U-shaped, floating arm was being tested in the middle of the Great Pacific Garbage Patch (the world’s largest accumulation of ocean plastics), the 60...
Read the entire page 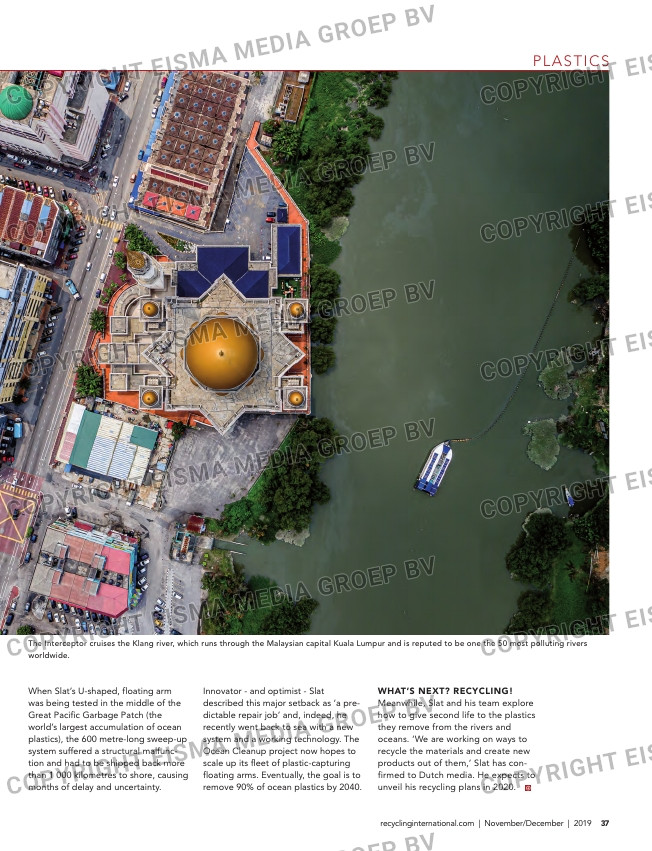 When Slat’s U-shaped, floating arm
was being tested in the middle of the
Great Pacific Garbage Patch (the
world’s largest accumulation of ocean
plastics), the 600 metre-long sweep-up
system suffered a structural malfunc-
tion and had to be shipped back more
than 1 000 kilometres to shore, causing
months of delay and uncertainty.

Innovator – and optimist – Slat
described this major setback as ‘a pre-
dictable repair job’ and, indeed, he
recently went back to sea with a new
system and a working technology. The
Ocean Cleanup project now hopes to
scale up its fleet of plastic-capturing
floating arms. Eventually, the goal is to
remove 90% of ocean plastics by 2040.

WHAT’S NEXT? RECYCLING!
Meanwhile, Slat and his team explore
how to give second life to the plastics
they remove from the rivers and
oceans. ‘We are working on ways to
recycle the materials and create new
products out of them,’ Slat has con-
firmed to Dutch media. He expects to
unveil his recycling plans in 2020.

The Interceptor cruises the Klang river, which runs through the Malaysian capital Kuala Lumpur and is reputed to be one the 50 most polluting rivers
worldwide.