Subscribe
a u t h o r Martijn Reintjes 36 Floating ‘refuse truck’ to rid plastics in key rivers the ocean Cleanup, which has pioneered innovative technologies to clear the world’s oceans of plastic, has launched a floating system to...
Read the entire page 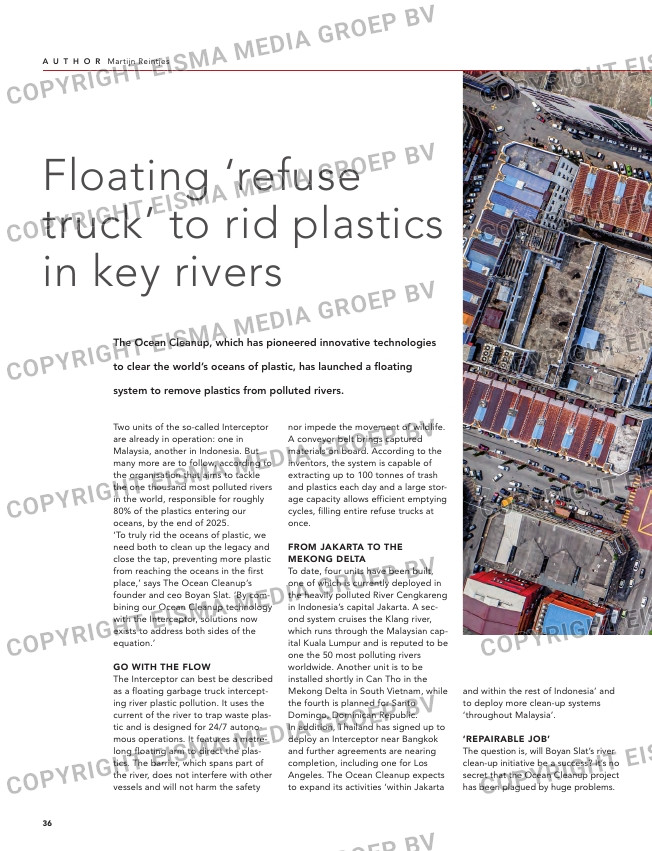 the ocean Cleanup, which has pioneered innovative technologies

to clear the world’s oceans of plastic, has launched a floating

When Slat’s U-shaped, floating arm
was being tested in the middle of the
Great Pacific Garbage Patch (the
world’s largest accumulation of ocean
plastics), the 600 metre-long sweep-up
system suffered a structural malfunc-
tion and had to be shipped back more
than 1 000 kilometres to shore, causing
months of delay and uncertainty.

Two units of the so-called Interceptor
are already in operation: one in
Malaysia, another in Indonesia. But
many more are to follow, according to
the organisation that aims to tackle
the one thousand most polluted rivers
in the world, responsible for roughly
80% of the plastics entering our
oceans, by the end of 2025.
‘To truly rid the oceans of plastic, we
need both to clean up the legacy and
close the tap, preventing more plastic
from reaching the oceans in the first
place,’ says The Ocean Cleanup’s
founder and ceo Boyan Slat. ‘By com-
bining our Ocean Cleanup technology
with the Interceptor, solutions now
exists to address both sides of the
equation.’

GO WITH THE FLOW
The Interceptor can best be described
as a floating garbage truck intercept-
ing river plastic pollution. It uses the
current of the river to trap waste plas-
tic and is designed for 24/7 autono-
mous operations. It features a metre-
long floating arm to direct the plas-
tics. The barrier, which spans part of
the river, does not interfere with other
vessels and will not harm the safety

nor impede the movement of wildlife.
A conveyor belt brings captured
materials on board. According to the
inventors, the system is capable of
extracting up to 100 tonnes of trash
and plastics each day and a large stor-
age capacity allows efficient emptying
cycles, filling entire refuse trucks at
once.

FROM JAKARTA TO THE
MEKONG DELTA
To date, four units have been built,
one of which is currently deployed in
the heavily polluted River Cengkareng
in Indonesia’s capital Jakarta. A sec-
ond system cruises the Klang river,
which runs through the Malaysian cap-
ital Kuala Lumpur and is reputed to be
one the 50 most polluting rivers
worldwide. Another unit is to be
installed shortly in Can Tho in the
Mekong Delta in South Vietnam, while
the fourth is planned for Santo
Domingo, Dominican Republic.
In addition, Thailand has signed up to
deploy an Interceptor near Bangkok
and further agreements are nearing
completion, including one for Los
Angeles. The Ocean Cleanup expects
to expand its activities ‘within Jakarta

and within the rest of Indonesia’ and
to deploy more clean-up systems
‘throughout Malaysia’.

‘REPAIRABLE JOB’
The question is, will Boyan Slat’s river
clean-up initiative be a success? It’s no
secret that the Ocean Cleanup project
has been plagued by huge problems.

The Interceptor cruises the Klang river, which runs through the Malaysian capital Kuala Lumpur and is reputed to be one the 50 most polluting rivers
worldwide.