Subscribe
36 ‘The demand was there: no-one was meeting it’ A chance conversation and cash injection kicked off the WasteAid charity that is now helping communities across Africa recycle waste into wealth. Five years on, founder Mike Webster...
Read the entire page 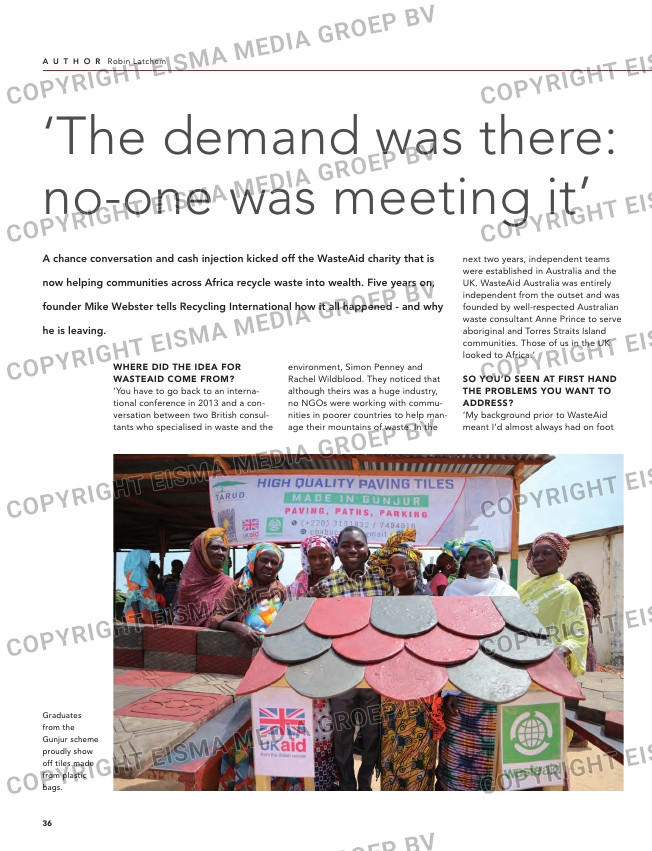 ‘The demand was there:
no-one was meeting it’
A chance conversation and cash injection kicked off the WasteAid charity that is

in waste management and recycling
and one in international development.
I’d seen how it was done over here in
the west and was determined to tack-
le the consequences of minimal – or
worse – waste management in devel-
oping countries. And it’s an important
tool in tackling major killers such as
cholera and malaria.’

How did it get going –
and wHat was tHe biggest
cHallenge?
‘When you start any venture in the
non-profit sector, just getting going is
the hardest task. No-one knows you,
you have zero credibility and trying to
get funding is like pushing water
uphill. It was the UK’s annual RWM
recycling and waste management
show that gave us the leg-up. In 2014,
its steering committee decided to
give us £15,000 towards the legal and
regulatory costs any charity faces at
the outset. They really put their faith
in us because what they were doing,
in effect, was paying lawyers.’

wHicH project most
illustrates your success?
‘We’ve done quite a lot of work in The
Gambia – in fact we were encouraged
to bid for EU funding on a project
there when we were still waiting to be
formally registered as a charity. That
showed us the demand was there for
something like WasteAid. Volunteers
went into the local communities to
show how waste really can mean
wealth. Plastic bags and similar mate-
rials are recycled into attractive paving
tiles which have genuine value and
generate revenue for the community.
A principal task is to share our experi-
ence and we’re great believers in
‘training the trainers’. Just last year,
one group in the town of Gunjur was
confident enough to set up their own
company to market these products
and build a larger recycling centre to
scale up their operations.’

wHat else Has wasteaid
done?
‘In Kenya, for example, we’ve sup-
ported local people to separate their
waste into different streams. They

wHere did tHe idea for
wasteaid come from?
‘You have to go back to an interna-
tional conference in 2013 and a con-
versation between two British consul-
tants who specialised in waste and the

environment, Simon Penney and
Rachel Wildblood. They noticed that
although theirs was a huge industry,
no NGOs were working with commu-
nities in poorer countries to help man-
age their mountains of waste. In the

next two years, independent teams
were established in Australia and the
UK. WasteAid Australia was entirely
independent from the outset and was
founded by well-respected Australian
waste consultant Anne Prince to serve
aboriginal and Torres Straits Island
communities. Those of us in the UK
looked to Africa.’

so you’d seen at first Hand
tHe problems you want to
address?
‘My background prior to WasteAid
meant I’d almost always had on foot

Graduates
from the
Gunjur scheme
proudly show
off tiles made
from plastic
bags.