Subscribe
NICHE 35recyclinginternational.com | September/October | 2020 thetic sports fields or can be used, as an example, for drainage. Cleaned rubber granules typically find their way into industry with RTA being ‘well-suited’ for a...
Read the entire page 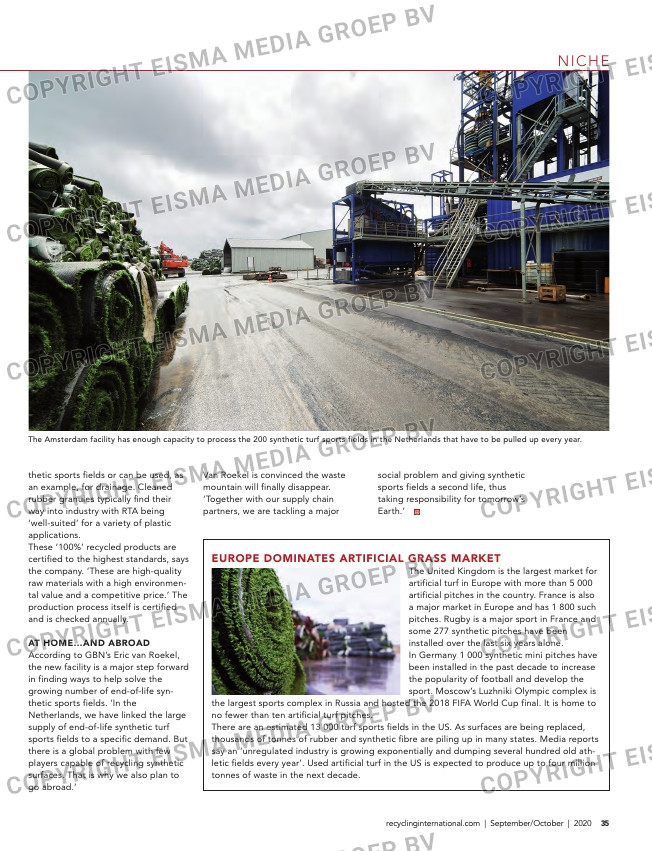 thetic sports fields or can be used, as
an example, for drainage. Cleaned
rubber granules typically find their
way into industry with RTA being
‘well-suited’ for a variety of plastic
applications.
These ‘100%’ recycled products are
certified to the highest standards, says
the company. ‘These are high-quality
raw materials with a high environmen-
tal value and a competitive price.’ The
production process itself is certified
and is checked annually.

At home…And AbroAd
According to GBN’s Eric van Roekel,
the new facility is a major step forward
in finding ways to help solve the
growing number of end-of-life syn-
thetic sports fields. ‘In the
Netherlands, we have linked the large
supply of end-of-life synthetic turf
sports fields to a specific demand. But
there is a global problem with few
players capable of recycling synthetic
surfaces. That is why we also plan to
go abroad.’

Van Roekel is convinced the waste
mountain will finally disappear.
‘Together with our supply chain
partners, we are tackling a major

europe dominAtes ArtificiAl grAss mArket
The United Kingdom is the largest market for
artificial turf in Europe with more than 5 000
artificial pitches in the country. France is also
a major market in Europe and has 1 800 such
pitches. Rugby is a major sport in France and
some 277 synthetic pitches have been
installed over the last six years alone.
In Germany 1 000 synthetic mini pitches have
been installed in the past decade to increase
the popularity of football and develop the
sport. Moscow’s Luzhniki Olympic complex is

the largest sports complex in Russia and hosted the 2018 FIFA World Cup final. It is home to
no fewer than ten artificial turf pitches.
There are an estimated 13 000 turf sports fields in the US. As surfaces are being replaced,
thousands of tonnes of rubber and synthetic fibre are piling up in many states. Media reports
say an ‘unregulated industry is growing exponentially and dumping several hundred old ath-
letic fields every year’. Used artificial turf in the US is expected to produce up to four million
tonnes of waste in the next decade.

The Amsterdam facility has enough capacity to process the 200 synthetic turf sports fields in the Netherlands that have to be pulled up every year.