Subscribe
PLASTICS 31recyclinginternational.com | November/December | 2019 has attracted a large group of visitors on a rainy October day. Lindner’s novel shredder is equipped with a direct belt drive that enables rotor speeds of over 300 ...
Read the entire page 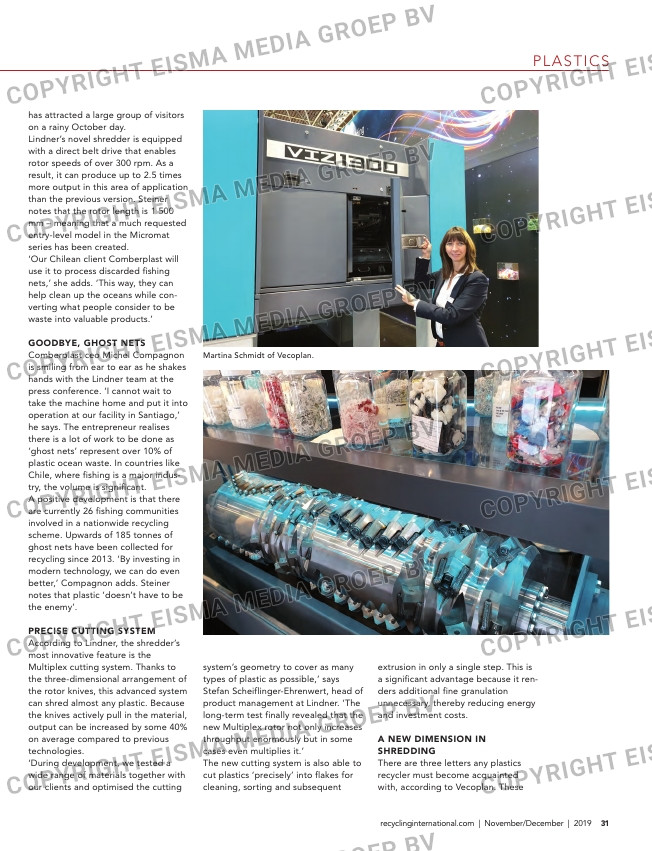 has attracted a large group of visitors
on a rainy October day.
Lindner’s novel shredder is equipped
with a direct belt drive that enables
rotor speeds of over 300 rpm. As a
result, it can produce up to 2.5 times
more output in this area of application
than the previous version. Steiner
notes that the rotor length is 1 500
mm – meaning that a much requested
entry-level model in the Micromat
series has been created.
‘Our Chilean client Comberplast will
use it to process discarded fishing
nets,’ she adds. ‘This way, they can
help clean up the oceans while con-
verting what people consider to be
waste into valuable products.’

Goodbye, Ghost nets
Comberplast ceo Michel Compagnon
is smiling from ear to ear as he shakes
hands with the Lindner team at the
press conference. ‘I cannot wait to
take the machine home and put it into
operation at our facility in Santiago,’
he says. The entrepreneur realises
there is a lot of work to be done as
‘ghost nets’ represent over 10% of
plastic ocean waste. In countries like
Chile, where fishing is a major indus-
try, the volume is significant.
A positive development is that there
are currently 26 fishing communities
involved in a nationwide recycling
scheme. Upwards of 185 tonnes of
ghost nets have been collected for
recycling since 2013. ‘By investing in
modern technology, we can do even
better,’ Compagnon adds. Steiner
notes that plastic ‘doesn’t have to be
the enemy’.

Precise cuttinG system
According to Lindner, the shredder’s
most innovative feature is the
Multiplex cutting system. Thanks to
the three-dimensional arrangement of
the rotor knives, this advanced system
can shred almost any plastic. Because
the knives actively pull in the material,
output can be increased by some 40%
on average compared to previous
technologies.
‘During development, we tested a
wide range of materials together with
our clients and optimised the cutting

system’s geometry to cover as many
types of plastic as possible,’ says
Stefan Scheiflinger-Ehrenwert, head of
product management at Lindner. ‘The
long-term test finally revealed that the
new Multiplex rotor not only increases
throughput enormously but in some
cases even multiplies it.’
The new cutting system is also able to
cut plastics ‘precisely’ into flakes for
cleaning, sorting and subsequent

extrusion in only a single step. This is
a significant advantage because it ren-
ders additional fine granulation
unnecessary, thereby reducing energy
and investment costs.

a new dimension in
shreddinG
There are three letters any plastics
recycler must become acquainted
with, according to Vecoplan. These