Subscribe
EDITORIAL 3recyclinginternational.com | May/June | 2020 It was with mixed feelings that I visited the kingdom of Saudi Arabia in February. Some of the news stories that have reached us in recent years have made this country seem f...
Read the entire page 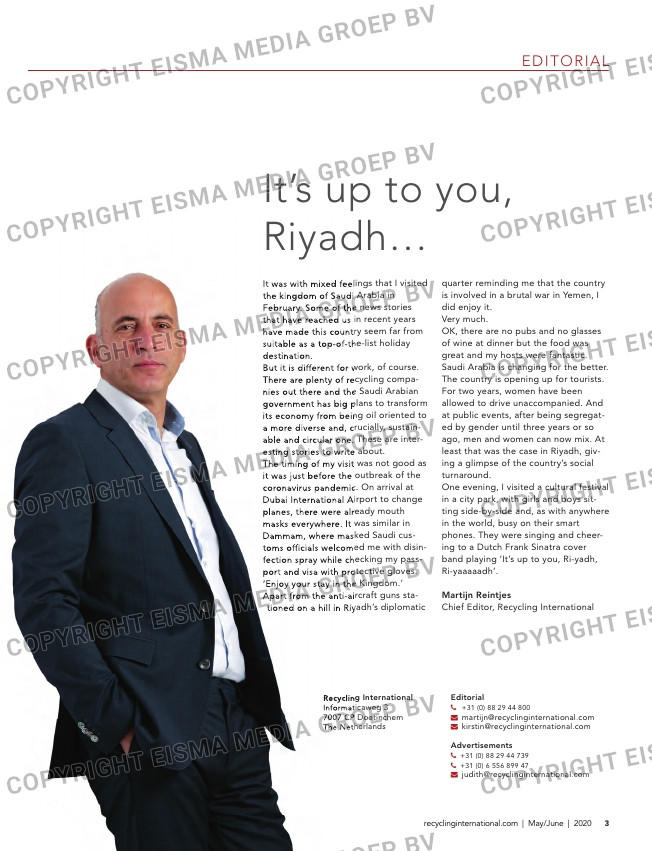 It was with mixed feelings that I visited
the kingdom of Saudi Arabia in
February. Some of the news stories
that have reached us in recent years
have made this country seem far from
suitable as a top-of-the-list holiday
destination.
But it is different for work, of course.
There are plenty of recycling compa-
nies out there and the Saudi Arabian
government has big plans to transform
its economy from being oil oriented to
a more diverse and, crucially, sustain-
able and circular one. These are inter-
esting stories to write about.
The timing of my visit was not good as
it was just before the outbreak of the
coronavirus pandemic. On arrival at
Dubai International Airport to change
planes, there were already mouth
masks everywhere. It was similar in
Dammam, where masked Saudi cus-
toms officials welcomed me with disin-
fection spray while checking my pass-
port and visa with protective gloves.
‘Enjoy your stay in the Kingdom.’
Apart from the anti-aircraft guns sta-
tioned on a hill in Riyadh’s diplomatic

quarter reminding me that the country
is involved in a brutal war in Yemen, I
did enjoy it.
Very much.
OK, there are no pubs and no glasses
of wine at dinner but the food was
great and my hosts were fantastic.
Saudi Arabia is changing for the better.
The country is opening up for tourists.
For two years, women have been
allowed to drive unaccompanied. And
at public events, after being segregat-
ed by gender until three years or so
ago, men and women can now mix. At
least that was the case in Riyadh, giv-
ing a glimpse of the country’s social
turnaround.
One evening, I visited a cultural festival
in a city park, with girls and boys sit-
ting side-by-side and, as with anywhere
in the world, busy on their smart
phones. They were singing and cheer-
ing to a Dutch Frank Sinatra cover
band playing ‘It’s up to you, Ri-yadh,
Ri-yaaaaadh’.