Subscribe
COVER STORY 29recyclinginternational.com | September/October | 2020 form a huge scrap source, as you can imagine,’ stresses Karle. Proof of this is the dozens of wrecked cars piled up at the facility. ‘Every week alone, some 2...
Read the entire page 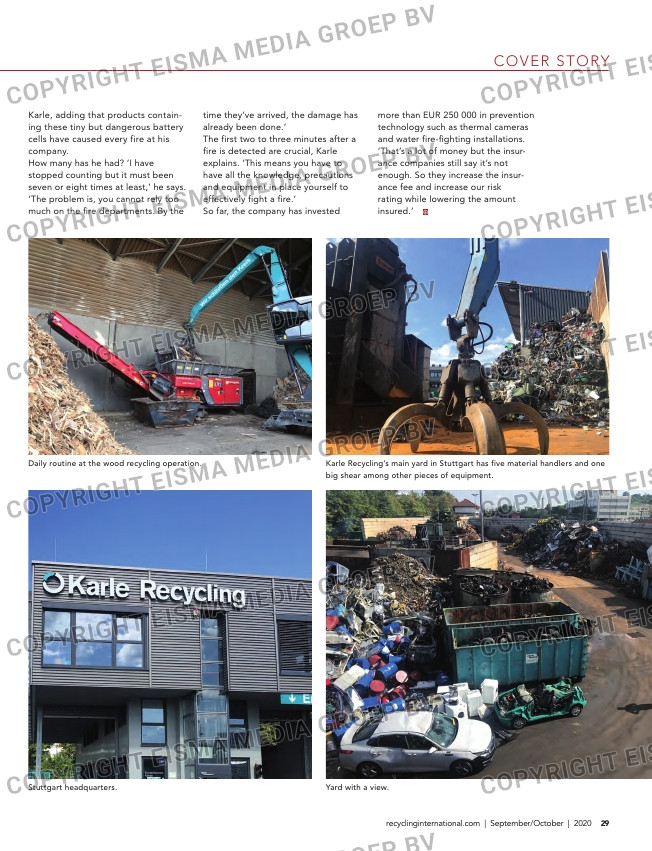 form a huge scrap source, as you can
imagine,’ stresses Karle. Proof of this
is the dozens of wrecked cars piled up
at the facility. ‘Every week alone,
some 25 Porsche test vehicles are
delivered and scrapped.’
Even so, the automotive sector has
also been causing anxiety for ferrous
recyclers worldwide, especially in
Germany. At one point during the
pandemic, national car production
almost came to a standstill and
demand for steel and scrap dropped
dramatically. Within a couple of
months, ferrous recyclers saw their
business shrink by up to 80% in some
cases. Fortunately, Karle is not among
the worst hit: ‘We have seen a
decrease of around 20%.’

BACK TO GROWTH?
The good news now is that car pro-
duction in Germany is picking up
again. It is still far from pre-coronavi-
rus numbers with some analysts antici-
pate a 25% downturn in car produc-
tion and sales this year but things are
at least improving.
Construction sites are also among
Karle Recycling’s scrap suppliers and
there are many in the area around
Stuttgart. Among the biggest con-
struction eye-catchers is an ambitious
multi billion Euro project occupying a
wide area around the main railway sta-
tion.
Meanwhile Porsche has built a EUR 1
billion factory for the development
and fabrication of the Taycan, the
brand’s first all-electric sports car.
Karle: ‘It’s another of many examples
of new company buildings and offices
popping up and that’s just perfect. We
continue to see a steady influx of
scrap from these places.’

fIGHTING SCRAP fIRES
A major and ever-growing source of
concern not only for Stephan Karle
but many fellow recyclers in Germany
and outside is the nightmare of scrap
fires. With more lithium batteries
ending up in scrap, the number of
fires has grown rapidly in recent
years. ‘It’s the same as this coronavi-
rus pandemic: we simply have to
learn to live with it, I’m afraid,’ says

Karle, adding that products contain-
ing these tiny but dangerous battery
cells have caused every fire at his
company.
How many has he had? ‘I have
stopped counting but it must been
seven or eight times at least,’ he says.
‘The problem is, you cannot rely too
much on the fire departments. By the

time they’ve arrived, the damage has
already been done.’
The first two to three minutes after a
fire is detected are crucial, Karle
explains. ‘This means you have to
have all the knowledge, precautions
and equipment in place yourself to
effectively fight a fire.’
So far, the company has invested

more than EUR 250 000 in prevention
technology such as thermal cameras
and water fire-fighting installations.
‘That’s a lot of money but the insur-
ance companies still say it’s not
enough. So they increase the insur-
ance fee and increase our risk
rating while lowering the amount
insured.’

Daily routine at the wood recycling operation. Karle Recycling’s main yard in Stuttgart has five material handlers and one
big shear among other pieces of equipment.

Stuttgart headquarters. Yard with a view.