Subscribe
PAPER & PLASTICS 29recyclinginternational.com | November/December | 2019 ® THE SHAPE OF SHREDDERforrec.eu Latin America, Africa and the Middle East will post growth of around 2.3%. Demand in Oceania will barely change, proba...
Read the entire page 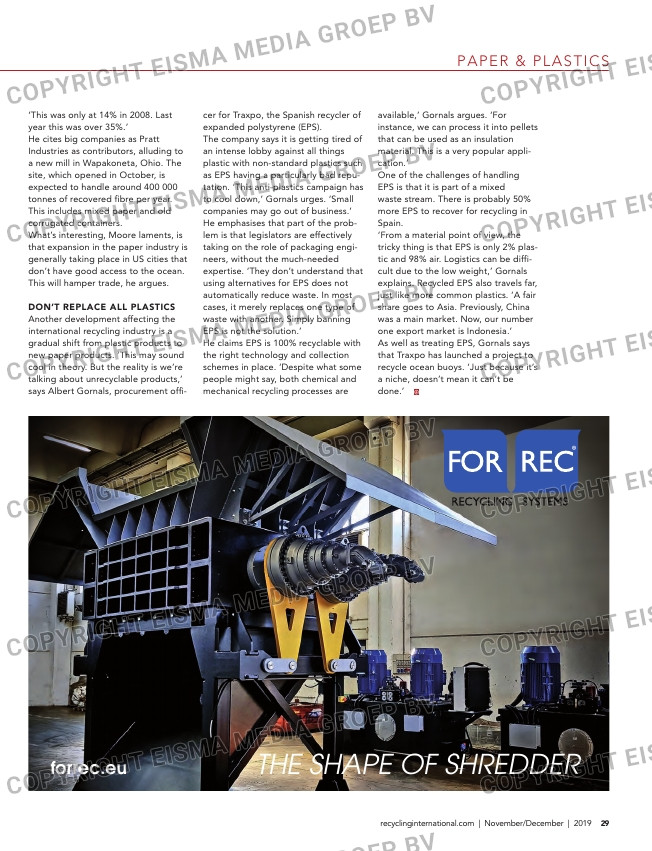 Latin America, Africa and the Middle
East will post growth of around 2.3%.
Demand in Oceania will barely
change, probably a small growth of
just under 0.5%.
Fellow Pöyry analyst Christine
Rossberg says the graphic paper
mill to paperboard conversion trend is
still visible. ‘Since this development
started circa 2010, when conversion
capacity totalled 290 000 tonnes, it’s
only increased.’ By 2016, conversion
had exceeded 380 000 tonnes. Today,
it’s said to be at approximately 624
000 tonnes. ‘Conversion will likely
reach 1.5 million tonnes in the next
few years,’ Rossberg adds. ‘At the
same time, we must be careful not to
overshoot the target.’
Meanwhile, the use of recycled fibres
in US containerboard production has
grown significantly in the last couple
of years, according to Bill Moore,
president of Moore & Associates.

‘This was only at 14% in 2008. Last
year this was over 35%.’
He cites big companies as Pratt
Industries as contributors, alluding to
a new mill in Wapakoneta, Ohio. The
site, which opened in October, is
expected to handle around 400 000
tonnes of recovered fibre per year.
This includes mixed paper and old
corrugated containers.
What’s interesting, Moore laments, is
that expansion in the paper industry is
generally taking place in US cities that
don’t have good access to the ocean.
This will hamper trade, he argues.

Don’t replace all plastics
Another development affecting the
international recycling industry is a
gradual shift from plastic products to
new paper products. ‘This may sound
cool in theory. But the reality is we’re
talking about unrecyclable products,’
says Albert Gornals, procurement offi-

cer for Traxpo, the Spanish recycler of
expanded polystyrene (EPS).
The company says it is getting tired of
an intense lobby against all things
plastic with non-standard plastics such
as EPS having a particularly bad repu-
tation. ‘This anti-plastics campaign has
to cool down,’ Gornals urges. ‘Small
companies may go out of business.’
He emphasises that part of the prob-
lem is that legislators are effectively
taking on the role of packaging engi-
neers, without the much-needed
expertise. ‘They don’t understand that
using alternatives for EPS does not
automatically reduce waste. In most
cases, it merely replaces one type of
waste with another. Simply banning
EPS is not the solution.’
He claims EPS is 100% recyclable with
the right technology and collection
schemes in place. ‘Despite what some
people might say, both chemical and
mechanical recycling processes are

available,’ Gornals argues. ‘For
instance, we can process it into pellets
that can be used as an insulation
material. This is a very popular appli-
cation.’
One of the challenges of handling
EPS is that it is part of a mixed
waste stream. There is probably 50%
more EPS to recover for recycling in
Spain.
‘From a material point of view, the
tricky thing is that EPS is only 2% plas-
tic and 98% air. Logistics can be diffi-
cult due to the low weight,’ Gornals
explains. Recycled EPS also travels far,
just like more common plastics. ‘A fair
share goes to Asia. Previously, China
was a main market. Now, our number
one export market is Indonesia.’
As well as treating EPS, Gornals says
that Traxpo has launched a project to
recycle ocean buoys. ‘Just because it’s
a niche, doesn’t mean it can’t be
done.’