Subscribe
28 form a huge scrap source, as you can imagine,’ stresses Karle. Proof of this is the dozens of wrecked cars piled up at the facility. ‘Every week alone, some 25 Porsche test vehicles are delivered and scrapped.’ Even so, the a...
Read the entire page 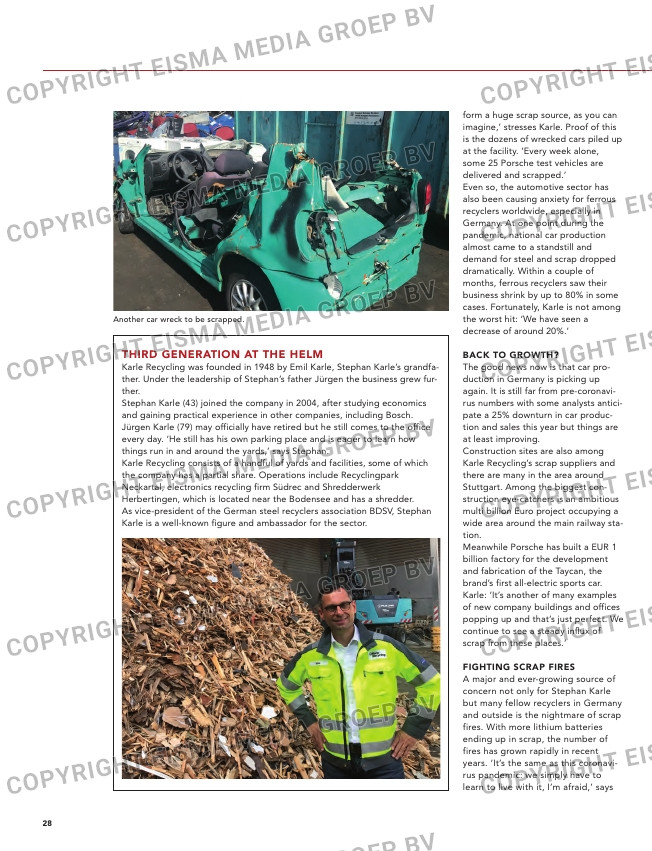 form a huge scrap source, as you can
imagine,’ stresses Karle. Proof of this
is the dozens of wrecked cars piled up
at the facility. ‘Every week alone,
some 25 Porsche test vehicles are
delivered and scrapped.’
Even so, the automotive sector has
also been causing anxiety for ferrous
recyclers worldwide, especially in
Germany. At one point during the
pandemic, national car production
almost came to a standstill and
demand for steel and scrap dropped
dramatically. Within a couple of
months, ferrous recyclers saw their
business shrink by up to 80% in some
cases. Fortunately, Karle is not among
the worst hit: ‘We have seen a
decrease of around 20%.’

BACK TO GROWTH?
The good news now is that car pro-
duction in Germany is picking up
again. It is still far from pre-coronavi-
rus numbers with some analysts antici-
pate a 25% downturn in car produc-
tion and sales this year but things are
at least improving.
Construction sites are also among
Karle Recycling’s scrap suppliers and
there are many in the area around
Stuttgart. Among the biggest con-
struction eye-catchers is an ambitious
multi billion Euro project occupying a
wide area around the main railway sta-
tion.
Meanwhile Porsche has built a EUR 1
billion factory for the development
and fabrication of the Taycan, the
brand’s first all-electric sports car.
Karle: ‘It’s another of many examples
of new company buildings and offices
popping up and that’s just perfect. We
continue to see a steady influx of
scrap from these places.’

fIGHTING SCRAP fIRES
A major and ever-growing source of
concern not only for Stephan Karle
but many fellow recyclers in Germany
and outside is the nightmare of scrap
fires. With more lithium batteries
ending up in scrap, the number of
fires has grown rapidly in recent
years. ‘It’s the same as this coronavi-
rus pandemic: we simply have to
learn to live with it, I’m afraid,’ says

Karle, adding that products contain-
ing these tiny but dangerous battery
cells have caused every fire at his
company.
How many has he had? ‘I have
stopped counting but it must been
seven or eight times at least,’ he says.
‘The problem is, you cannot rely too
much on the fire departments. By the

THIRD GENERATION AT THE HELM
Karle Recycling was founded in 1948 by Emil Karle, Stephan Karle’s grandfa-
ther. Under the leadership of Stephan’s father Jürgen the business grew fur-
ther.
Stephan Karle (43) joined the company in 2004, after studying economics
and gaining practical experience in other companies, including Bosch.
Jürgen Karle (79) may officially have retired but he still comes to the office
every day. ‘He still has his own parking place and is eager to learn how
things run in and around the yards,’ says Stephan.
Karle Recycling consists of a handful of yards and facilities, some of which
the company has a partial share. Operations include Recyclingpark
Neckartal, electronics recycling firm Südrec and Shredderwerk
Herbertingen, which is located near the Bodensee and has a shredder.
As vice-president of the German steel recyclers association BDSV, Stephan
Karle is a well-known figure and ambassador for the sector.

Another car wreck to be scrapped.