Subscribe
PAPER & PLASTICS 27recyclinginternational.com | November/December | 2019 Lyondellbasel to develop a small-scale facility in Ferrara, Italy, for the advanced chemical recycling of plas- tics. He hailed the new site as ‘another ...
Read the entire page 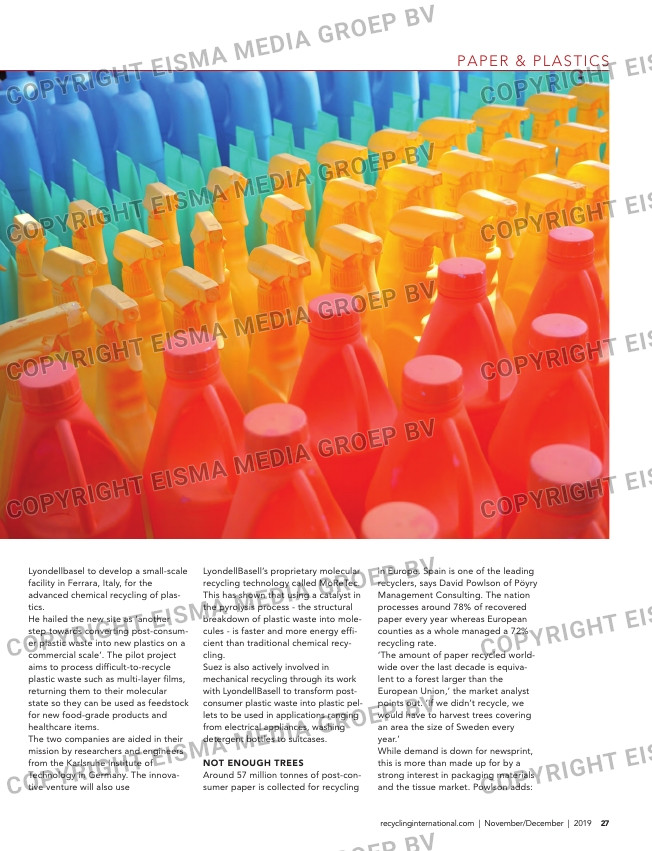 Lyondellbasel to develop a small-scale
facility in Ferrara, Italy, for the
advanced chemical recycling of plas-
tics.
He hailed the new site as ‘another
step towards converting post-consum-
er plastic waste into new plastics on a
commercial scale’. The pilot project
aims to process difficult-to-recycle
plastic waste such as multi-layer films,
returning them to their molecular
state so they can be used as feedstock
for new food-grade products and
healthcare items.
The two companies are aided in their
mission by researchers and engineers
from the Karlsruhe Institute of
Technology in Germany. The innova-
tive venture will also use

LyondellBasell’s proprietary molecular
recycling technology called MoReTec.
This has shown that using a catalyst in
the pyrolysis process – the structural
breakdown of plastic waste into mole-
cules – is faster and more energy effi-
cient than traditional chemical recy-
cling.
Suez is also actively involved in
mechanical recycling through its work
with LyondellBasell to transform post-
consumer plastic waste into plastic pel-
lets to be used in applications ranging
from electrical appliances, washing
detergent bottles to suitcases.

in Europe. Spain is one of the leading
recyclers, says David Powlson of Pöyry
Management Consulting. The nation
processes around 78% of recovered
paper every year whereas European
counties as a whole managed a 72%
recycling rate.
‘The amount of paper recycled world-
wide over the last decade is equiva-
lent to a forest larger than the
European Union,’ the market analyst
points out. ‘If we didn’t recycle, we
would have to harvest trees covering
an area the size of Sweden every
year.’
While demand is down for newsprint,
this is more than made up for by a
strong interest in packaging materials
and the tissue market. Powlson adds: