Subscribe
a u t h o r Kirstin Linnenkoper 26 Few clouds in the sky when it comes to packaging materials ‘the world has a growing appetite for plastics – and Spain is no exception,’ declares Maria rodriguez of Grupo Lantero at the annual...
Read the entire page 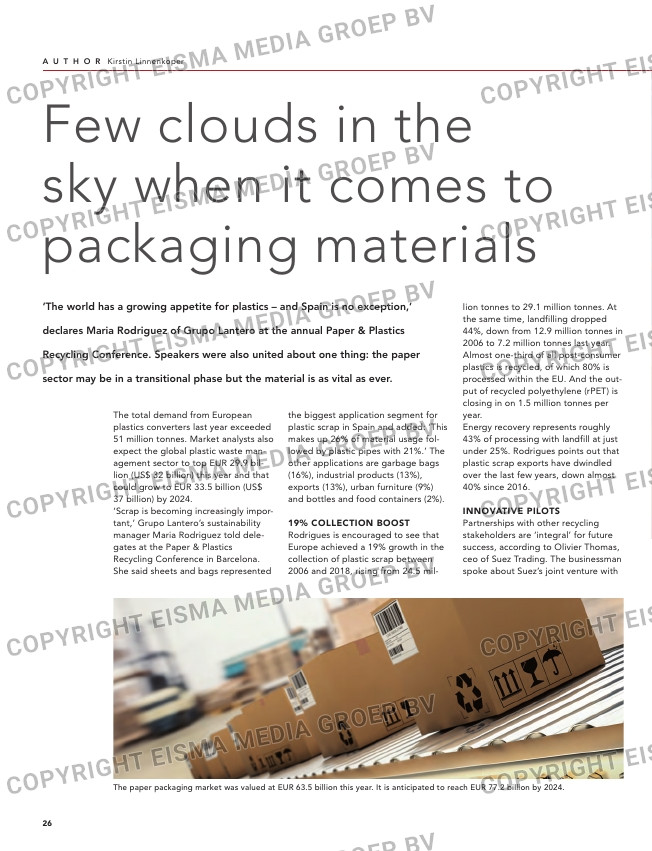 Few clouds in the
sky when it comes to
packaging materials
‘the world has a growing appetite for plastics – and Spain is no exception,’

recycling Conference. Speakers were also united about one thing: the paper

sector may be in a transitional phase but the material is as vital as ever.

Lyondellbasel to develop a small-scale
facility in Ferrara, Italy, for the
advanced chemical recycling of plas-
tics.
He hailed the new site as ‘another
step towards converting post-consum-
er plastic waste into new plastics on a
commercial scale’. The pilot project
aims to process difficult-to-recycle
plastic waste such as multi-layer films,
returning them to their molecular
state so they can be used as feedstock
for new food-grade products and
healthcare items.
The two companies are aided in their
mission by researchers and engineers
from the Karlsruhe Institute of
Technology in Germany. The innova-
tive venture will also use

the biggest application segment for
plastic scrap in Spain and added: ‘This
makes up 26% of material usage fol-
lowed by plastic pipes with 21%.’ The
other applications are garbage bags
(16%), industrial products (13%),
exports (13%), urban furniture (9%)
and bottles and food containers (2%).

19% collection boost
Rodrigues is encouraged to see that
Europe achieved a 19% growth in the
collection of plastic scrap between
2006 and 2018, rising from 24.5 mil-

lion tonnes to 29.1 million tonnes. At
the same time, landfilling dropped
44%, down from 12.9 million tonnes in
2006 to 7.2 million tonnes last year.
Almost one-third of all post-consumer
plastics is recycled, of which 80% is
processed within the EU. And the out-
put of recycled polyethylene (rPET) is
closing in on 1.5 million tonnes per
year.
Energy recovery represents roughly
43% of processing with landfill at just
under 25%. Rodrigues points out that
plastic scrap exports have dwindled
over the last few years, down almost
40% since 2016.

innovative pilots
Partnerships with other recycling
stakeholders are ‘integral’ for future
success, according to Olivier Thomas,
ceo of Suez Trading. The businessman
spoke about Suez’s joint venture with

The paper packaging market was valued at EUR 63.5 billion this year. It is anticipated to reach EUR 77.2 billion by 2024.