Subscribe
COUNTRY REPORT 23recyclinginternational.com | May/June | 2020 and industrial areas of this metropolis of 5.6 million people, it’s straight ahead eastwards on the Dammam Highway through dusty desert land. Here and there is a ten...
Read the entire page 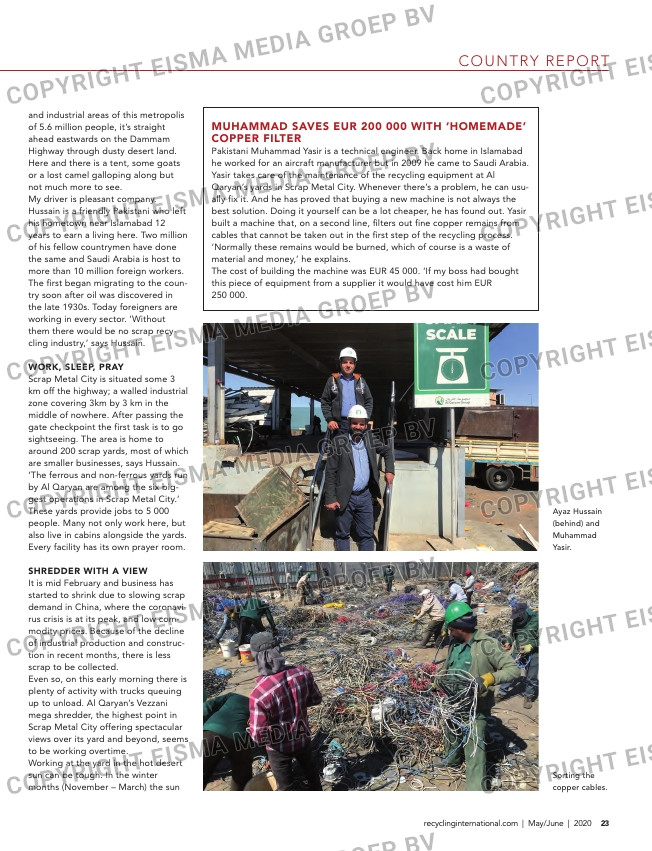 and industrial areas of this metropolis
of 5.6 million people, it’s straight
ahead eastwards on the Dammam
Highway through dusty desert land.
Here and there is a tent, some goats
or a lost camel galloping along but
not much more to see.
My driver is pleasant company.
Hussain is a friendly Pakistani who left
his hometown near Islamabad 12
years to earn a living here. Two million
of his fellow countrymen have done
the same and Saudi Arabia is host to
more than 10 million foreign workers.
The first began migrating to the coun-
try soon after oil was discovered in
the late 1930s. Today foreigners are
working in every sector. ‘Without
them there would be no scrap recy-
cling industry,’ says Hussain.

WORK, SLEEP, PRAY
Scrap Metal City is situated some 3
km off the highway; a walled industrial
zone covering 3km by 3 km in the
middle of nowhere. After passing the
gate checkpoint the first task is to go
sightseeing. The area is home to
around 200 scrap yards, most of which
are smaller businesses, says Hussain.
‘The ferrous and non-ferrous yards run
by Al Qaryan are among the six big-
gest operations in Scrap Metal City.’
These yards provide jobs to 5 000
people. Many not only work here, but
also live in cabins alongside the yards.
Every facility has its own prayer room.

SHREDDER WITH A VIEW
It is mid February and business has
started to shrink due to slowing scrap
demand in China, where the coronavi-
rus crisis is at its peak, and low com-
modity prices. Because of the decline
of industrial production and construc-
tion in recent months, there is less
scrap to be collected.
Even so, on this early morning there is
plenty of activity with trucks queuing
up to unload. Al Qaryan’s Vezzani
mega shredder, the highest point in
Scrap Metal City offering spectacular
views over its yard and beyond, seems
to be working overtime.
Working at the yard in the hot desert
sun can be tough. In the winter
months (November – March) the sun

MuHAMMAD SAVES EuR 200 000 WITH ‘HOMEMADE’
cOPPER fILTER
Pakistani Muhammad Yasir is a technical engineer. Back home in Islamabad
he worked for an aircraft manufacturer but in 2009 he came to Saudi Arabia.
Yasir takes care of the maintenance of the recycling equipment at Al
Qaryan’s yards in Scrap Metal City. Whenever there’s a problem, he can usu-
ally fix it. And he has proved that buying a new machine is not always the
best solution. Doing it yourself can be a lot cheaper, he has found out. Yasir
built a machine that, on a second line, filters out fine copper remains from
cables that cannot be taken out in the first step of the recycling process.
‘Normally these remains would be burned, which of course is a waste of
material and money,’ he explains.
The cost of building the machine was EUR 45 000. ‘If my boss had bought
this piece of equipment from a supplier it would have cost him EUR
250 000.

Ayaz Hussain
(behind) and
Muhammad
Yasir.