Subscribe
a u t h o r Martijn Reintjes 22 Sourcing Athens..... .....and the Cyclades E - s c r a p re c y c l e r B i a n a t t Greece’s scrap recycling industry was among the sectors worst hit by the country’s economic crisis. But recyc...
Read the entire page 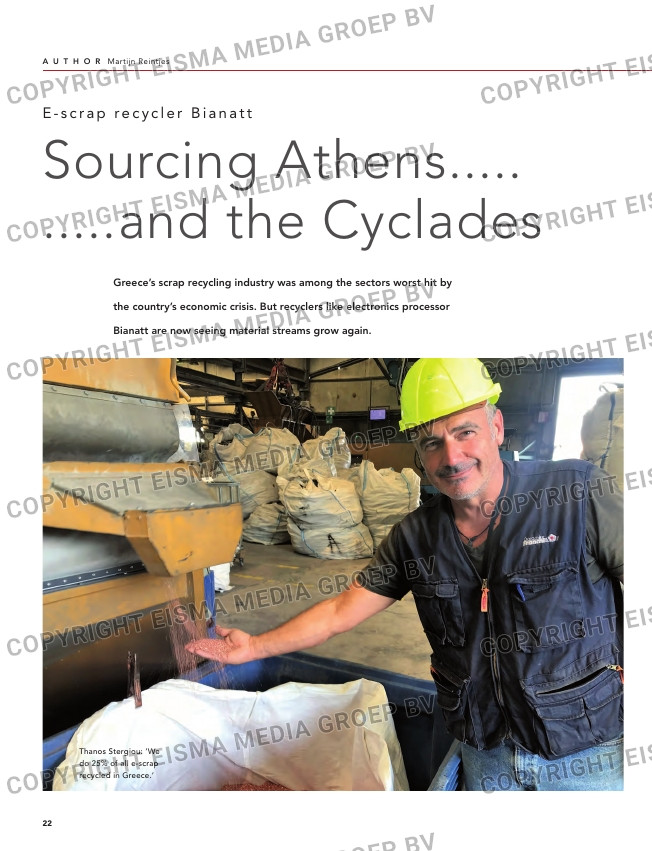 Sourcing Athens…..
…..and the Cyclades

the country’s economic crisis. But recyclers like electronics processor

From 2008 to 2015, scrap flows and
volumes in Greece shrank by 20-30%
every year. Capital controls enforced
by the EU made things even worse.
Scrap input dried up: in 2015-16, less
than 350 000 tonnes of ferrous scrap
were generated as opposed to 1.3
million tonnes in 2008-09. Yard own-
ers described the situation at the time
as ‘a tragedy’ and ‘a complete night-
mare’.
After a 10-year crisis, Greece’s econo-
my is showing signs of recovery,
according to the Greek government,
which forecasts 2.2% economic
growth in 2020.
Even so, the country’s national debt
and its jobless rate are still the highest
in Europe. ‘In Athens, thousands of
households still don’t have enough
money to buy their daily food,’ says
my taxi driver by way of illustration.

Helping tHe fire-figHters
The condition of Greece’s state financ-
es becomes painfully clear when chat-
ting to Dr Thanos Stergiou, general
manager of Bianatt, one of the big-
gest electronics recycling companies
in Greece. ‘We sponsored the fire
department by giving money to buy
new tyres for the fire trucks,’ says
Stergiou. ‘You’d wish this would not
be necessary. Obviously it is in our
own interest so that, if we have a fire
at our facility, the fire fighters are suf-
ficiently well-equipped to do the job.’
Bianatt, which is part of the Anamet
Group, one of the leading recycling
companies in Greece, is located in the
Athens West industrial area
(Aspropyrgos), a 45-minute drive from
the city centre. The company, which
employs around 50 people, covers 12
000 m2. Indoor facilities extend over
5 500 m2 and include modern pro-
cessing lines, as well as storage areas
for recyclable materials. Sorting,
depolluting, disassembling – every-
thing is done according to the latest
standards and with state-of-the art
equipment and technology.

25% market sHare
Founded in 2007, Bianatt is one of
seven electronics recyclers in Greece.
Together, they cover a market of

Thanos Stergiou: ‘We
do 25% of all e-scrap
recycled in Greece.’