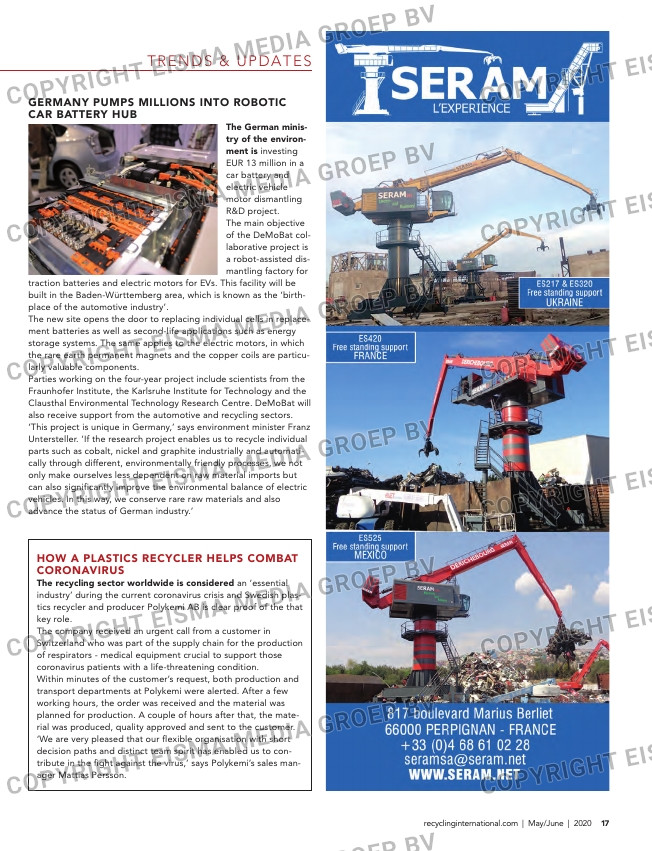 how a plastics recycler helps comBat
coronavirus
the recycling sector worldwide is considered an ‘essential
industry’ during the current coronavirus crisis and Swedish plas-
tics recycler and producer Polykemi AB is clear proof of the that
key role.
The company received an urgent call from a customer in
Switzerland who was part of the supply chain for the production
of respirators – medical equipment crucial to support those
coronavirus patients with a life-threatening condition.
Within minutes of the customer’s request, both production and
transport departments at Polykemi were alerted. After a few
working hours, the order was received and the material was
planned for production. A couple of hours after that, the mate-
rial was produced, quality approved and sent to the customer.
‘We are very pleased that our flexible organisation with short
decision paths and distinct team spirit has enabled us to con-
tribute in the fight against the virus,’ says Polykemi’s sales man-
ager Mattias Persson.

detained scottish rigs ‘on route to
indian BreaKers’
oil rigs operated by diamond offshore have been scrapped at the
widely criticised shipbreaking yards in Alang, India. A new BBC docu-
mentary reveals how a ‘middleman’, Global Marketing Systems
(GMS), purchased five rigs and sold them to cash buyers with a repu-
tation for dismantling vessels under ‘poor conditions’ in South Asia.
The first transaction, in 2017, involved two US rigs – the Ocean
Alliance and the Ocean Baroness. They left the Gulf of Mexico and
ended up at a beaching facility in Alang where industry sources say
at least 137 workers have died over the last decade.
Three more rigs, which had been operating in Scottish waters, were
allegedly due to follow the same route but they were detained
locally in Cromarty Firth by officials of the Scottish Environment
Protection Agency (SEPA). Chief executive Terry A’Hearn insists the
units will remain there until a recycling partner has been found to
dismantle them ‘properly’.
The cases are said to represent a clear breach of UK and interna-
tional law, which prevents the movement of such waste from the UK
to developing countries. While Diamond Offshore did not directly
sell the oil rigs to Indian shipbreakers, A’hearn argues that the com-
pany had a duty of care under the law. In short, it had to be certain
the rigs were going to a party who would ‘do the right thing’.
Ingvild Jenssen, founder of the NGO Shipbreaking Platform, is not
surprised at the development. ‘Western shipping companies are
earning millions of dollars exploiting poor practices in South Asia,’
she says, claiming that the Hariyana shipbreaking yard, where the
Ocean Alliance was scrapped, pays workers only 35 cents an hour.
The BBC documentary includes secret drone footage showing
workers operating acetylene torches without breathing masks or
protective clothing.
Diamond Offshore insists its sales contracts require ‘those that we
contract with to comply with all applicable laws’. This includes the
preparation, transport and recycling of rigs. A spokesperson says:
‘The rigs ceased to be part of the Diamond fleet more than two
years ago and we are therefore not in a position to comment on the
current status or future plans for these rigs.’
GMS denies owning the rigs detained in Scotland or that it was
about to move them to India in breach of regulations.
‘Many more offshore assets will need to be scrapped in the coming
years,’ Jenssen points out. ‘Companies that have owned and operated
these units are responsible for ensuring that they are recycled without
harming workers and the environment. For any unit having operated in
the North Sea, there are more than enough options within Europe.’

the german minis-
try of the environ-
ment is investing
EUR 13 million in a
car battery and
electric vehicle
motor dismantling
R&D project.
The main objective
of the DeMoBat col-
laborative project is
a robot-assisted dis-
mantling factory for

traction batteries and electric motors for EVs. This facility will be
built in the Baden-Württemberg area, which is known as the ‘birth-
place of the automotive industry’.
The new site opens the door to replacing individual cells in replace-
ment batteries as well as second-life applications such as energy
storage systems. The same applies to the electric motors, in which
the rare earth permanent magnets and the copper coils are particu-
larly valuable components.
Parties working on the four-year project include scientists from the
Fraunhofer Institute, the Karlsruhe Institute for Technology and the
Clausthal Environmental Technology Research Centre. DeMoBat will
also receive support from the automotive and recycling sectors.
‘This project is unique in Germany,’ says environment minister Franz
Untersteller. ‘If the research project enables us to recycle individual
parts such as cobalt, nickel and graphite industrially and automati-
cally through different, environmentally friendly processes, we not
only make ourselves less dependent on raw material imports but
can also significantly improve the environmental balance of electric
vehicles. In this way, we conserve rare raw materials and also
advance the status of German industry.’