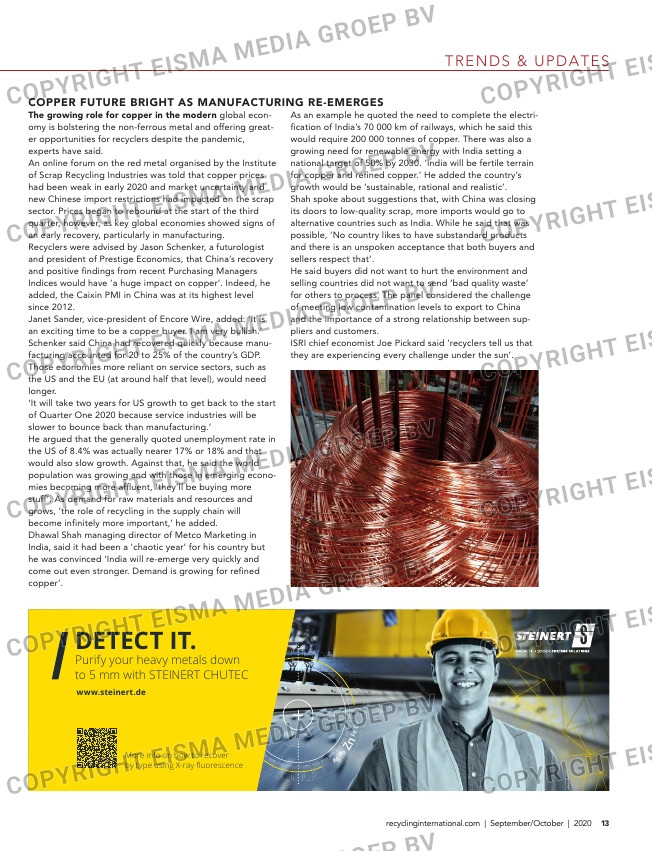 Copper future Bright as manufaCturing re-emerges
the growing role for copper in the modern global econ-
omy is bolstering the non-ferrous metal and offering great-
er opportunities for recyclers despite the pandemic,
experts have said.
An online forum on the red metal organised by the Institute
of Scrap Recycling Industries was told that copper prices
had been weak in early 2020 and market uncertainty and
new Chinese import restrictions had impacted on the scrap
sector. Prices began to rebound at the start of the third
quarter, however, as key global economies showed signs of
an early recovery, particularly in manufacturing.
Recyclers were advised by Jason Schenker, a futurologist
and president of Prestige Economics, that China’s recovery
and positive findings from recent Purchasing Managers
Indices would have ‘a huge impact on copper’. Indeed, he
added, the Caixin PMI in China was at its highest level
since 2012.
Janet Sander, vice-president of Encore Wire, added: ‘It is
an exciting time to be a copper buyer. I am very bullish.’
Schenker said China had recovered quickly because manu-
facturing accounted for 20 to 25% of the country’s GDP.
Those economies more reliant on service sectors, such as
the US and the EU (at around half that level), would need
longer.
‘It will take two years for US growth to get back to the start
of Quarter One 2020 because service industries will be
slower to bounce back than manufacturing.’
He argued that the generally quoted unemployment rate in
the US of 8.4% was actually nearer 17% or 18% and that
would also slow growth. Against that, he said the world
population was growing and with those in emerging econo-
mies becoming more affluent, ‘they’ll be buying more
stuff’. As demand for raw materials and resources and
grows, ‘the role of recycling in the supply chain will
become infinitely more important,’ he added.
Dhawal Shah managing director of Metco Marketing in
India, said it had been a ‘chaotic year’ for his country but
he was convinced ‘India will re-emerge very quickly and
come out even stronger. Demand is growing for refined
copper’.

As an example he quoted the need to complete the electri-
fication of India’s 70 000 km of railways, which he said this
would require 200 000 tonnes of copper. There was also a
growing need for renewable energy with India setting a
national target of 50% by 2030. ‘India will be fertile terrain
for copper and refined copper.’ He added the country’s
growth would be ‘sustainable, rational and realistic’.
Shah spoke about suggestions that, with China was closing
its doors to low-quality scrap, more imports would go to
alternative countries such as India. While he said that was
possible, ‘No country likes to have substandard products
and there is an unspoken acceptance that both buyers and
sellers respect that’.
He said buyers did not want to hurt the environment and
selling countries did not want to send ‘bad quality waste’
for others to process. The panel considered the challenge
of meeting low contamination levels to export to China
and the importance of a strong relationship between sup-
pliers and customers.
ISRI chief economist Joe Pickard said ‘recyclers tell us that
they are experiencing every challenge under the sun’.