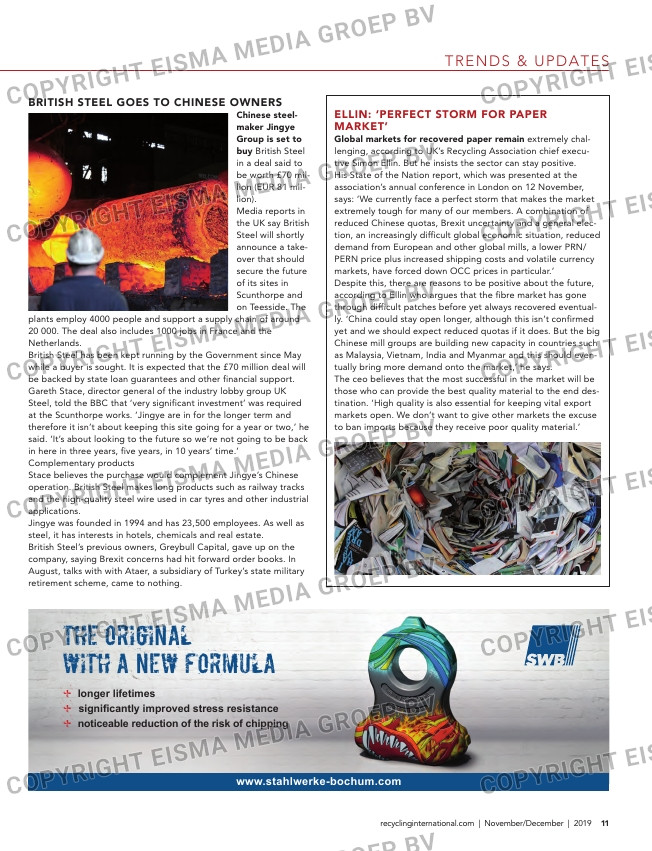 Basf commIts to chemIcal recyclIng
chemical giant Basf is to invest eur 20 million into a partner-
ship with a Norwegian pyrolysis specialist to boost the chemical
recycling of mixed plastic waste.
Quantafuel’s expertise in the integrated process of pyrolysis and
purification will be optimised so the output can used as feedstock
in chemical production. In a second step, Quantafuel will license
the technology to other parties.
The Oslo-based company plans a pyrolysis and purification plant
with a capacity of approximately 16 000 tonnes per year at Skive,
Denmark, with building work starting this year.
BASF will have first refusal to all pyrolysis oil and purified hydrocar-
bons from the new plant for the first four years. It will use these
secondary raw materials in its patented ChemCycling production
project to develop the market for chemically recycled plastics.
At BASF’s Ludwigshafen site, the recycled raw materials will be fed
into the production process, partially replacing the dependency on
fossil resources. To increase commercial opportunities, the partners
plan to build other plants to produce purified hydrocarbons via
chemical recycling.
Sustainability commitment
‘The investment underlines BASF’s commitment towards a sustain-
able use of resources and the development of a circular economy
model for plastics,’ says Hartwig Michels, President Petrochemicals,
BASF. ‘The partnership is a first step to build up a broad supply
base for ChemCycling products. This enables us to support our
customers in achieving their sustainability targets.’
Kjetil Bøhn, ceo of Quantafuel added, ‘We are of course honoured
that BASF has decided to invest both financial and human resourc-
es in our quest to become the leading technology company for
recycling of a broad spectrum of mixed plastic waste based on our
unique purification step,’ BASF started its ChemCycling project in
2018 and produced early prototypes based on chemically recycled
plastic waste – including food packaging for which particularly high
quality and hygiene standards apply.
‘On the regulatory side, authorities need to more broadly establish
a technology-open definition of recycling, allowing that the use of
chemical recycling processes can count towards recycling targets,’
says Michels. ‘Incentives for recycled content should apply equally
to all types of recycling and we also need full acceptance of mass
balance approaches.’

BrItIsh steel goes to chInese owners
chinese steel-
maker jingye
group is set to
buy British Steel
in a deal said to
be worth £70 mil-
lion (EUR 81 mil-
lion).
Media reports in
the UK say British
Steel will shortly
announce a take-
over that should
secure the future
of its sites in
Scunthorpe and
on Teesside. The

plants employ 4000 people and support a supply chain of around
20 000. The deal also includes 1000 jobs in France and the
Netherlands.
British Steel has been kept running by the Government since May
while a buyer is sought. It is expected that the £70 million deal will
be backed by state loan guarantees and other financial support.
Gareth Stace, director general of the industry lobby group UK
Steel, told the BBC that ‘very significant investment’ was required
at the Scunthorpe works. ‘Jingye are in for the longer term and
therefore it isn’t about keeping this site going for a year or two,’ he
said. ‘It’s about looking to the future so we’re not going to be back
in here in three years, five years, in 10 years’ time.’
Complementary products
Stace believes the purchase would complement Jingye’s Chinese
operation. British Steel makes long products such as railway tracks
and the high-quality steel wire used in car tyres and other industrial
applications.
Jingye was founded in 1994 and has 23,500 employees. As well as
steel, it has interests in hotels, chemicals and real estate.
British Steel’s previous owners, Greybull Capital, gave up on the
company, saying Brexit concerns had hit forward order books. In
August, talks with with Ataer, a subsidiary of Turkey’s state military
retirement scheme, came to nothing.

ellIn: ‘Perfect storm for PaPer
market’
global markets for recovered paper remain extremely chal-
lenging, according to UK’s Recycling Association chief execu-
tive Simon Ellin. But he insists the sector can stay positive.
His State of the Nation report, which was presented at the
association’s annual conference in London on 12 November,
says: ‘We currently face a perfect storm that makes the market
extremely tough for many of our members. A combination of
reduced Chinese quotas, Brexit uncertainty and a general elec-
tion, an increasingly difficult global economic situation, reduced
demand from European and other global mills, a lower PRN/
PERN price plus increased shipping costs and volatile currency
markets, have forced down OCC prices in particular.’
Despite this, there are reasons to be positive about the future,
according to Ellin who argues that the fibre market has gone
through difficult patches before yet always recovered eventual-
ly. ‘China could stay open longer, although this isn’t confirmed
yet and we should expect reduced quotas if it does. But the big
Chinese mill groups are building new capacity in countries such
as Malaysia, Vietnam, India and Myanmar and this should even-
tually bring more demand onto the market,’ he says.
The ceo believes that the most successful in the market will be
those who can provide the best quality material to the end des-
tination. ‘High quality is also essential for keeping vital export
markets open. We don’t want to give other markets the excuse
to ban imports because they receive poor quality material.’