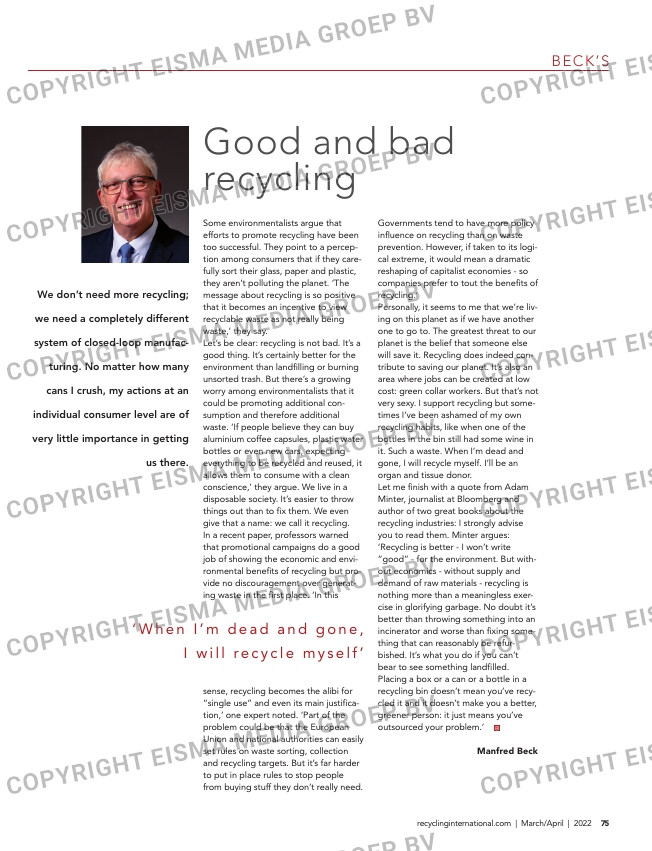 we need a completely different

turing. No matter how many

cans I crush, my actions at an

individual consumer level are of

very little importance in getting

Some environmentalists argue that
efforts to promote recycling have been
too successful. They point to a percep-
tion among consumers that if they care-
fully sort their glass, paper and plastic,
they aren’t polluting the planet. ‘The
message about recycling is so positive
that it becomes an incentive to view
recyclable waste as not really being
waste,’ they say.
Let’s be clear: recycling is not bad. It’s a
good thing. It’s certainly better for the
environment than landfilling or burning
unsorted trash. But there’s a growing
worry among environmentalists that it
could be promoting additional con-
sumption and therefore additional
waste. ‘If people believe they can buy
aluminium coffee capsules, plastic water
bottles or even new cars, expecting
everything to be recycled and reused, it
allows them to consume with a clean
conscience,’ they argue. We live in a
disposable society. It’s easier to throw
things out than to fix them. We even
give that a name: we call it recycling.
In a recent paper, professors warned
that promotional campaigns do a good
job of showing the economic and envi-
ronmental benefits of recycling but pro-
vide no discouragement over generat-
ing waste in the first place. ‘In this

sense, recycling becomes the alibi for
“single use” and even its main justifica-
tion,’ one expert noted. ‘Part of the
problem could be that the European
Union and national authorities can easily
set rules on waste sorting, collection
and recycling targets. But it’s far harder
to put in place rules to stop people
from buying stuff they don’t really need.

Governments tend to have more policy
influence on recycling than on waste
prevention. However, if taken to its logi-
cal extreme, it would mean a dramatic
reshaping of capitalist economies – so
companies prefer to tout the benefits of
recycling.’
Personally, it seems to me that we’re liv-
ing on this planet as if we have another
one to go to. The greatest threat to our
planet is the belief that someone else
will save it. Recycling does indeed con-
tribute to saving our planet. It’s also an
area where jobs can be created at low
cost: green collar workers. But that’s not
very sexy. I support recycling but some-
times I’ve been ashamed of my own
recycling habits, like when one of the
bottles in the bin still had some wine in
it. Such a waste. When I’m dead and
gone, I will recycle myself. I’ll be an
organ and tissue donor.
Let me finish with a quote from Adam
Minter, journalist at Bloomberg and
author of two great books about the
recycling industries: I strongly advise
you to read them. Minter argues:
‘Recycling is better – I won’t write
“good” – for the environment. But with-
out economics – without supply and
demand of raw materials – recycling is
nothing more than a meaningless exer-
cise in glorifying garbage. No doubt it’s
better than throwing something into an
incinerator and worse than fixing some-
thing that can reasonably be refur-
bished. It’s what you do if you can’t
bear to see something landfilled.
Placing a box or a can or a bottle in a
recycling bin doesn’t mean you’ve recy-
cled it and it doesn’t make you a better,
greener person: it just means you’ve
outsourced your problem.’