Subscribe
MARKET ANALYSIS Little sign of market slowdown Demand for recovered paper which drove pro- duction and exports in 2021 has continued into the New Year. 68 tantly gearing up to match demand but whether that will be enough remains t...
Read the entire page 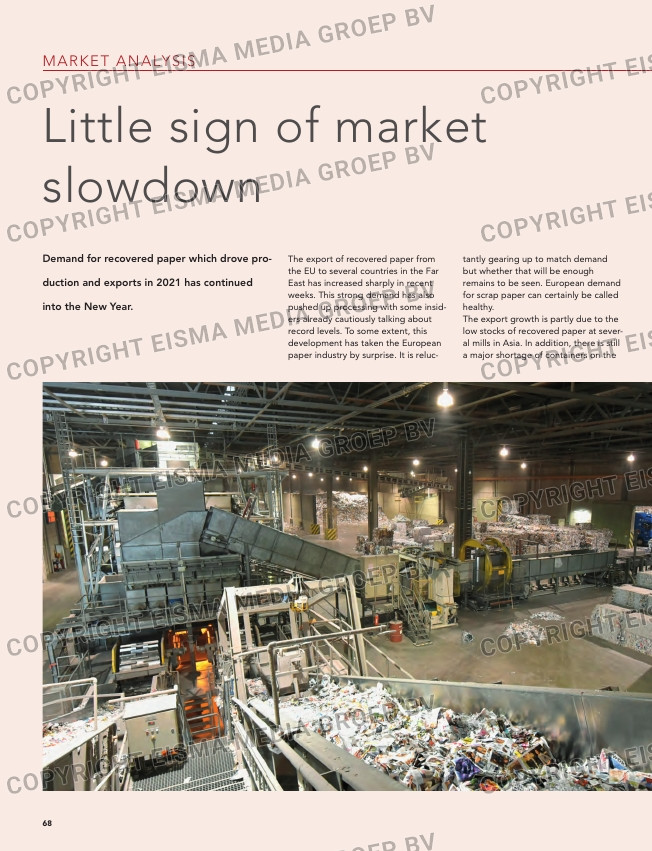 duction and exports in 2021 has continued

into the New Year.

tantly gearing up to match demand
but whether that will be enough
remains to be seen. European demand
for scrap paper can certainly be called
healthy.
The export growth is partly due to the
low stocks of recovered paper at sever-
al mills in Asia. In addition, there is still
a major shortage of containers on the

west coast of the US to ship scrap
paper to customers in Asia. As a result,
large volumes are being stored on the
west coast. Container shortage is less
acute on the east coast of America and
in Europe. ‘The situation for sea trans-
port with containers is significantly bet-
ter in the Atlantic than in the Pacific,’
reports one trader.
After a small dip in January, European
prices for recovered paper sub-types
are back at the level of December
2021. Mid-range and better grades are
doing well with rising indices. That is
certainly exceptional for the medium
varieties in February. The supply side is
lower than usual, probably caused by
less collection due to coronavirus and
lockdowns.

The export of recovered paper from
the EU to several countries in the Far
East has increased sharply in recent
weeks. This strong demand has also
pushed up processing with some insid-
ers already cautiously talking about
record levels. To some extent, this
development has taken the European
paper industry by surprise. It is reluc-