Subscribe
NON-FERROUS Confident times as demand is sustained Patrik Berglund, ceo of Xeneta, says carriers are in a position to dictate terms to smaller shippers, through ele- vated rates and limiting availability, while locking in ‘bigger fi...
Read the entire page 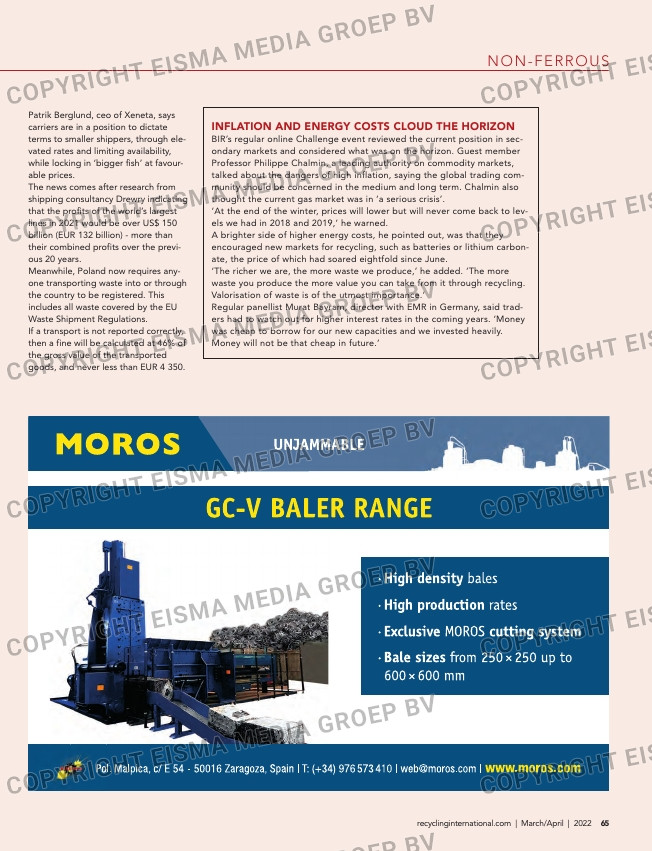 Confident times as demand
is sustained

Patrik Berglund, ceo of Xeneta, says
carriers are in a position to dictate
terms to smaller shippers, through ele-
vated rates and limiting availability,
while locking in ‘bigger fish’ at favour-
able prices.
The news comes after research from
shipping consultancy Drewry indicating
that the profits of the world’s largest
lines in 2021 would be over US$ 150
billion (EUR 132 billion) – more than
their combined profits over the previ-
ous 20 years.
Meanwhile, Poland now requires any-
one transporting waste into or through
the country to be registered. This
includes all waste covered by the EU
Waste Shipment Regulations.
If a transport is not reported correctly,
then a fine will be calculated at 46% of
the gross value of the transported
goods, and never less than EUR 4 350.

INFLATION AND ENERGY COSTS CLOUD THE HORIZON
BIR’s regular online Challenge event reviewed the current position in sec-
ondary markets and considered what was on the horizon. Guest member
Professor Philippe Chalmin, a leading authority on commodity markets,
talked about the dangers of high inflation, saying the global trading com-
munity should be concerned in the medium and long term. Chalmin also
thought the current gas market was in ‘a serious crisis’.
‘At the end of the winter, prices will lower but will never come back to lev-
els we had in 2018 and 2019,’ he warned.
A brighter side of higher energy costs, he pointed out, was that they
encouraged new markets for recycling, such as batteries or lithium carbon-
ate, the price of which had soared eightfold since June.
‘The richer we are, the more waste we produce,’ he added. ‘The more
waste you produce the more value you can take from it through recycling.
Valorisation of waste is of the utmost importance.’
Regular panellist Murat Bayram, director with EMR in Germany, said trad-
ers had to watch out for higher interest rates in the coming years. ‘Money
was cheap to borrow for our new capacities and we invested heavily.
Money will not be that cheap in future.’