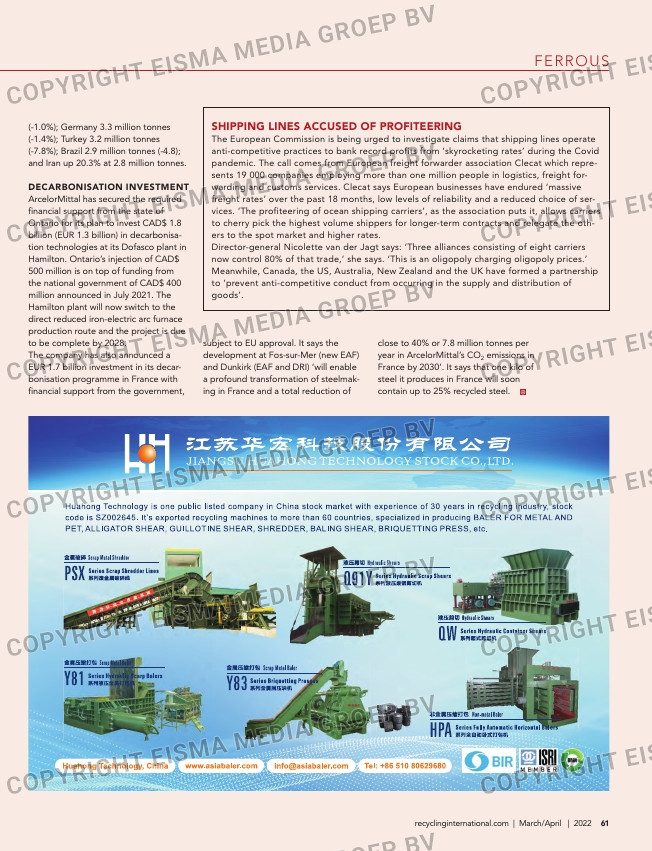 DECARBONISATION INVESTMENT
ArcelorMittal has secured the required
financial support from the state of
Ontario for its plan to invest CAD$ 1.8
billion (EUR 1.3 billion) in decarbonisa-
tion technologies at its Dofasco plant in
Hamilton. Ontario’s injection of CAD$
500 million is on top of funding from
the national government of CAD$ 400
million announced in July 2021. The
Hamilton plant will now switch to the
direct reduced iron-electric arc furnace
production route and the project is due
to be complete by 2028.
The company has also announced a
EUR 1.7 billion investment in its decar-
bonisation programme in France with
financial support from the government,

subject to EU approval. It says the
development at Fos-sur-Mer (new EAF)
and Dunkirk (EAF and DRI) ‘will enable
a profound transformation of steelmak-
ing in France and a total reduction of

close to 40% or 7.8 million tonnes per
year in ArcelorMittal’s CO2 emissions in
France by 2030’. It says that one kilo of
steel it produces in France will soon
contain up to 25% recycled steel.

SHIPPING LINES ACCUSED OF PROFITEERING
The European Commission is being urged to investigate claims that shipping lines operate
anti-competitive practices to bank record profits from ‘skyrocketing rates’ during the Covid
pandemic. The call comes from European freight forwarder association Clecat which repre-
sents 19 000 companies employing more than one million people in logistics, freight for-
warding and customs services. Clecat says European businesses have endured ‘massive
freight rates’ over the past 18 months, low levels of reliability and a reduced choice of ser-
vices. ‘The profiteering of ocean shipping carriers’, as the association puts it, allows carriers
to cherry pick the highest volume shippers for longer-term contracts and relegate the oth-
ers to the spot market and higher rates.
Director-general Nicolette van der Jagt says: ‘Three alliances consisting of eight carriers
now control 80% of that trade,’ she says. ‘This is an oligopoly charging oligopoly prices.’
Meanwhile, Canada, the US, Australia, New Zealand and the UK have formed a partnership
to ‘prevent anti-competitive conduct from occurring in the supply and distribution of
goods’.