Subscribe
40 tors to consider at end-of-life stage. Without an XRF analyser, the recycler is pretty much blind.’ Standard samples being tested are commonly crushed, dried and sieved to a constant size, homogenised, and then presented to the a...
Read the entire page 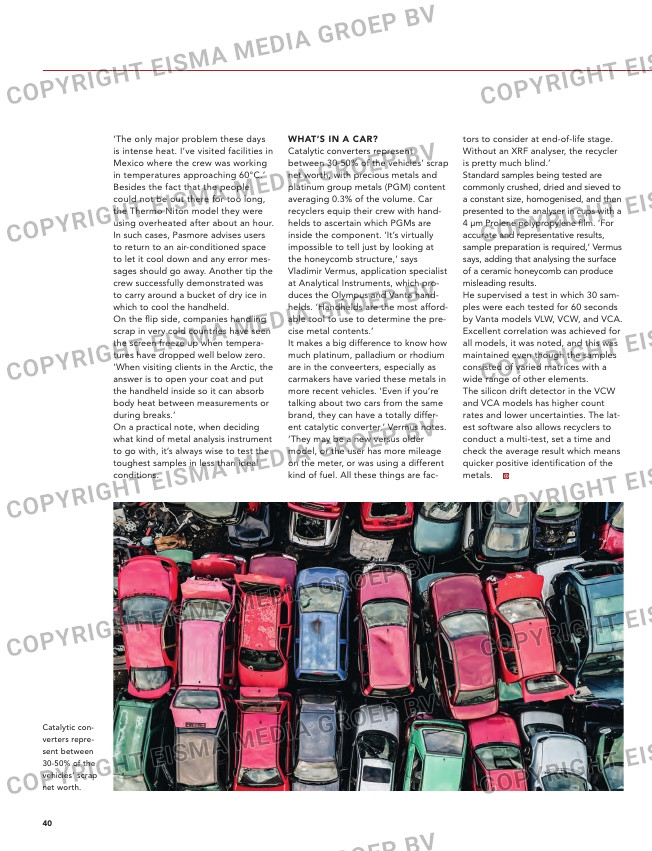 tors to consider at end-of-life stage.
Without an XRF analyser, the recycler
is pretty much blind.’
Standard samples being tested are
commonly crushed, dried and sieved to
a constant size, homogenised, and then
presented to the analyser in cups with a
4 μm Prolene polypropylene film. ‘For
accurate and representative results,
sample preparation is required,’ Vermus
says, adding that analysing the surface
of a ceramic honeycomb can produce
misleading results.
He supervised a test in which 30 sam-
ples were each tested for 60 seconds
by Vanta models VLW, VCW, and VCA.
Excellent correlation was achieved for
all models, it was noted, and this was
maintained even though the samples
consisted of varied matrices with a
wide range of other elements.
The silicon drift detector in the VCW
and VCA models has higher count
rates and lower uncertainties. The lat-
est software also allows recyclers to
conduct a multi-test, set a time and
check the average result which means
quicker positive identification of the
metals.

Catalytic con-
verters repre-
sent between
30-50% of the
vehicles’ scrap
net worth.

‘The only major problem these days
is intense heat. I’ve visited facilities in
Mexico where the crew was working
in temperatures approaching 60°C.’
Besides the fact that the people
could not be out there for too long,
the Thermo Niton model they were
using overheated after about an hour.
In such cases, Pasmore advises users
to return to an air-conditioned space
to let it cool down and any error mes-
sages should go away. Another tip the
crew successfully demonstrated was
to carry around a bucket of dry ice in
which to cool the handheld.
On the flip side, companies handling
scrap in very cold countries have seen
the screen freeze up when tempera-
tures have dropped well below zero.
‘When visiting clients in the Arctic, the
answer is to open your coat and put
the handheld inside so it can absorb
body heat between measurements or
during breaks.’
On a practical note, when deciding
what kind of metal analysis instrument
to go with, it’s always wise to test the
toughest samples in less than ideal
conditions.

WHAT’S IN A CAR?
Catalytic converters represent
between 30-50% of the vehicles’ scrap
net worth, with precious metals and
platinum group metals (PGM) content
averaging 0.3% of the volume. Car
recyclers equip their crew with hand-
helds to ascertain which PGMs are
inside the component. ‘It’s virtually
impossible to tell just by looking at
the honeycomb structure,’ says
Vladimir Vermus, application specialist
at Analytical Instruments, which pro-
duces the Olympus and Vanta hand-
helds. ‘Handhelds are the most afford-
able tool to use to determine the pre-
cise metal contents.’
It makes a big difference to know how
much platinum, palladium or rhodium
are in the conveerters, especially as
carmakers have varied these metals in
more recent vehicles. ‘Even if you’re
talking about two cars from the same
brand, they can have a totally differ-
ent catalytic converter,’ Vermus notes.
‘They may be a new versus older
model, or the user has more mileage
on the meter, or was using a different
kind of fuel. All these things are fac-