Subscribe
24 PRE-SHREDDERS ARE A VITAL TOOL WHOSE TIME IS NOW Pre-shredders tear materials into smaller pieces that can then be shredded more easily. In the early days of pre- shredding, there were several different designs, including machines calle...
Read the entire page 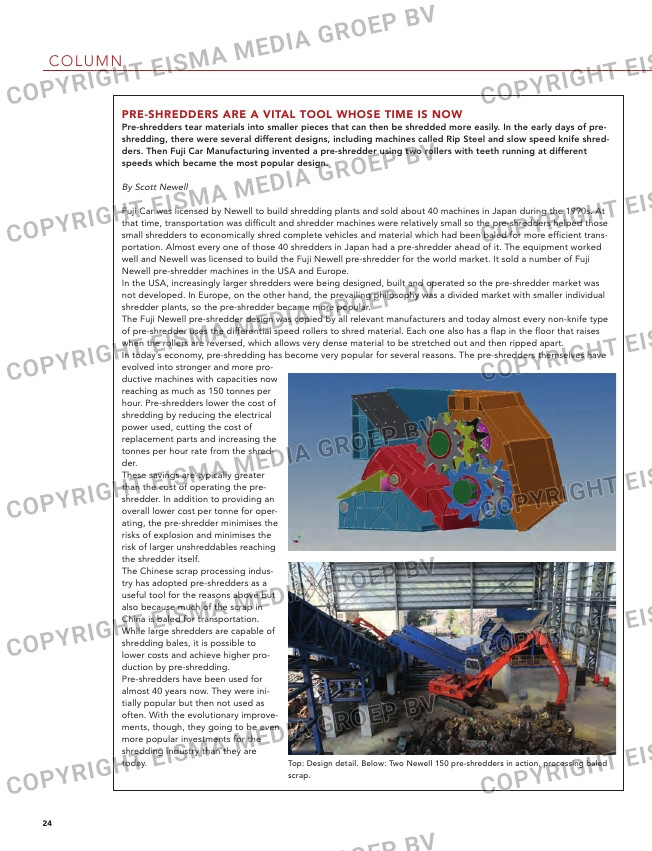 PRE-SHREDDERS ARE A VITAL TOOL WHOSE TIME IS NOW
Pre-shredders tear materials into smaller pieces that can then be shredded more easily. In the early days of pre-
shredding, there were several different designs, including machines called Rip Steel and slow speed knife shred-
ders. Then Fuji Car Manufacturing invented a pre-shredder using two rollers with teeth running at different
speeds which became the most popular design.

Fuji Car was licensed by Newell to build shredding plants and sold about 40 machines in Japan during the 1990s. At
that time, transportation was difficult and shredder machines were relatively small so the pre-shredders helped those
small shredders to economically shred complete vehicles and material which had been baled for more efficient trans-
portation. Almost every one of those 40 shredders in Japan had a pre-shredder ahead of it. The equipment worked
well and Newell was licensed to build the Fuji Newell pre-shredder for the world market. It sold a number of Fuji
Newell pre-shredder machines in the USA and Europe.
In the USA, increasingly larger shredders were being designed, built and operated so the pre-shredder market was
not developed. In Europe, on the other hand, the prevailing philosophy was a divided market with smaller individual
shredder plants, so the pre-shredder became more popular.
The Fuji Newell pre-shredder design was copied by all relevant manufacturers and today almost every non-knife type
of pre-shredder uses the differential speed rollers to shred material. Each one also has a flap in the floor that raises
when the rollers are reversed, which allows very dense material to be stretched out and then ripped apart.
In today’s economy, pre-shredding has become very popular for several reasons. The pre-shredders themselves have
evolved into stronger and more pro-
ductive machines with capacities now
reaching as much as 150 tonnes per
hour. Pre-shredders lower the cost of
shredding by reducing the electrical
power used, cutting the cost of
replacement parts and increasing the
tonnes per hour rate from the shred-
der.
These savings are typically greater
than the cost of operating the pre-
shredder. In addition to providing an
overall lower cost per tonne for oper-
ating, the pre-shredder minimises the
risks of explosion and minimises the
risk of larger unshreddables reaching
the shredder itself.
The Chinese scrap processing indus-
try has adopted pre-shredders as a
useful tool for the reasons above but
also because much of the scrap in
China is baled for transportation.
While large shredders are capable of
shredding bales, it is possible to
lower costs and achieve higher pro-
duction by pre-shredding.
Pre-shredders have been used for
almost 40 years now. They were ini-
tially popular but then not used as
often. With the evolutionary improve-
ments, though, they going to be even
more popular investments for the
shredding industry than they are
today.