Subscribe
12 METSO OUTOTEC DIVESTS METAL RECYCLING DIVISION Metso Outotec has signed an agreement to sell its metal recycling business line, including the Lindemann brand, to Mimir, an investment company based in Stockholm, Sweden. ‘We are deli...
Read the entire page 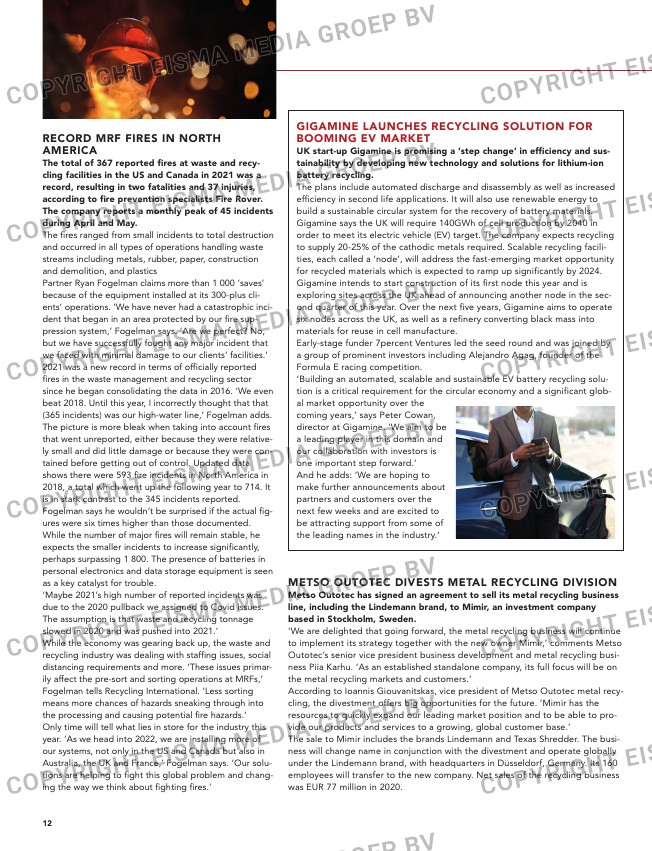 METSO OUTOTEC DIVESTS METAL RECYCLING DIVISION
Metso Outotec has signed an agreement to sell its metal recycling business
line, including the Lindemann brand, to Mimir, an investment company
based in Stockholm, Sweden.
‘We are delighted that going forward, the metal recycling business will continue
to implement its strategy together with the new owner Mimir,’ comments Metso
Outotec’s senior vice president business development and metal recycling busi-
ness Piia Karhu. ‘As an established standalone company, its full focus will be on
the metal recycling markets and customers.’
According to Ioannis Giouvanitskas, vice president of Metso Outotec metal recy-
cling, the divestment offers big opportunities for the future. ‘Mimir has the
resources to quickly expand our leading market position and to be able to pro-
vide our products and services to a growing, global customer base.’
The sale to Mimir includes the brands Lindemann and Texas Shredder. The busi-
ness will change name in conjunction with the divestment and operate globally
under the Lindemann brand, with headquarters in Düsseldorf, Germany. Its 160
employees will transfer to the new company. Net sales of the recycling business
was EUR 77 million in 2020.

RECORD MRF FIRES IN NORTH
AMERICA
The total of 367 reported fires at waste and recy-
cling facilities in the US and Canada in 2021 was a
record, resulting in two fatalities and 37 injuries,
according to fire prevention specialists Fire Rover.
The company reports a monthly peak of 45 incidents
during April and May.
The fires ranged from small incidents to total destruction
and occurred in all types of operations handling waste
streams including metals, rubber, paper, construction
and demolition, and plastics
Partner Ryan Fogelman claims more than 1 000 ‘saves’
because of the equipment installed at its 300-plus cli-
ents’ operations. ‘We have never had a catastrophic inci-
dent that began in an area protected by our fire sup-
pression system,’ Fogelman says. ‘Are we perfect? No,
but we have successfully fought any major incident that
we faced with minimal damage to our clients’ facilities.’
2021 was a new record in terms of officially reported
fires in the waste management and recycling sector
since he began consolidating the data in 2016. ‘We even
beat 2018. Until this year, I incorrectly thought that that
(365 incidents) was our high-water line,’ Fogelman adds.
The picture is more bleak when taking into account fires
that went unreported, either because they were relative-
ly small and did little damage or because they were con-
tained before getting out of control. Updated data
shows there were 593 fire incidents in North America in
2018, a total which went up the following year to 714. It
is in stark contrast to the 345 incidents reported.
Fogelman says he wouldn’t be surprised if the actual fig-
ures were six times higher than those documented.
While the number of major fires will remain stable, he
expects the smaller incidents to increase significantly,
perhaps surpassing 1 800. The presence of batteries in
personal electronics and data storage equipment is seen
as a key catalyst for trouble.
‘Maybe 2021’s high number of reported incidents was
due to the 2020 pullback we assigned to Covid issues.
The assumption is that waste and recycling tonnage
slowed in 2020 and was pushed into 2021.’
While the economy was gearing back up, the waste and
recycling industry was dealing with staffing issues, social
distancing requirements and more. ‘These issues primar-
ily affect the pre-sort and sorting operations at MRFs,’
Fogelman tells Recycling International. ‘Less sorting
means more chances of hazards sneaking through into
the processing and causing potential fire hazards.’
Only time will tell what lies in store for the industry this
year. ‘As we head into 2022, we are installing more of
our systems, not only in the US and Canada but also in
Australia, the UK and France,’ Fogelman says. ‘Our solu-
tions are helping to fight this global problem and chang-
ing the way we think about fighting fires.’

SOUTH ASIAN BEACHES CONTINUE TO DOMI-
NATE SHIP BREAKING
A total of 763 ocean-going commercial ships and floating off-
shore units were sold to scrap yards in 2021, the NGO
Shipbreaking Platform reports.
The watchdog says 583 of the largest tankers, bulkers, floating
platforms, cargo- and passenger ships ended up on the beaches of
Bangladesh, India and Pakistan with high numbers of death and
injuries among the scrap workers.
Organisation founder Ingvild Jenssen says ship owners have long
been aware of the lack of capacity to safely handle the many toxic
materials on board vessels at shipbreaking yards. ‘Yet, with the
help of scrap dealers, the vast majority choose to scrap their end-
of-life fleet in South Asia as that is where they can make the high-
est profits.’
Based on official 2021 data, at least 14 workers lost their lives
breaking vessels on the beach of Chattogram, Bangladesh and
another 34 were severely injured. Local sources also reported two
deaths in Alang, India, and two more in Gadani, Pakistan. Jenssen
believes the figures are higher, claiming the shipbreaking industry
is not known for its transparency.
She points out that some of the accidents took place during the
dismantling of vessels owned by well-known shipping companies,
such as Berge Bulk, Nathalin, Polaris Shipping and Winson Oil.
‘We have launched a fundraising campaign to help the victims of
unregulated shipbreaking in collaboration with new local partners
in Bangladesh,’ says Sara Costa, project officer at the NGO
Shipbreaking Platform. ‘Many workers suffer from cancer and other
occupational diseases due to the long-term exposure to asbestos
and other hazardous substances. We hope the campaign will
encourage people and companies to support us so that that prop-
er medical treatment can be provided.’
Looking to the future, Jenssen is cautiously optimistic. ‘As scrap-
ping practices over the past ten years have shown, the vast majori-
ty of ship owners will continue to ignore the conditions under
which their vessels are broken as long as it provides them with
extra profits.’
Therefore, legislators need to find ways of closing the gap, she
maintains, suggesting a return scheme for ships funded by fees for
recycling collected during the operational life of a vessel. The plat-
form founder insists companies are held criminally liable for the
damage they cause to local communities and the coastal environ-
ment in South Asia. Investors are also seen as having a key role to
play by broadening their ‘green
investment’ to back facilities that
offer infrastructure fit for a heavy
and hazardous industry.
‘From our side, I can say that we
intend to provide more visibility to
solutions, including technical inno-
vations for recycling operations, and
insight into the circular material flow
in the global shipping industry,’
Jenssen says. ‘For example, there is
scope for real improvements at the
design and building phase of ships
to include recycling considerations.’

GIGAMINE LAUNCHES RECYCLING SOLUTION FOR
BOOMING EV MARKET
UK start-up Gigamine is promising a ‘step change’ in efficiency and sus-
tainability by developing new technology and solutions for lithium-ion
battery recycling.
The plans include automated discharge and disassembly as well as increased
efficiency in second life applications. It will also use renewable energy to
build a sustainable circular system for the recovery of battery materials.
Gigamine says the UK will require 140GWh of cell production by 2040 in
order to meet its electric vehicle (EV) target. The company expects recycling
to supply 20-25% of the cathodic metals required. Scalable recycling facili-
ties, each called a ‘node’, will address the fast-emerging market opportunity
for recycled materials which is expected to ramp up significantly by 2024.
Gigamine intends to start construction of its first node this year and is
exploring sites across the UK ahead of announcing another node in the sec-
ond quarter of this year. Over the next five years, Gigamine aims to operate
six nodes across the UK, as well as a refinery converting black mass into
materials for reuse in cell manufacture.
Early-stage funder 7percent Ventures led the seed round and was joined by
a group of prominent investors including Alejandro Agag, founder of the
Formula E racing competition.
‘Building an automated, scalable and sustainable EV battery recycling solu-
tion is a critical requirement for the circular economy and a significant glob-
al market opportunity over the
coming years,’ says Peter Cowan,
director at Gigamine. ‘We aim to be
a leading player in this domain and
our collaboration with investors is
one important step forward.’
And he adds: ‘We are hoping to
make further announcements about
partners and customers over the
next few weeks and are excited to
be attracting support from some of
the leading names in the industry.’