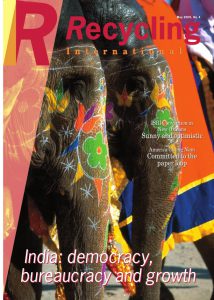 Subscribe
On April 12, three-month LME nickel reached US$ 16 255 and then promptly fell US$ 1005 the following day. True to current form, however, the price then gradually improved to beyond US$ 16 000 at the end of April. Climbing then falling sto...
Read the entire page 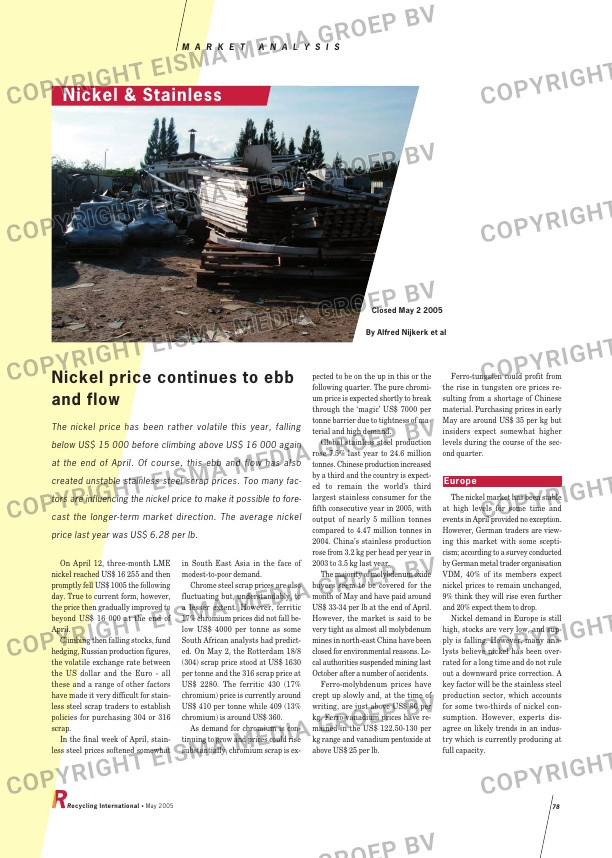 On April 12, three-month LME
nickel reached US$ 16 255 and then
promptly fell US$ 1005 the following
day. True to current form, however,
the price then gradually improved to
beyond US$ 16 000 at the end of
April.

Climbing then falling stocks, fund
hedging, Russian production figures,
the volatile exchange rate between
the US dollar and the Euro – all
these and a range of other factors
have made it very difficult for stain-
less steel scrap traders to establish
policies for purchasing 304 or 316
scrap.

in South East Asia in the face of
modest-to-poor demand.

As demand for chromium is con-
tinuing to grow and prices could rise
substantially, chromium scrap is ex-

pected to be on the up in this or the
following quarter. The pure chromi-
um price is expected shortly to break
through the ‘magic’ US$ 7000 per
tonne barrier due to tightness of ma-
terial and high demand.

Global stainless steel production
rose 7.5% last year to 24.6 million
tonnes. Chinese production increased
by a third and the country is expect-
ed to remain the world’s third
largest stainless consumer for the
fifth consecutive year in 2005, with
output of nearly 5 million tonnes
compared to 4.47 million tonnes in
2004. China’s stainless production
rose from 3.2 kg per head per year in
2003 to 3.5 kg last year.

The majority of molybdenum oxide
buyers seem to be covered for the
month of May and have paid around
US$ 33-34 per lb at the end of April.
However, the market is said to be
very tight as almost all molybdenum
mines in north-east China have been
closed for environmental reasons. Lo-
cal authorities suspended mining last
October after a number of accidents.

Ferro-molybdenum prices have
crept up slowly and, at the time of
writing, are just above US$ 80 per
kg. Ferro-vanadium prices have re-
mained in the US$ 122.50-130 per
kg range and vanadium pentoxide at
above US$ 25 per lb.

Ferro-tungsten could profit from
the rise in tungsten ore prices re-
sulting from a shortage of Chinese
material. Purchasing prices in early
May are around US$ 35 per kg but
insiders expect somewhat higher
levels during the course of the sec-
ond quarter.

The nickel market has been stable
at high levels for some time and
events in April provided no exception.
However, German traders are view-
ing this market with some scepti-
cism; according to a survey conducted
by German metal trader organisation
VDM, 40% of its members expect
nickel prices to remain unchanged,
9% think they will rise even further
and 20% expect them to drop.

Nickel demand in Europe is still
high, stocks are very low, and sup-
ply is falling. However, many ana-
lysts believe nickel has been over-
rated for a long time and do not rule
out a downward price correction. A
key factor will be the stainless steel
production sector, which accounts
for some two-thirds of nickel con-
sumption. However, experts dis-
agree on likely trends in an indus-
try which is currently producing at
full capacity.

The nickel price has been rather volatile this year, falling

at the end of April. Of course, this ebb and flow has also