Subscribe
Cablofer Bex of Switzerland runs a multi-functional centre for all sorts of operations centred around the collection, treatment and upgrading of wastes containing metal scrap. Or as the company likes to say: ‘We mine secondary raw materi...
Read the entire page 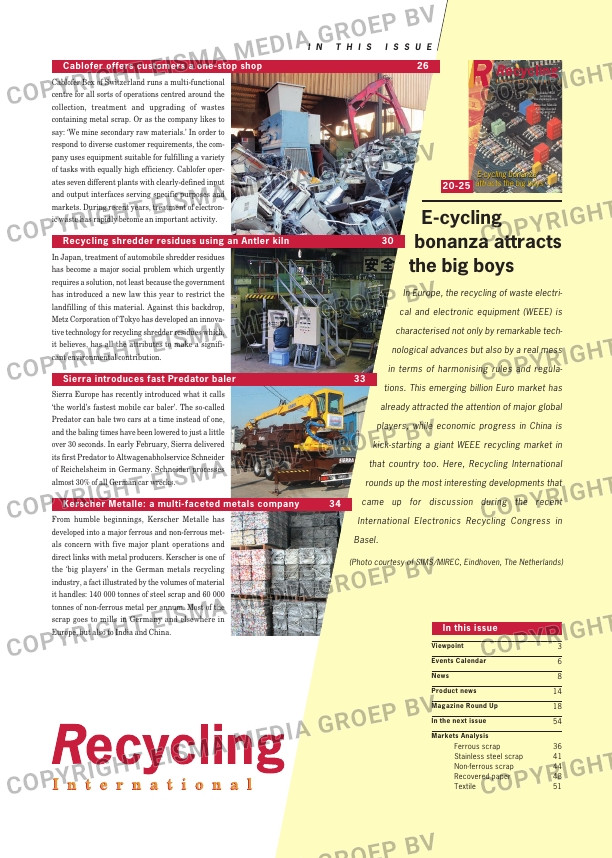 Cablofer Bex of Switzerland runs a multi-functional
centre for all sorts of operations centred around the
collection, treatment and upgrading of wastes
containing metal scrap. Or as the company likes to
say: ‘We mine secondary raw materials.’ In order to
respond to diverse customer requirements, the com-
pany uses equipment suitable for fulfilling a variety
of tasks with equally high efficiency. Cablofer oper-
ates seven different plants with clearly-defined input
and output interfaces serving specific purposes and
markets. During recent years, treatment of electron-
ic waste has rapidly become an important activity.

Sierra Europe has recently introduced what it calls
‘the world’s fastest mobile car baler’. The so-called
Predator can bale two cars at a time instead of one,
and the baling times have been lowered to just a little
over 30 seconds. In early February, Sierra delivered
its first Predator to Altwagenabholservice Schneider
of Reichelsheim in Germany. Schneider processes
almost 30% of all German car wrecks.

In Europe, the recycling of waste electri-

cal and electronic equipment (WEEE) is

characterised not only by remarkable tech-

nological advances but also by a real mess

players, while economic progress in China is

that country too. Here, Recycling International

rounds up the most interesting developments that

came up for discussion during the recent

In the next issue 54

In Japan, treatment of automobile shredder residues
has become a major social problem which urgently
requires a solution, not least because the government
has introduced a new law this year to restrict the
landfilling of this material. Against this backdrop,
Metz Corporation of Tokyo has developed an innova-
tive technology for recycling shredder residues which,
it believes, has all the attributes to make a signifi-
cant environmental contribution.

From humble beginnings, Kerscher Metalle has
developed into a major ferrous and non-ferrous met-
als concern with five major plant operations and
direct links with metal producers. Kerscher is one of
the ‘big players’ in the German metals recycling
industry, a fact illustrated by the volumes of material
it handles: 140 000 tonnes of steel scrap and 60 000
tonnes of non-ferrous metal per annum. Most of the
scrap goes to mills in Germany and elsewhere in
Europe, but also to India and China.