Subscribe
Europe Dearth of lower-grade material Incoming lower-grade volumes have been very low so far this year and European mills put their prices back up in February because of a dearth of material. Demand from a variety of Asian countries has b...
Read the entire page 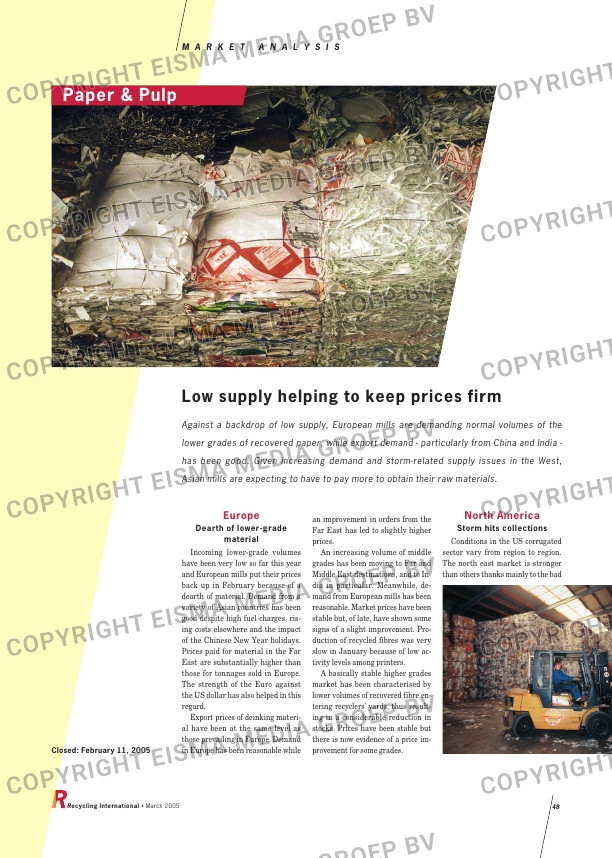 Incoming lower-grade volumes
have been very low so far this year
and European mills put their prices
back up in February because of a
dearth of material. Demand from a
variety of Asian countries has been
good despite high fuel charges, ris-
ing costs elsewhere and the impact
of the Chinese New Year holidays.
Prices paid for material in the Far
East are substantially higher than
those for tonnages sold in Europe.
The strength of the Euro against
the US dollar has also helped in this
regard.

Export prices of deinking materi-
al have been at the same level as
those prevailing in Europe. Demand
in Europe has been reasonable while

an improvement in orders from the
Far East has led to slightly higher
prices.

An increasing volume of middle
grades has been moving to Far and
Middle East destinations, and to In-
dia in particular. Meanwhile, de-
mand from European mills has been
reasonable. Market prices have been
stable but, of late, have shown some
signs of a slight improvement. Pro-
duction of recycled fibres was very
slow in January because of low ac-
tivity levels among printers.

A basically stable higher grades
market has been characterised by
lower volumes of recovered fibre en-
tering recyclers’ yards, thus result-
ing in a considerable reduction in
stocks. Prices have been stable but
there is now evidence of a price im-
provement for some grades.

Conditions in the US corrugated
sector vary from region to region.
The north east market is stronger
than others thanks mainly to the bad

Against a backdrop of low supply, European mills are demanding normal volumes of the

lower grades of recovered paper, while export demand – particularly from China and India –

has been good. Given increasing demand and storm-related supply issues in the West,

Asian mills are expecting to have to pay more to obtain their raw materials.