Subscribe
‘An injection of new car baler technology was needed in order to reach higher production capacities using an existing baler,’ according to Sierra Europe’s Managing Director Marco Garuti. ‘Many of our customers who either operate t...
Read the entire page 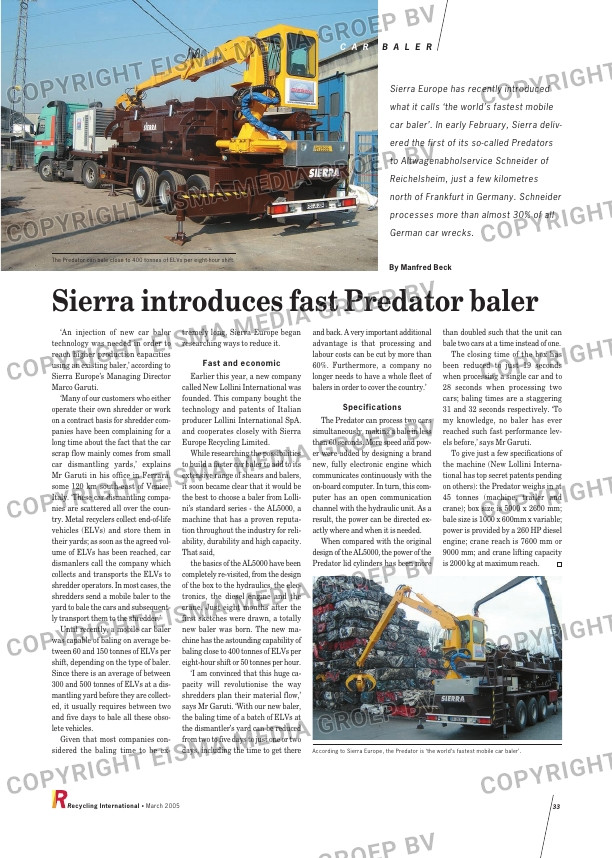 ‘Many of our customers who either
operate their own shredder or work
on a contract basis for shredder com-
panies have been complaining for a
long time about the fact that the car
scrap flow mainly comes from small
car dismantling yards,’ explains
Mr Garuti in his office in Ferrara,
some 120 km south-east of Venice,
Italy. ‘These car dismantling compa-
nies are scattered all over the coun-
try. Metal recyclers collect end-of-life
vehicles (ELVs) and store them in
their yards; as soon as the agreed vol-
ume of ELVs has been reached, car
dismanlers call the company which
collects and transports the ELVs to
shredder operators. In most cases, the
shredders send a mobile baler to the
yard to bale the cars and subsequent-
ly transport them to the shredder.’

Until recently, a mobile car baler
was capable of baling on average be-
tween 60 and 150 tonnes of ELVs per
shift, depending on the type of baler.
Since there is an average of between
300 and 500 tonnes of ELVs at a dis-
mantling yard before they are collect-
ed, it usually requires between two
and five days to bale all these obso-
lete vehicles.

While researching the possibilities
to build a faster car baler to add to its
extensive range of shears and balers,
it soon became clear that it would be
the best to choose a baler from Lolli-
ni’s standard series – the AL5000, a
machine that has a proven reputa-
tion throughout the industry for reli-
ability, durability and high capacity.
That said,

the basics of the AL5000 have been
completely re-visited, from the design
of the box to the hydraulics, the elec-
tronics, the diesel engine and the
crane. Just eight months after the
first sketches were drawn, a totally
new baler was born. The new ma-
chine has the astounding capability of
baling close to 400 tonnes of ELVs per
eight-hour shift or 50 tonnes per hour.

‘I am convinced that this huge ca-
pacity will revolutionise the way
shredders plan their material flow,’
says Mr Garuti. ‘With our new baler,
the baling time of a batch of ELVs at
the dismantler’s yard can be reduced
from two to five days to just one or two
days, including the time to get there

and back. A very important additional
advantage is that processing and
labour costs can be cut by more than
60%. Furthermore, a company no
longer needs to have a whole fleet of
balers in order to cover the country.’

The Predator can process two cars
simultaneously, making a bale in less
than 60 seconds. More speed and pow-
er were added by designing a brand
new, fully electronic engine which
communicates continuously with the
on-board computer. In turn, this com-
puter has an open communication
channel with the hydraulic unit. As a
result, the power can be directed ex-
actly where and when it is needed.

When compared with the original
design of the AL5000, the power of the
Predator lid cylinders has been more

than doubled such that the unit can
bale two cars at a time instead of one.

The closing time of the box has
been reduced to just 19 seconds
when processing a single car and to
28 seconds when processing two
cars; baling times are a staggering
31 and 32 seconds respectively. ‘To
my knowledge, no baler has ever
reached such fast performance lev-
els before,’ says Mr Garuti.

what it calls ‘the world’s fastest mobile

ered the first of its so-called Predators

north of Frankfurt in Germany. Schneider

processes more than almost 30% of all

The Predator can bale close to 400 tonnes of ELVs per eight-hour shift.
By Manfred Beck

According to Sierra Europe, the Predator is ‘the world’s fastest mobile car baler’.