Subscribe
Consequently, the whole sector is experiencing a wave of mergers and acquisitions as enterprises attempt to gain sufficient substance to be deemed an acceptable partner for these heavyweight cus- tomers. Remondis itself has acquired the for...
Read the entire page 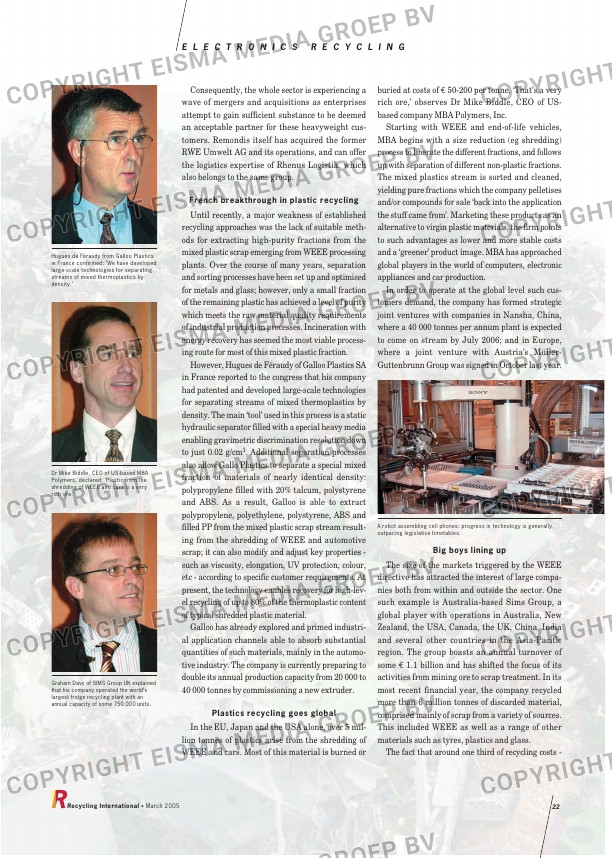 Consequently, the whole sector is experiencing a
wave of mergers and acquisitions as enterprises
attempt to gain sufficient substance to be deemed
an acceptable partner for these heavyweight cus-
tomers. Remondis itself has acquired the former
RWE Umwelt AG and its operations, and can offer
the logistics expertise of Rhenus Logistik, which
also belongs to the same group.

Until recently, a major weakness of established
recycling approaches was the lack of suitable meth-
ods for extracting high-purity fractions from the
mixed plastic scrap emerging from WEEE processing
plants. Over the course of many years, separation
and sorting processes have been set up and optimised
for metals and glass; however, only a small fraction
of the remaining plastic has achieved a level of purity
which meets the raw material quality requirements
of industrial production processes. Incineration with
energy recovery has seemed the most viable process-
ing route for most of this mixed plastic fraction.

However, Hugues de Féraudy of Galloo Plastics SA
in France reported to the congress that his company
had patented and developed large-scale technologies
for separating streams of mixed thermoplastics by
density. The main ‘tool’ used in this process is a static
hydraulic separator filled with a special heavy media
enabling gravimetric discrimination resolution down
to just 0.02 g/cm3. Additional separation processes
also allow Gallo Plastics to separate a special mixed
fraction of materials of nearly identical density:
polypropylene filled with 20% talcum, polystyrene
and ABS. As a result, Galloo is able to extract
polypropylene, polyethylene, polystyrene, ABS and
filled PP from the mixed plastic scrap stream result-
ing from the shredding of WEEE and automotive
scrap; it can also modify and adjust key properties –
such as viscosity, elongation, UV protection, colour,
etc – according to specific customer requirements. At
present, the technology enables recovery for high-lev-
el recycling of up to 80% of the thermoplastic content
of typical shredded plastic material.

Galloo has already explored and primed industri-
al application channels able to absorb substantial
quantities of such materials, mainly in the automo-
tive industry. The company is currently preparing to
double its annual production capacity from 20 000 to
40 000 tonnes by commissioning a new extruder.

In the EU, Japan and the USA alone, over 5 mil-
lion tonnes of plastics arise from the shredding of
WEEE and cars. Most of this material is burned or

Starting with WEEE and end-of-life vehicles,
MBA begins with a size reduction (eg shredding)
process to liberate the different fractions, and follows
up with separation of different non-plastic fractions.
The mixed plastics stream is sorted and cleaned,
yielding pure fractions which the company pelletises
and/or compounds for sale ‘back into the application
the stuff came from’. Marketing these products as an
alternative to virgin plastic materials, the firm points
to such advantages as lower and more stable costs
and a ‘greener’ product image. MBA has approached
global players in the world of computers, electronic
appliances and car production.

In order to operate at the global level such cus-
tomers demand, the company has formed strategic
joint ventures with companies in Nansha, China,
where a 40 000 tonnes per annum plant is expected
to come on stream by July 2006; and in Europe,
where a joint venture with Austria’s Müller-
Guttenbrunn Group was signed in October last year.

The size of the markets triggered by the WEEE
directive has attracted the interest of large compa-
nies both from within and outside the sector. One
such example is Australia-based Sims Group, a
global player with operations in Australia, New
Zealand, the USA, Canada, the UK, China, India
and several other countries in the Asia-Pacific
region. The group boasts an annual turnover of
some € 1.1 billion and has shifted the focus of its
activities from mining ore to scrap treatment. In its
most recent financial year, the company recycled
more than 6 million tonnes of discarded material,
comprised mainly of scrap from a variety of sources.
This included WEEE as well as a range of other
materials such as tyres, plastics and glass.

The fact that around one third of recycling costs –

Hugues de Féraudy from Galloo Plastics
in France confirmed: ‘We have developed
large-scale technologies for separating
streams of mixed thermoplastics by
density.’

Dr Mike Biddle, CEO of US-based MBA
Polymers, declared: ‘Plastic from the
shredding of WEEE and cars is a very
rich ore.’

Graham Davy of SIMS Group UK explained
that his company operated the world’s
largest fridge recycling plant with an
annual capacity of some 750 000 units.