Subscribe
tion of the WEEE directive; however, the failure of the majority of EU member states to meet last year’s August 13 deadline for publishing national legislation has left the industry in limbo. Key con- cepts such as ‘import’ or ‘prod...
Read the entire page 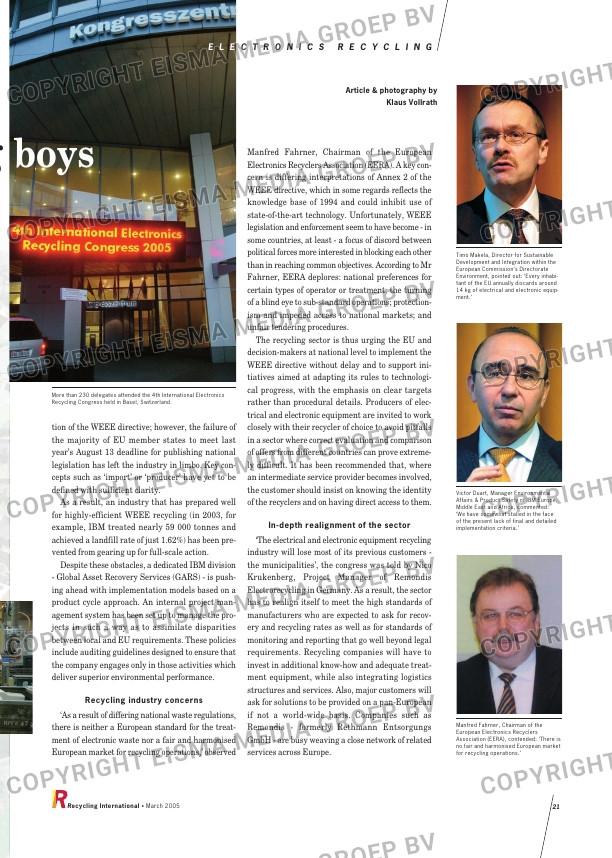 tion of the WEEE directive; however, the failure of
the majority of EU member states to meet last
year’s August 13 deadline for publishing national
legislation has left the industry in limbo. Key con-
cepts such as ‘import’ or ‘producer’ have yet to be
defined with sufficient clarity.

As a result, an industry that has prepared well
for highly-efficient WEEE recycling (in 2003, for
example, IBM treated nearly 59 000 tonnes and
achieved a landfill rate of just 1.62%) has been pre-
vented from gearing up for full-scale action.

Despite these obstacles, a dedicated IBM division
– Global Asset Recovery Services (GARS) – is push-
ing ahead with implementation models based on a
product cycle approach. An internal project man-
agement system has been set up to manage the pro-
jects in such a way as to assimilate disparities
between local and EU requirements. These policies
include auditing guidelines designed to ensure that
the company engages only in those activities which
deliver superior environmental performance.

‘As a result of differing national waste regulations,
there is neither a European standard for the treat-
ment of electronic waste nor a fair and harmonised
European market for recycling operations,’ observed

Manfred Fahrner, Chairman of the European
Electronics Recyclers Association (EERA). A key con-
cern is differing interpretations of Annex 2 of the
WEEE directive, which in some regards reflects the
knowledge base of 1994 and could inhibit use of
state-of-the-art technology. Unfortunately, WEEE
legislation and enforcement seem to have become – in
some countries, at least – a focus of discord between
political forces more interested in blocking each other
than in reaching common objectives. According to Mr
Fahrner, EERA deplores: national preferences for
certain types of operator or treatment; the turning
of a blind eye to sub-standard operations; protection-
ism and impeded access to national markets; and
unfair tendering procedures.

The recycling sector is thus urging the EU and
decision-makers at national level to implement the
WEEE directive without delay and to support ini-
tiatives aimed at adapting its rules to technologi-
cal progress, with the emphasis on clear targets
rather than procedural details. Producers of elec-
trical and electronic equipment are invited to work
closely with their recycler of choice to avoid pitfalls
in a sector where correct evaluation and comparison
of offers from different countries can prove extreme-
ly difficult. It has been recommended that, where
an intermediate service provider becomes involved,
the customer should insist on knowing the identity
of the recyclers and on having direct access to them.

In-depth realignment of the sector

‘The electrical and electronic equipment recycling
industry will lose most of its previous customers –
the municipalities’, the congress was told by Nico
Krukenberg, Project Manager of Remondis
Electrorecycling in Germany. As a result, the sector
has to realign itself to meet the high standards of
manufacturers who are expected to ask for recov-
ery and recycling rates as well as for standards of
monitoring and reporting that go well beyond legal
requirements. Recycling companies will have to
invest in additional know-how and adequate treat-
ment equipment, while also integrating logistics
structures and services. Also, major customers will
ask for solutions to be provided on a pan-European
if not a world-wide basis. Companies such as
Remondis – formerly Rethmann Entsorgungs
GmbH – are busy weaving a close network of related
services across Europe.

Timo Makela, Director for Sustainable
Development and Integration within the
European Commission’s Directorate
Environment, pointed out: ‘Every inhabi-
tant of the EU annually discards around
14 kg of electrical and electronic equip-
ment.’

Victor Duart, Manager Environmental
Affairs & Product Safety of IBM Europe,
Middle East and Africa, commented:
‘We have somewhat stalled in the face
of the present lack of final and detailed
implementation criteria.’

Manfred Fahrner, Chairman of the
European Electronics Recyclers
Association (EERA), contended: ‘There is
no fair and harmonised European market
for recycling operations.’