Subscribe
20 result of a lengthy legislative process shaped by polit- ical rivalries and by strong influence from pressure groups showing sometimes limited regard for the needs of modern industrial production processes. Individual EU countries have ...
Read the entire page 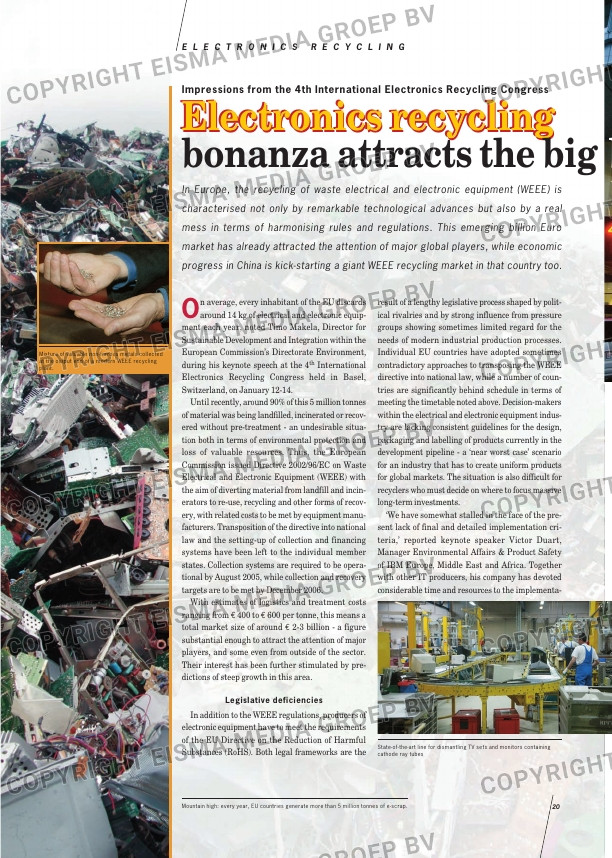 result of a lengthy legislative process shaped by polit-
ical rivalries and by strong influence from pressure
groups showing sometimes limited regard for the
needs of modern industrial production processes.
Individual EU countries have adopted sometimes
contradictory approaches to transposing the WEEE
directive into national law, while a number of coun-
tries are significantly behind schedule in terms of
meeting the timetable noted above. Decision-makers
within the electrical and electronic equipment indus-
try are lacking consistent guidelines for the design,
packaging and labelling of products currently in the
development pipeline – a ‘near worst case’ scenario
for an industry that has to create uniform products
for global markets. The situation is also difficult for
recyclers who must decide on where to focus massive
long-term investments.

‘We have somewhat stalled in the face of the pre-
sent lack of final and detailed implementation cri-
teria,’ reported keynote speaker Victor Duart,
Manager Environmental Affairs & Product Safety
of IBM Europe, Middle East and Africa. Together
with other IT producers, his company has devoted
considerable time and resources to the implementa-

On average, every inhabitant of the EU discardsaround 14 kg of electrical and electronic equip-
ment each year, noted Timo Makela, Director for
Sustainable Development and Integration within the
European Commission’s Directorate Environment,
during his keynote speech at the 4th International
Electronics Recycling Congress held in Basel,
Switzerland, on January 12-14.

Until recently, around 90% of this 5 million tonnes
of material was being landfilled, incinerated or recov-
ered without pre-treatment – an undesirable situa-
tion both in terms of environmental protection and
loss of valuable resources. Thus, the European
Commission issued Directive 2002/96/EC on Waste
Electrical and Electronic Equipment (WEEE) with
the aim of diverting material from landfill and incin-
erators to re-use, recycling and other forms of recov-
ery, with related costs to be met by equipment manu-
facturers. Transposition of the directive into national
law and the setting-up of collection and financing
systems have been left to the individual member
states. Collection systems are required to be opera-
tional by August 2005, while collection and recovery
targets are to be met by December 2006.

With estimates of logistics and treatment costs
ranging from € 400 to € 600 per tonne, this means a
total market size of around € 2-3 billion – a figure
substantial enough to attract the attention of major
players, and some even from outside of the sector.
Their interest has been further stimulated by pre-
dictions of steep growth in this area.

In addition to the WEEE regulations, producers of
electronic equipment have to meet the requirements
of the EU Directive on the Reduction of Harmful
Substances (RoHS). Both legal frameworks are the

In Europe, the recycling of waste electrical and electronic equipment (WEEE) is

mess in terms of harmonising rules and regulations. This emerging billion Euro

market has already attracted the attention of major global players, while economic

progress in China is kick-starting a giant WEEE recycling market in that country too.

bonanza attracts the big b

Mixture of valuable non-ferrous metals collected
at the output end of a modern WEEE recycling
plant.