Subscribe
Scrap exports from the USA to China faced only mini- mal regulation by the Chinese government until 2004 when China’s General Administration of Quality Supervision Inspection and Quarantine (AQSIQ) announced plans to impose a licensing re...
Read the entire page 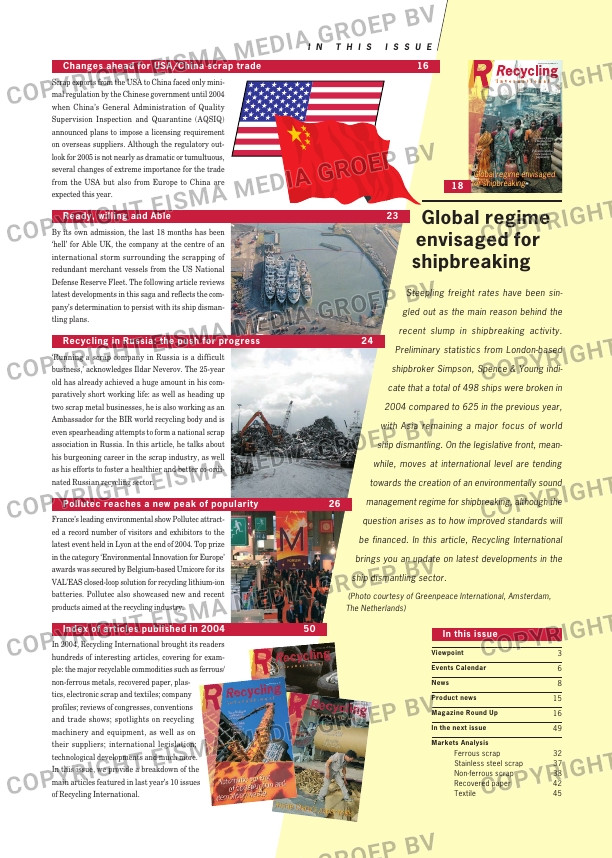 Scrap exports from the USA to China faced only mini-
mal regulation by the Chinese government until 2004
when China’s General Administration of Quality
Supervision Inspection and Quarantine (AQSIQ)
announced plans to impose a licensing requirement
on overseas suppliers. Although the regulatory out-
look for 2005 is not nearly as dramatic or tumultuous,
several changes of extreme importance for the trade
from the USA but also from Europe to China are
expected this year.

By its own admission, the last 18 months has been
‘hell’ for Able UK, the company at the centre of an
international storm surrounding the scrapping of
redundant merchant vessels from the US National
Defense Reserve Fleet. The following article reviews
latest developments in this saga and reflects the com-
pany’s determination to persist with its ship disman-
tling plans.

France’s leading environmental show Pollutec attract-
ed a record number of visitors and exhibitors to the
latest event held in Lyon at the end of 2004. Top prize
in the category ‘Environmental Innovation for Europe’
awards was secured by Belgium-based Umicore for its
VAL’EAS closed-loop solution for recycling lithium-ion
batteries. Pollutec also showcased new and recent
products aimed at the recycling industry.

Steepling freight rates have been sin-

gled out as the main reason behind the

cate that a total of 498 ships were broken in

with Asia remaining a major focus of world

while, moves at international level are tending

towards the creation of an environmentally sound

management regime for shipbreaking, although the

question arises as to how improved standards will

be financed. In this article, Recycling International

brings you an update on latest developments in the

Recycling in Russia
The push for

Changes ahead for USA/China scrap trade 16

‘Running a scrap company in Russia is a difficult
business,’ acknowledges Ildar Neverov. The 25-year
old has already achieved a huge amount in his com-
paratively short working life: as well as heading up
two scrap metal businesses, he is also working as an
Ambassador for the BIR world recycling body and is
even spearheading attempts to form a national scrap
association in Russia. In this article, he talks about
his burgeoning career in the scrap industry, as well
as his efforts to foster a healthier and better co-ordi-
nated Russian recycling sector.

Recycling in Russia: the push for progress 24

Index of articles published in 2004 50
In this issue

In the next issue 49

In 2004, Recycling International brought its readers
hundreds of interesting articles, covering for exam-
ple: the major recyclable commodities such as ferrous/
non-ferrous metals, recovered paper, plas-
tics, electronic scrap and textiles; company
profiles; reviews of congresses, conventions
and trade shows; spotlights on recycling
machinery and equipment, as well as on
their suppliers; international legislation;
technological developments and much more.
In this issue, we provide a breakdown of the
main articles featured in last year’s 10 issues
of Recycling International.