Subscribe
Europe Mills lower prices Lower-grade volumes traditional- ly increase in December but tend to slow again in January. Having re- duced their prices in the final month of last year, European mills have re- peated the move in January. De- ma...
Read the entire page 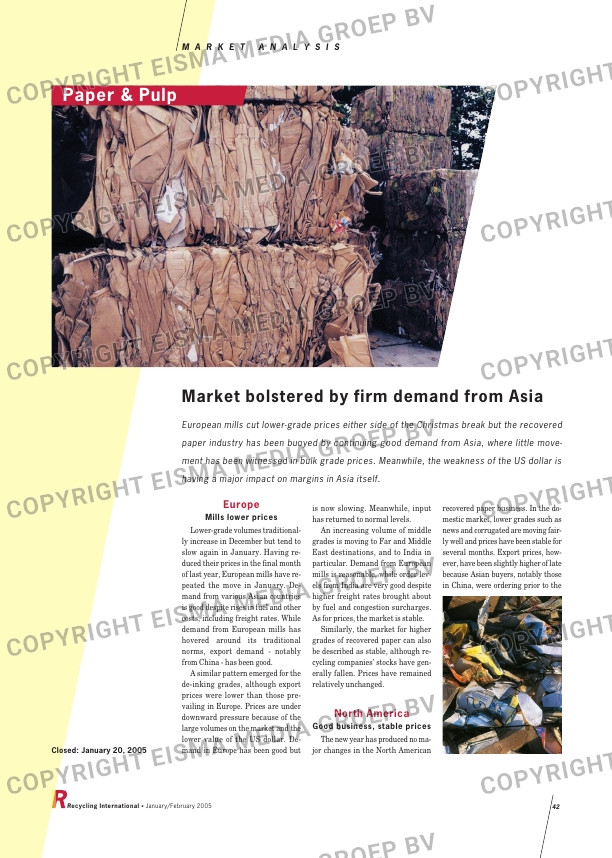 Lower-grade volumes traditional-
ly increase in December but tend to
slow again in January. Having re-
duced their prices in the final month
of last year, European mills have re-
peated the move in January. De-
mand from various Asian countries
is good despite rises in fuel and other
costs, including freight rates. While
demand from European mills has
hovered around its traditional
norms, export demand – notably
from China – has been good.

A similar pattern emerged for the
de-inking grades, although export
prices were lower than those pre-
vailing in Europe. Prices are under
downward pressure because of the
large volumes on the market and the
lower value of the US dollar. De-
mand in Europe has been good but

is now slowing. Meanwhile, input
has returned to normal levels.

An increasing volume of middle
grades is moving to Far and Middle
East destinations, and to India in
particular. Demand from European
mills is reasonable, while order lev-
els from India are very good despite
higher freight rates brought about
by fuel and congestion surcharges.
As for prices, the market is stable.

Similarly, the market for higher
grades of recovered paper can also
be described as stable, although re-
cycling companies’ stocks have gen-
erally fallen. Prices have remained
relatively unchanged.

recovered paper business. In the do-
mestic market, lower grades such as
news and corrugated are moving fair-
ly well and prices have been stable for
several months. Export prices, how-
ever, have been slightly higher of late
because Asian buyers, notably those
in China, were ordering prior to the

paper industry has been buoyed by continuing good demand from Asia, where little move-

ment has been witnessed in bulk grade prices. Meanwhile, the weakness of the US dollar is

having a major impact on margins in Asia itself.