Subscribe
M A R K E T A N A L Y S I S Non-Ferrous Closed: January 17, 2005 2004 was general ly considered to be a good year by Europe’s non-ferrous scrap industry, while 2005 is being viewed with moderate optimism. Despite a generally slow ...
Read the entire page 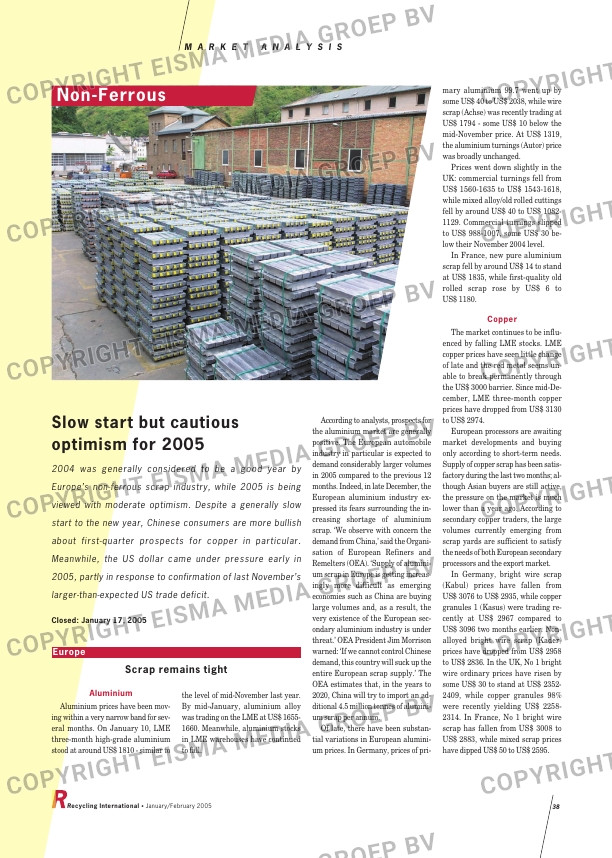 2004 was general ly considered to be a good year by

Europe’s non-ferrous scrap industry, while 2005 is being

viewed with moderate optimism. Despite a generally slow

start to the new year, Chinese consumers are more bullish

about f irst-quarter prospects for copper in particular.

Meanwhile, the US dollar came under pressure early in

2005, partly in response to confirmation of last November’s

Slow start but cautious
optimism for 2005

Aluminium prices have been mov-
ing within a very narrow band for sev-
eral months. On January 10, LME
three-month high-grade aluminium
stood at around US$ 1810 – similar to

the level of mid-November last year.
By mid-January, aluminium alloy
was trading on the LME at US$ 1655-
1660. Meanwhile, aluminium stocks
in LME warehouses have continued
to fall.

According to analysts, prospects for
the aluminium market are generally
positive. The European automobile
industry in particular is expected to
demand considerably larger volumes
in 2005 compared to the previous 12
months. Indeed, in late December, the
European aluminium industry ex-
pressed its fears surrounding the in-
creasing shortage of aluminium
scrap. ‘We observe with concern the
demand from China,’ said the Organi-
sation of European Refiners and
Remelters (OEA). ‘Supply of alumini-
um scrap in Europe is getting increas-
ingly more difficult as emerging
economies such as China are buying
large volumes and, as a result, the
very existence of the European sec-
ondary aluminium industry is under
threat.’ OEA President Jim Morrison
warned: ‘If we cannot control Chinese
demand, this country will suck up the
entire European scrap supply.’ The
OEA estimates that, in the years to
2020, China will try to import an ad-
ditional 4.5 million tonnes of alumini-
um scrap per annum.

Of late, there have been substan-
tial variations in European alumini-
um prices. In Germany, prices of pri-

The market continues to be influ-
enced by falling LME stocks. LME
copper prices have seen little change
of late and the red metal seems un-
able to break permanently through
the US$ 3000 barrier. Since mid-De-
cember, LME three-month copper
prices have dropped from US$ 3130
to US$ 2974.

European processors are awaiting
market developments and buying
only according to short-term needs.
Supply of copper scrap has been satis-
factory during the last two months; al-
though Asian buyers are still active,
the pressure on the market is much
lower than a year ago. According to
secondary copper traders, the large
volumes currently emerging from
scrap yards are sufficient to satisfy
the needs of both European secondary
processors and the export market.