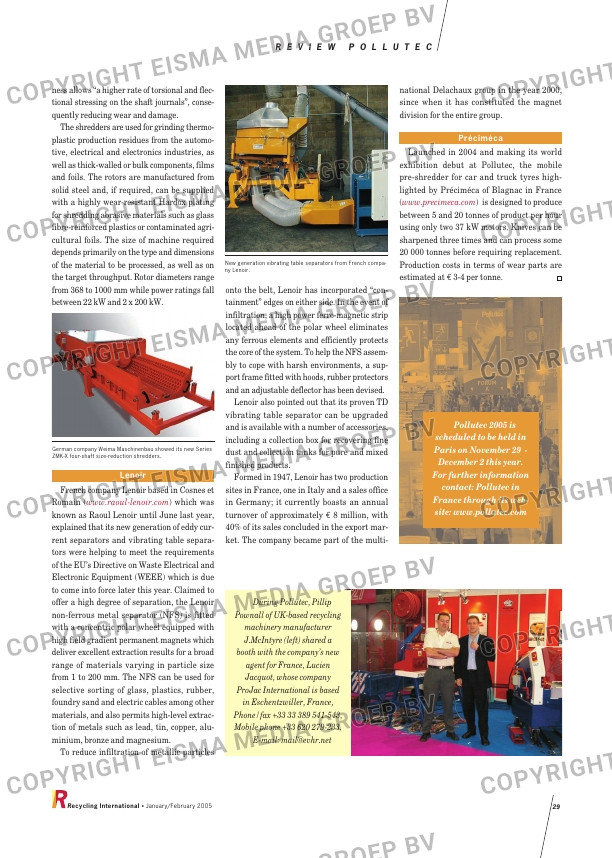 The shredders are used for grinding thermo-
plastic production residues from the automo-
tive, electrical and electronics industries, as
well as thick-walled or bulk components, films
and foils. The rotors are manufactured from
solid steel and, if required, can be supplied
with a highly wear-resistant Hardox plating
for shredding abrasive materials such as glass
fibre-reinforced plastics or contaminated agri-
cultural foils. The size of machine required
depends primarily on the type and dimensions
of the material to be processed, as well as on
the target throughput. Rotor diameters range
from 368 to 1000 mm while power ratings fall
between 22 kW and 2 x 200 kW.

French company Lenoir based in Cosnes et
Romain (www.raoul-lenoir.com) which was
known as Raoul Lenoir until June last year,
explained that its new generation of eddy cur-
rent separators and vibrating table separa-
tors were helping to meet the requirements
of the EU’s Directive on Waste Electrical and
Electronic Equipment (WEEE) which is due
to come into force later this year. Claimed to
offer a high degree of separation, the Lenoir
non-ferrous metal separator (NFS) is fitted
with a concentric polar wheel equipped with
high field gradient permanent magnets which
deliver excellent extraction results for a broad
range of materials varying in particle size
from 1 to 200 mm. The NFS can be used for
selective sorting of glass, plastics, rubber,
foundry sand and electric cables among other
materials, and also permits high-level extrac-
tion of metals such as lead, tin, copper, alu-
minium, bronze and magnesium.

To reduce infiltration of metallic particles

onto the belt, Lenoir has incorporated “con-
tainment” edges on either side. In the event of
infiltration, a high power ferro-magnetic strip
located ahead of the polar wheel eliminates
any ferrous elements and efficiently protects
the core of the system. To help the NFS assem-
bly to cope with harsh environments, a sup-
port frame fitted with hoods, rubber protectors
and an adjustable deflector has been devised.

Lenoir also pointed out that its proven TD
vibrating table separator can be upgraded
and is available with a number of accessories,
including a collection box for recovering fine
dust and collection tanks for pure and mixed
finished products.

Formed in 1947, Lenoir has two production
sites in France, one in Italy and a sales office
in Germany; it currently boasts an annual
turnover of approximately € 8 million, with
40% of its sales concluded in the export mar-
ket. The company became part of the multi-

national Delachaux group in the year 2000,
since when it has constituted the magnet
division for the entire group.

Launched in 2004 and making its world
exhibition debut at Pollutec, the mobile
pre-shredder for car and truck tyres high-
lighted by Préciméca of Blagnac in France
(www.precimeca.com) is designed to produce
between 5 and 20 tonnes of product per hour
using only two 37 kW motors. Knives can be
sharpened three times and can process some
20 000 tonnes before requiring replacement.
Production costs in terms of wear parts are
estimated at € 3-4 per tonne.

booth with the company’s new
agent for France, Lucien
Jacquot, whose company

Pollutec 2005 is
scheduled to be held in
Paris on November 29 –
December 2 this year.

France through its web-
site: www.pollutec.com