Subscribe
attended the show. More than 40% of all visi- tors were from general industry, including a significant proportion from the recycling sec- tor; a further 21% belonged to local and public authorities while more than 10% were man- agers from d...
Read the entire page 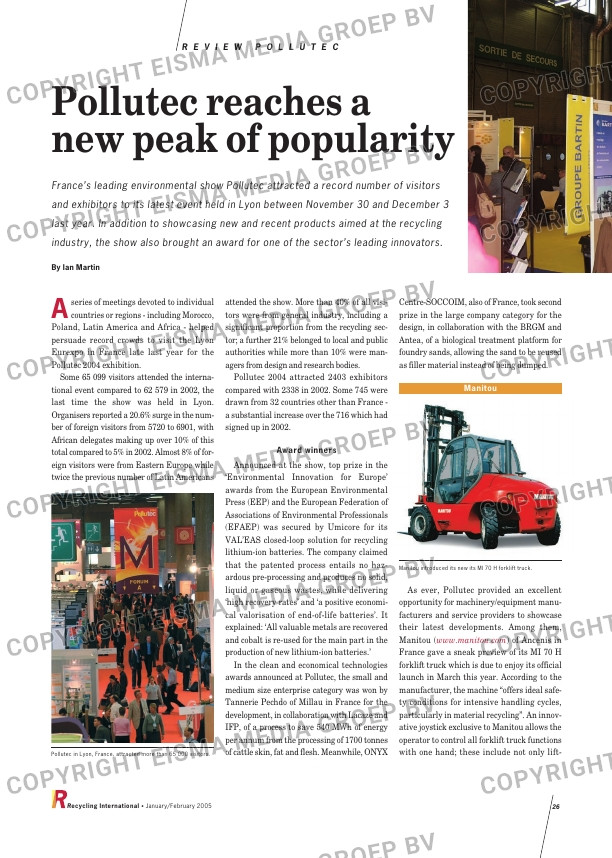 attended the show. More than 40% of all visi-
tors were from general industry, including a
significant proportion from the recycling sec-
tor; a further 21% belonged to local and public
authorities while more than 10% were man-
agers from design and research bodies.

Announced at the show, top prize in the
‘Environmental Innovation for Europe’
awards from the European Environmental
Press (EEP) and the European Federation of
Associations of Environmental Professionals
(EFAEP) was secured by Umicore for its
VAL’EAS closed-loop solution for recycling
lithium-ion batteries. The company claimed
that the patented process entails no haz-
ardous pre-processing and produces no solid,
liquid or gaseous wastes, while delivering
‘high recovery rates’ and ‘a positive economi-
cal valorisation of end-of-life batteries’. It
explained: ‘All valuable metals are recovered
and cobalt is re-used for the main part in the
production of new lithium-ion batteries.’

In the clean and economical technologies
awards announced at Pollutec, the small and
medium size enterprise category was won by
Tannerie Pechdo of Millau in France for the
development, in collaboration with Lacaze and
IFP, of a process to save 540 MWh of energy
per annum from the processing of 1700 tonnes
of cattle skin, fat and flesh. Meanwhile, ONYX

Centre-SOCCOIM, also of France, took second
prize in the large company category for the
design, in collaboration with the BRGM and
Antea, of a biological treatment platform for
foundry sands, allowing the sand to be reused
as filler material instead of being dumped.

As ever, Pollutec provided an excellent
opportunity for machinery/equipment manu-
facturers and service providers to showcase
their latest developments. Among them,
Manitou (www.manitou.com) of Ancenis in
France gave a sneak preview of its MI 70 H
forklift truck which is due to enjoy its official
launch in March this year. According to the
manufacturer, the machine “offers ideal safe-
ty conditions for intensive handling cycles,
particularly in material recycling”. An innov-
ative joystick exclusive to Manitou allows the
operator to control all forklift truck functions
with one hand; these include not only lift-

A series of meetings devoted to individualcountries or regions – including Morocco,
Poland, Latin America and Africa – helped
persuade record crowds to visit the Lyon
Eurexpo in France late last year for the
Pollutec 2004 exhibition.

Some 65 099 visitors attended the interna-
tional event compared to 62 579 in 2002, the
last time the show was held in Lyon.
Organisers reported a 20.6% surge in the num-
ber of foreign visitors from 5720 to 6901, with
African delegates making up over 10% of this
total compared to 5% in 2002. Almost 8% of for-
eign visitors were from Eastern Europe while
twice the previous number of Latin Americans

last year. In addition to showcasing new and recent products aimed at the recycling

industry, the show also brought an award for one of the sector’s leading innovators.