Subscribe
A t the age of 25, Ildar Neverov has alreadyachieved a huge amount in his comparatively short working life. As well as heading up two scrap metal businesses, he is also working as an Ambassador for the BIR world recycling body and is even s...
Read the entire page 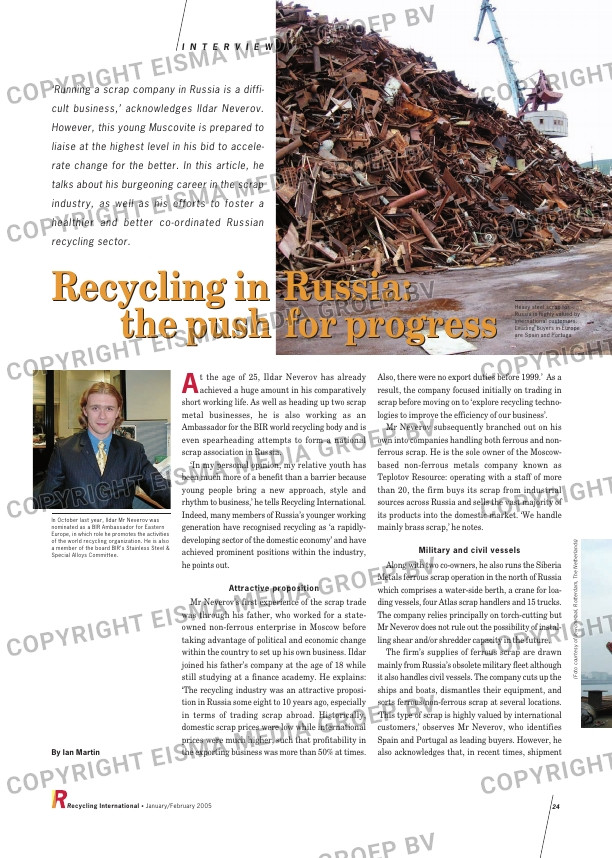 A t the age of 25, Ildar Neverov has alreadyachieved a huge amount in his comparatively
short working life. As well as heading up two scrap
metal businesses, he is also working as an
Ambassador for the BIR world recycling body and is
even spearheading attempts to form a national
scrap association in Russia.

‘In my personal opinion, my relative youth has
been much more of a benefit than a barrier because
young people bring a new approach, style and
rhythm to business,’ he tells Recycling International.
Indeed, many members of Russia’s younger working
generation have recognised recycling as ‘a rapidly-
developing sector of the domestic economy’ and have
achieved prominent positions within the industry,
he points out.

Mr Neverov’s first experience of the scrap trade
was through his father, who worked for a state-
owned non-ferrous enterprise in Moscow before
taking advantage of political and economic change
within the country to set up his own business. Ildar
joined his father’s company at the age of 18 while
still studying at a finance academy. He explains:
‘The recycling industry was an attractive proposi-
tion in Russia some eight to 10 years ago, especially
in terms of trading scrap abroad. Historically,
domestic scrap prices were low while international
prices were much higher, such that profitability in
the exporting business was more than 50% at times.

Also, there were no export duties before 1999.’ As a
result, the company focused initially on trading in
scrap before moving on to ‘explore recycling techno-
logies to improve the efficiency of our business’.

Mr Neverov subsequently branched out on his
own into companies handling both ferrous and non-
ferrous scrap. He is the sole owner of the Moscow-
based non-ferrous metals company known as
Teplotov Resource: operating with a staff of more
than 20, the firm buys its scrap from industrial
sources across Russia and sells the vast majority of
its products into the domestic market. ‘We handle
mainly brass scrap,’ he notes.

Along with two co-owners, he also runs the Siberia
Metals ferrous scrap operation in the north of Russia
which comprises a water-side berth, a crane for loa-
ding vessels, four Atlas scrap handlers and 15 trucks.
The company relies principally on torch-cutting but
Mr Neverov does not rule out the possibility of instal-
ling shear and/or shredder capacity in the future.

The firm’s supplies of ferrous scrap are drawn
mainly from Russia’s obsolete military fleet although
it also handles civil vessels. The company cuts up the
ships and boats, dismantles their equipment, and
sorts ferrous/non-ferrous scrap at several locations.
‘This type of scrap is highly valued by international
customers,’ observes Mr Neverov, who identifies
Spain and Portugal as leading buyers. However, he
also acknowledges that, in recent times, shipment

‘Running a scrap company in Russia is a diffi-

However, this young Muscovite is prepared to

liaise at the highest level in his bid to accele-

rate change for the better. In this article, he

talks about his burgeoning career in the scrap

industry, as well as his efforts to foster a

Recycling in Russia:
the push for progress

Heavy steel scrap for
Russia is highly valued by
international customers.
Leading buyers in Europe
are Spain and Portuga

In October last year, Ildar Mr Neverov was
nominated as a BIR Ambassador for Eastern
Europe, in which role he promotes the activities
of the world recycling organization. He is also
a member of the board BIR’s Stainless Steel &
Special Alloys Committee.